When Steve Silverstein returned to the ’burbs of Boston after sampling life in New York City and Colorado, he faced a dilemma that could have been hatched by a James Bond villain. He could take over his father’s ailing textile business and try to revive a structured organization that was likely to die regardless of what he did. Or he could roll the dice on a feeling he had that consumers were yearning for something they might not know they wanted. Go with something already built but wheezing, or take a chance in a notoriously risky field in which he had no experience or access to capital or virtually anything other than interest, desire and energy? 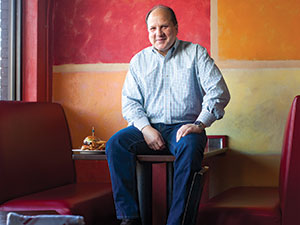 It was a no-brainer for someone who professes to enjoy risk: He’d build a restaurant company.

Twenty years later, Not Your Average Joe’s is pushing past $75 million in annual sales, with 22 restaurants in six states. The business plan calls for raising revenues to $100 million for 2015, adding five stores and laying the groundwork for a public stock offering in 2017.

Many in the business regard Silverstein’s brainchild as a high-flyer reminiscent of The Cheesecake Factory, with chefs in the polished-casual chain’s kitchens preparing 55 items from scratch. Like Cheesecake, Joe’s also enjoys higher sales volumes than most national casual-dining chains can boast. Units average $3.2 million to $4.2 million annually, depending on the generation of design they sport. “We have an $18 average check, so we’re around what you’d pay in an Olive Garden,” says Silverstein, who’s added “CEO” to his designation as founder.

Others see the company as proof that an entrepreneur can grow into an adept corporate leader and infrastructure builder. Silverstein never relinquished the helm, though he did reach out to big-name operator-investors —such as Ned Grace, the founder of The Capital Grille—to be his Obi-Wan Kenobis. He also enlisted the private-equity firm Bruckman, Rosser, Sherrill & Co. as an investor in 2012 to fund the company’s growth without amassing debt.

Changes have been made, but the constants might outweigh the tweaks, starting with the staff. “Nobody has ever quit,” says Silverstein. “There’s something compelling about working for Not Your Average Joe’s.” And that’s despite his admittedly hard-driving way of leading the staff.

“I haven’t bought their love; I’m not, by nature, a very easy person to love,” he says. “I’m a really driven, high-energy person who demands a lot from my people, and I push them very hard.”

But, he says, “I think they respect that I’m invested in what we do. I’m one of them, I just have a different job, the job of CEO. And I think they’d say, ‘He’s really hard on me, but he’s fair.’” Silverstein also makes a point of never asking his employees to do something he wouldn’t do himself, which is a sly way of admitting he’ll plunge into action if he sees something that’s not right or needs to be done in a store.

The rationale for the concept remains the same as it was in 1994. “When I came back to New Bedford, Mass., there weren’t any really good restaurants out in the suburbs,” Silverstein recalls. “You had to go to Boston or New York if you wanted something that was chef-driven.” Yet people in the suburbs had desire to dine out, money to indulge and taste.

Not Your Average Joe’s was intended to fill that gap, and Silverstein still puts stores in suburbs and secondary cities. The most recent addition to the chain, for instance, was in Nashua, N.H., and he’s gone as far afield as Glen Mills, Pa., and Leesburg, Va.

Opening the first restaurant with virtually no experience (“The only jobs I’ve technically held in the business were busser and host,” he says) was not as tough as establishing some of the stores that followed. “Units four, five and six opened in the next 18 months,” he says. “We made a lot of mistakes. None of them lived up to expectations, and one closed.”

The experience taught him the importance of “being more financially oriented and sorting out the objective from the subjective,” says the 55-year-old. And that meant looking beyond food, design and other artsy aspects of the business to nuts-and-bolts issues such as site selection. “The one thing I can’t fix is real estate,” he says. “If a restaurant doesn’t open well, it’s hard to get it back on track.” The importance of securing “‘A’ locations in ‘A’ markets” had an effect on investment, prompting Silverstein to expand his concept’s footprint three years ago to 6,500 square feet, from 4,500.

A painful learning experience came in 2007, when the chain’s computers were hacked and customers’ credit-card information was exposed. “It almost put the company out of business—it was a near-death experience,” says Silverstein. “It changed how I thought about the company, about debt versus equity, about profitability, about how the company is financed.” All in all, he reflects, “for as many things that have gone right, things have gone wrong.”

So why not cash in and savor the correct bet he made 20 years ago? “My belief is that my tomorrow will provide more of an opportunity than today.”