Tropical Smoothie Cafe on Thursday said it has named Charles Watson its permanent CEO as it works to grow into a $1 billion company within five years.

Watson has worked for the brand for more than 10 years and has been its chief development officer since 2015. The company says he is directly responsible for selling more than 800 franchises in his time with the company. 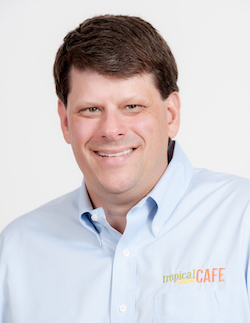 He had been operating as the brand’s interim CEO since the departure of Mike Rotondo, who left for a job with Edible Arrangements last July.

“Charles has the tenacity, vision, and passion this brand needs to continue our upward trajectory and will ensure the success of our franchisees is at the center of every decision we make,” Tropical Smoothie Chairman Scott Pressly said in a statement. “He has been instrumental in developing the culture of Tropical Smoothie Cafe and earning the trust of our franchisees.”

Watson takes over a company that is eager to continue its expansion. The company has more than 720 locations nationwide but says it is on track to more than double that, to 1,500, within five years—by which time it will generate more than $1 billion in annual sales.

That would be substantial growth from its current level: Tropical Smoothie generated just less than $400 million in system sales in 2017, according to Technomic, though that had grown by 25% over the previous year.

Watson said in a statement that Tropical Smoothie “has truly become a part of my DNA over many years.”