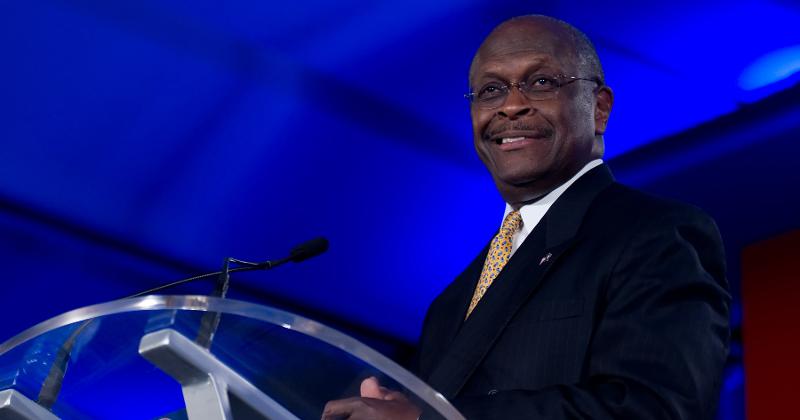 Herman Cain, the one-time chain executive who went on to lead the National Restaurant Association (NRA) and then run for president of the United States, has died due to complications from COVID-19. He was 74.

Cain had been hospitalized for weeks after contracting the illness, which many speculated was contracted at a Republican Party rally for President Trump. Those assertions have not been verified.

News reports indicated that Cain had been doing better in recent days, though he continued to draw off a supplemental supply of oxygen to ease his breathing. Often with COVID cases, patients are on an upswing when they suddenly crash and die.

Cain first came to prominence as the CEO of Godfather’s Pizza, which was owned at the time Pillsbury, then also the parent of Burger King, Steak and Ale and Bennigan's. The Georgian native had risen to that post after being trained as a mathematician and serving in the Navy. Earlier, he had been a regional manager of Burger King.

He became a popular speaker at industry events, in part because of his booming voice and knack for storytelling. Among the tales he shared were recollections from his upbringing, such as the day his father proudly brought the family to see the house he had worked so hard to afford. The elder Cain  had been the chauffer of the family whose predecessors founded The Coca-Cola Co., where the younger Cain would one day work as an analyst, and Mrs. Cain cleaned houses. Most of their son's life was spent in Georgia.

While leading Godfather’s, Cain joined the board of the NRA. He rose to become the one-year figurehead leader of the organization, right when President Clinton was pushing a form of employer-mandated universal healthcare. Cain followed the president from town meeting to town meeting, asking pointed questions of the nation’s chief executive to underscore that a requirement to insure every employee would devastate the restaurant industry. The argument he usually put forward: Why raze a house just because the roof is leaking? Why not fix the current healthcare network instead of launching a massive new bureaucracy funded by the business community?

His often-televised challenges of Clinton made Cain a star, both inside and outside of the industry. Around the same time, longtime NRA leader William Fisher stepped down to become an educator. In the NRA’s search for a successor, members of the selection committee kept reminding one another that they needed someone as dynamic and adept at leadership as Cain. Finally, members of the ad hoc group asked one another, Why not hire Cain?

He was the first Black person to lead the organization, but he downplayed the significance at the time.  “I can’t know how big of a deal this is because I’ve been Black all my life,” he joked at the time.

His tenure as NRA CEO drew mixed reactions. Persons inside the organization said his focus was often stretched thin by the number of initiatives he launched. Others faulted him for not investing more heavily in technology and other cutting-edge association tools.

Later, reports would surface of Cain sexually harassing women on the association’s staff. But at the time, the allegations were largely unknown outside of the organization.

In any case, his fame continued to grow. He was much in demand as a public speaker was known to break into song on occasion.

After leaving the association, Cain decided to become a political insider, initially as a radio commentator. His popularity continued to surge, leading to a decision to run for president in 2012 as the Republican Party’s nominee.  He proved a very capable debater, but many scoffed at his plan for closing the budget deficit while also cutting taxes. He called the plan 9-9-9, a summary of leveling a 9% national sales tax, cutting permanent income tax rates to a flat 9%, and reducing the tax rate on all corporations to 9%.

Economists dismissed the notion as wishful thinking. But some conservatives reacted positively.

Reports of Cain’s improper dealings with female staffers during his tenure at the NRA surfaced during his presidential campaign. With his poll numbers showing that he had little chance of defeating Mitt Romney for the Republican nomination, and the scandal growing, he dropped out of the race.

But he remained a loud voice in the politics of Georgia, and continued to work as a motivational speaker and commentator. He was admitted to a hospital in late June because of difficulties in breathing, after testing positive for COVID-19.