Paul Macaluso wasn’t eager to leave McAlister’s Deli, the growing chain he’d spent 18 months leading as its president. But it’s not every day that a person gets to be a company CEO, and certainly not one with an 86-year history.

So, he jumped at the chance to take over as CEO of The Krystal Co., the Atlanta-based burger chain founded in 1932.

“McAlister’s was a great brand, and I was having a lot of fun there,” Macaluso says in an interview. “But the opportunity presented itself to run a complete business as CEO. It was just something I couldn’t pass up.” 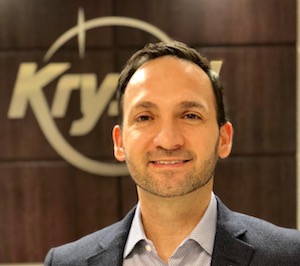 “I wanted to be part of an iconic brand and help it return to greatness,” he adds. “It’s a unique challenge.”

Krystal has struggled to generate positive sales the past two years, amid an overall difficult industry environment and growing competition, particularly in a burger category where top dog McDonald’s has been increasingly aggressive.

System sales last year were $394.5 million, down 6.3% over the past two years, according to Technomic's Top 500 Chain Restaurant Report. The chain operates 363 locations and has a $1.1 million average unit volume.

Macaluso believes Krystal can improve both marketing and operations, and spruce up its restaurants, to get its sales back into positive territory. That just so happens to fit his 25-year industry career.

Macaluso started off as a general manager with Yum Brands, working his way up to district manager and then several other management positions at Taco Bell before he moved into marketing, which is what he did with Burger King and then Sonic before moving to Moe’s Southwest Grill and Focus Brands.

“I started my career in operations and spent seven years starting as a restaurant manager and a district manager,” he says. “When I made the change to marketing, I was called the operations guy. Now I’m a marketing guy. I’ve had a perfectly navigated career to get the full range of all disciplines. And I have a real appreciation for the operations side of the business.”

Macaluso says he will first focus on marketing to improve the chain’s brand relevance. Krystal has some upside with its value, but he believes the company could use new products and advertising to get top-of-mind with customers.

The current market can be challenging. There are more restaurant chains and more restaurants than there’s ever been, so it can be difficult for a brand to make itself heard.

Indeed, many chains have been turning to marketing professionals as CEO. Note, for instance, that Chipotle hired Taco Bell’s CEO, Brian Niccol, who had come up through marketing.

Macaluso believes chains view marketing through a different lens now, as the growing importance of technology to the customer experience has more companies looking to marketers for their top executives.

But Krystal has some advantages, notably in the age of its brand and the built-in customer awareness. “In our markets, we’re talking about reigniting a passion for the brand,” Macaluso says. “It’s not like we have to explain who the brand is. People know. But maybe they’re not coming back as frequently because we haven’t been as innovative, exciting or clean. There’s some real advantages to that.”

Macaluso says the chain could use some operations improvement, but that there are already “good things happening in operations” at the chain. He just believes there’s some “upside,” with better execution and tools managers can use to be successful.

“Customer service and having a great facility are extremely important,” Macaluso says. “It’s table stakes for any brand.”

Macaluso would like to see a culture “where people are excited” about the future of the brand, but where there is a “heightened level of accountability and a sense of urgency.”

Then there are the restaurants themselves.

One of the challenges at an older brand is the look of its real estate. And many of Krystal’s biggest competitors are aggressively overhauling the look of their stores.

“That’s certainly an issue with older brands,” Macaluso says. “Fast-casual restaurants are newer and they have newer facilities. Our facilities are an issue with a brand of our age. That to me is the only concern.”

Macaluso says he learned about the importance of culture and brand positioning, and innovation, while at McAlister’s. And he believes that Krystal could do more to advertise itself through digital media, rather than simply relying on traditional forms of advertising.

The goal, Macaluso says, is to spend the next year to year and a half getting the chain’s sales and profits right. Once that happens, Krystal could consider adding new units again.

“Once we solidify the profitability and the top line sales, we will have the ability for future development, both company stores and franchises,” he says.