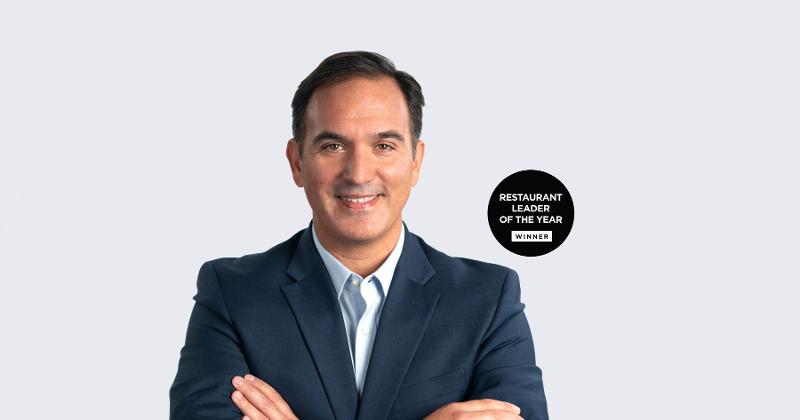 Restaurant Brands International CEO José Cil, whose company ignited a chicken sandwich war that has engulfed much of the restaurant industry, is the 2021 Restaurant Business Restaurant Leader of the Year.

Cil beat out a distinguished group of finalists to win the award, which recognizes an industry CEO for their performance from the past year.

“I’m very grateful to our talented RBI team, for their focus on always doing the right thing, their commitment to putting people and purpose first and their perseverance to overcome the largest business challenge of our lives,” Cil said. “They act like owners every day and are one of the major reasons why the business is so healthy today.

“It’s also important for me to acknowledge our incredible franchisees from around the world. Their partnership and long-term commitment is the foundation and the strength of our business.”

Wendy’s Todd Penegor, Wingstop’s Charlie Morrison, Bloomin’ Brands Dave Deno and Papa John’s Rob Lynch were also finalists for the award—which was chosen by reader survey for the first time in its six-year history this year.

Cil has been the CEO of RBI, the owner of Burger King, Popeyes Louisiana Kitchen and Tim Hortons, since 2019. In being named Restaurant Leader of the Year, he joins a distinguished list of top chief executives, including Panera Bread Founder Ron Shaich, Chipotle Mexican Grill CEO Brian Niccol and Union Square Hospitality Group Founder Danny Meyer.

In 2019, Popeyes introduced the chicken sandwich, a product so popular that its restaurants ran out of supplies within two weeks and the chain pulled it off the menu for several weeks. During that time, the chain sourced more ingredients, staffed up and provided more training and reintroduced the sandwich that November.

The result was the single strongest same-store sales quarter for a single chain in modern industry history. Sales continued to show strength through last year—even while dozens of restaurant chains introduced their own versions of upgraded chicken sandwiches. That includes Burger King, which debuted its own upgraded sandwich this year.

It also took Popeyes from a brand that relied on families buying whole meals to one where solo consumers visit its drive-thrus in the middle of the day.

“It now becomes an opportunity for the single user, the traditional QSR customer that goes there for lunch,” Cil said in an interview. “You open up that business, which we didn’t have much of. It brought a ton of volume, especially during the lunch daypart.”

At Tim Hortons, RBI had to rethink the company’s strategy after weak performance in Canada, where the brand is an institution. The doughnut chain has overhauled much of its executive team there, upgraded the coffee, remodeled stores and invested in marketing, only to watch the pandemic hit and block a turnaround.

Still, the chain has demonstrated improving sales as Tims rethought its approach. “We had to take the time to understand what we need to do,” Cil said. “Even before that we had to build the right team for the long-term in Canada in Tim Hortons.”

RBI’s most notable accomplishment has been its international growth with Burger King, which Cil helped lead in its early years. The company used a series of unique joint venture partnerships with master franchisees in different markets, a strategy that has helped speed growth outside the U.S.

The company is using that strategy with both Tims and Popeyes. “For both brands there is a tremendous opportunity for growth,” Cil said.