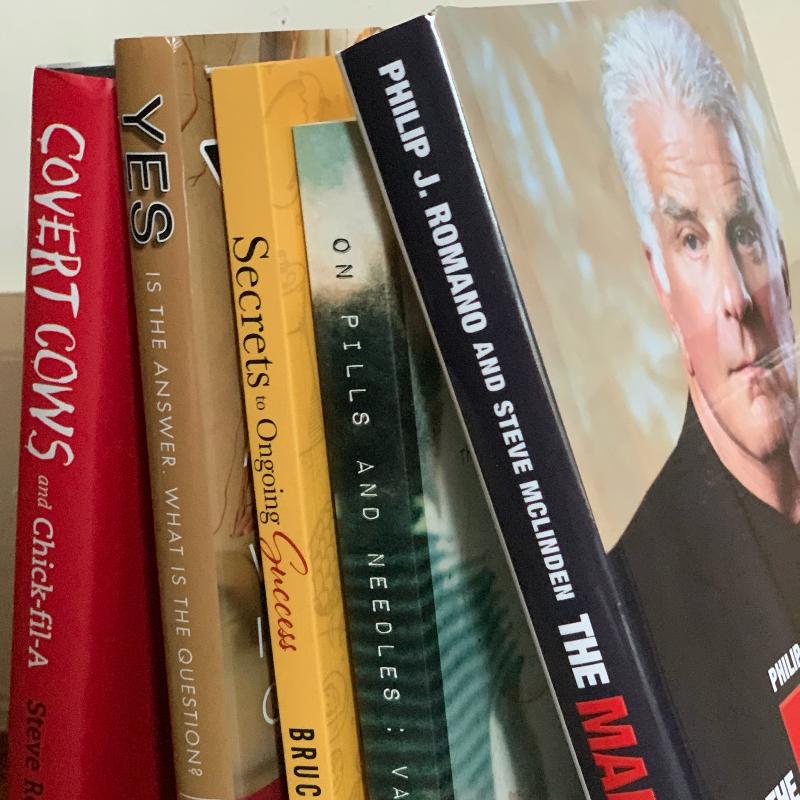 Given the seasonal peculiarities of the restaurant business, a guide to the mainstream’s summer rituals may be in order. First, while operators scurry to capitalize on the trade’s busiest season, people from other fields are prone to fits of hibernation, usually triggered by occupation of a hammock, beach chair or chaise lounge. Families baste each other in goop called “sun block” to counter the dangers of lying under a broiling sun, which they voluntarily do for hours. Scientists continue to study the sudden lapse in appreciation of shade.

Then there’s the propensity to read the books that have piled up on nightstands and desks for months. At least restaurateurs can indulge that summertime passion, since it requires little more than light and a few minutes snatched between rush times.

Here are five reads that are pertinent to the business, as written by some of its storied successes. They provide a dash of entertainment and insight for operators who hope to make the summer of 2019 a standout season businesswise.

“Covert Cows and Chick-fil-A: How Faith, Cows, and Chicken Built an Iconic Brand” by Steve Robinson

The marketing veteran who developed Chick-fil-A’s smash Eat Mor Chikin campaign looks back at how a brand run by a fundamentalist Christian family became a force of nonconformism in a field where copycatting is the rule. Robinson spent 34 years with the chicken chain. His slim volume (just 200 pages) is a first-person history of Chick-fil-A’s evolution into the contrarian megasuccess it is today.

Space is given to such familiar points of difference as the insistence of founder Truett Cathy that franchisees operate only one store each, and only six days a week. But it also brings to light overlooked rejections of the status quo, such as waiving royalties for chainwide marketing so operators would spend more on local engagement, and Cathy’s insistence that Chick-fil-A operate debt-free.

One of the book’s delights is the abundance of Robinson’s personal recollections of Cathy, a pioneer on the order of a Ray Kroc or a Colonel Sanders. Don’t expect any bombshell revelations (though Cathy’s insistence on having his 80th birthday party catered by The Varsity, a landmark Atlanta drive-in, comes close). Criticism of the founder is equally as rare. But the recollections provide a vivid picture of what it was like to work with the legendary chain builder day in and day out.

“Yes Is the Answer. What Is the Question?” by Cameron Mitchell

Any detractor who dismisses restaurant work as a dead-end career should be forced to read this recollection from famed Columbus, Ohio, restaurateur Mitchell.

Not that it’ll be a punishment, by any gauge. His account of rising from dishwasher to CEO of a $300-million-a-year restaurant empire is candid and straightforward, touching on pain points such as his father’s dissociation from the family, his mother’s personal struggles and his own disastrous life of crime (at age 15, his $7,000 drug fund was stolen during what would have been a big marijuana score).  This is no Pollyannish rags-to-riches account.

A reader who’s so much as eaten in a restaurant will find it an intriguing life story because of the human detail and blunt retelling. Someone in the business will likely find it more engaging because of the industry-specific situations that Mitchell highlights with candor, from running short of money right before two openings to servicing a $750,000 debt from a small company’s revenues. And he doesn’t hesitate to point out some of his blunders (such as committing to opening seven high-end restaurants in 18 months at a projected cost of $22 million) along with the triumphs (selling a 19-unit seafood chain and three steakhouses to Ruth’s Chris for $94 million).

Mitchell also pays considerable attention to what culture he wanted for his organization, and how he cultivated it.

If someone wants to test their decision-making prowess against the judgment of a proven success such as Mitchell, this is the book for them.

“The MAD Entrepreneur” by Phil Romano

The author is actually listed on the book as Philip J. Romano, but no one has likely addressed Phil that formally since grade school.

An army of acquaintances know him professionally as the creator of restaurant ventures such as Trinity Groves, Romano’s Macaroni Grill, Shuckers, Rudy’s, Eatzi’s, Fuddruckers, Cozymel’s, Spageddies and We Oui, to name a few of his 30-plus brainchildren. He has also invested in startups ranging from a developer of cardiac medical devices to a men’s clothing business called Baroni’s.

Personally, they know him as the free thinker who made a fortune by hatching quirky, ground-breaking restaurant concepts and selling them to Brinker International for truckloads of stock. Wealth never curbed Romano’s eccentric ways, from having a child at an age when many men were getting accustomed to being called grandpa, to refusing to wear socks.

They wouldn’t be surprised to hear that Phil refers to himself in his second book as a mad entrepreneur. Yet the title has nothing to do with mental balance or ire. “MAD” is an acronym for the philosophy that Romano puts forth: Make a difference. He attributes that all-out approach to his father, Samuel, who counseled the younger Romano to build the world’s biggest and best hot dog stand if that’s where his heart took him.

At age 79, Romano is still following that quest to make a difference with his ideas for restaurants. A chapter is devoted to the concepts he’s midwifed since 1996, when he seemingly pulled back to spend time on raising his family and pursuing a second career as an artist.

Most of the book delves into Romano’s attitudes toward life and values, recounted in a fashion more reminiscent of a conversation with Phil than a priestly lecture. It makes a reader wonder why he never tried a stand-up comedy club as one of his concepts.

“On Pills and Needles” by Rick Van Warner

The gift of this book is perspective. The worst days of a restaurant career may not seem that bad after reading this account of Van Warner’s hellish but successful attempt to snatch his son back from an opioid addiction.

There’s no professional anguish equal to learning your boy was technically dead from an overdose before authorities managed to restart his heart. What could have transpired during the author’s days at Darden Restaurants and Tijuana Flats to equal the heartbreak of finding your boy curled up and shivering on the cement floor of an abandoned building, unable to recognize you?

The heart-wrenching story is told in a clear, straightforward narrative that reflects Van Warner’s prior life as a journalist (he’s a former editor of Nation’s Restaurant News). The prose captures the pain without choking out hope, as when he and another son maneuvered unsuccessfully to kidnap the addicted youngster and bring him home. A few days later, to everyone’s surprise, the boy came home on his own. With fits and starts, he would survive and pursue a different life.

The book is strong testament that there are more important things in life than keeping comps positives and shareholders happy.

The co-founder of the Fresh City salad chain taps his lifelong experience in restaurants (he started in the family’s operation at age 13) to deliver 34 observations, each its own chapter, on what brings and sustains success in the business.

Each assertion is explained through recollections of Reinstein’s experiences, from driving an ice cream truck to networking at industry events. To make sure the first-person illustrations work, the chapters conclude with a list of the major points.

The observations range from the importance of transparency and candor (“Don’t BS me!”) to the fundamental need for a strong team.

For a highly personal account of best practices, this is your book.