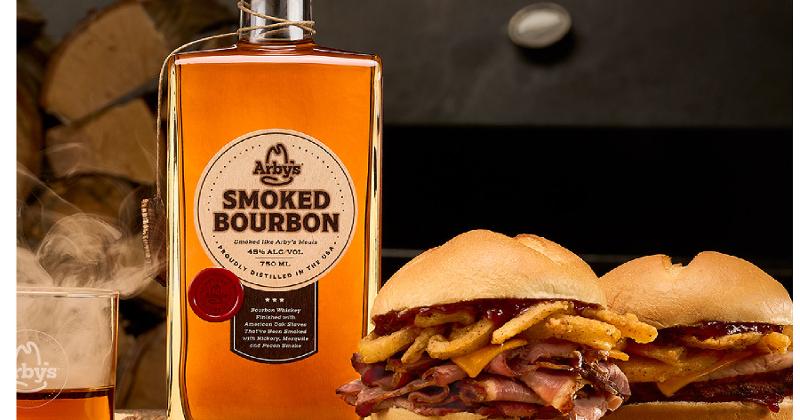 Arby's Smoked Bourbon is infused with the same smokehouse flavor as its brisket and rib sandwiches./Photo courtesy of Arby's

Customers who crave the flavor of Arby’s Smoked Brisket Sandwich may want to pair it with a shot of the chain’s new branded smoked bourbon.

Following on the success of its French fry-infused vodka last November, the Atlanta-based fast-food chain announced the launch of limited-edition Arby’s Smoked Bourbon on Monday. It’s available beginning Wednesday exclusively at ArbysSmokedBourbon.com for $60 plus tax.

On its first day of sale, Arby’s Curly and Crinkle Cut Fry Vodka sold out in minutes.

To create the bourbon, Arby’s partnered with custom craft distiller Doug Hall, CEO and co-founder of Brain Brew in Cincinnati. Hall captured the flavor of the chain’s signature Smoked Brisket and Real Country-Style Rib sandwiches, both of which are layered with meats that are smoked long and slow at Sadler’s Smokehouse in Texas and distributed to Arby’s locations.

The smoked bourbon is infused with the same flavor as the meats. To create the flavor, American oak is smoked with hickory, mesquite and pecan smoke at Sadler’s. The smoked oak is placed in the bourbon and Brain Brew finishes the smoking process and bottles the spirit.

Arby’s suggests pairing a glass of the smoked bourbon with either the rib or brisket sandwich to get the full experience.

“After our successful vodka launch last year, we knew we wanted to release another unexpected liquor that our fans of legal drinking age can responsibly pair with our menu items,” Jim Taylor, president of Arby’s, said in a statement. “Arby’s smoked meats are the cornerstone of our brand, so why not use our expertise to create a delicious smoked bourbon that complements the flavors and enhances the experience of enjoying our Smokehouse Sandwiches?”

As was the case with its vodka, Arby’s expects the branded bourbon to sell out quickly, but a second drop is planned. Consumers that sign up to become an Arby’s member before Oct. 19 at 11:59PM ET will get early insight into when there will be a second chance to score a bottle.