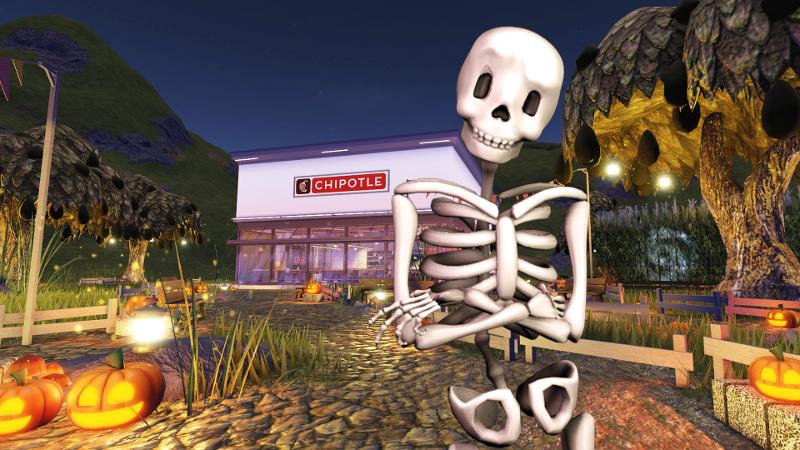 Chipotle Mexican Grill is giving away $1 million in burritos via a virtual restaurant it has created on the gaming platform Roblox, the fast casual announced Tuesday.

Starting Thursday and running through Halloween, Roblox users can enter the Chipotle Boorito Maze experience to be one of the first 30,000 users each day to receive a code for a free burrito or other entrée.

Before entering the virtual restaurant, Roblox players can dress up their avatar in Chipotle-inspired costumes such as Chip Bag Ghost, Burrito Mummy, Spicy Devil, Guacenstein and more, the company said.

Players can then complete a maze that lets them collect branded virtual items for their avatar.

The Roblox tie-in is the latest iteration of Chipotle’s Halloween Boorito promotion that has been running since 2000.

“As a digital innovator, we are always experimenting on new platforms to meet our guests where they are,” said CMO Chris Brandt in a statement. “Roblox’s popularity has boomed over the past year, and we know our fans will be excited to celebrate the next evolution of Boorito in the metaverse.”

Last year, Chipotle gave out a half million buy one-get one Halloween entrée codes via TikTok, Twitter and Instagram for its Burrito promotion.

This year, Chipotle diners can use the digital-only promo code BOORITO to get a $5 entrée from 5 p.m. to close on Halloween.

Over the years, Chipotle has been a consistent innovator among restaurant brands on digital platforms. The burrito brand was an early restaurant entrant on TikTok. It used the platform to recruit workers earlier this summer, becoming an early adopter of its TikTok Resumes platform. Chipotle has also had a regular presence on gaming platform Twitch.