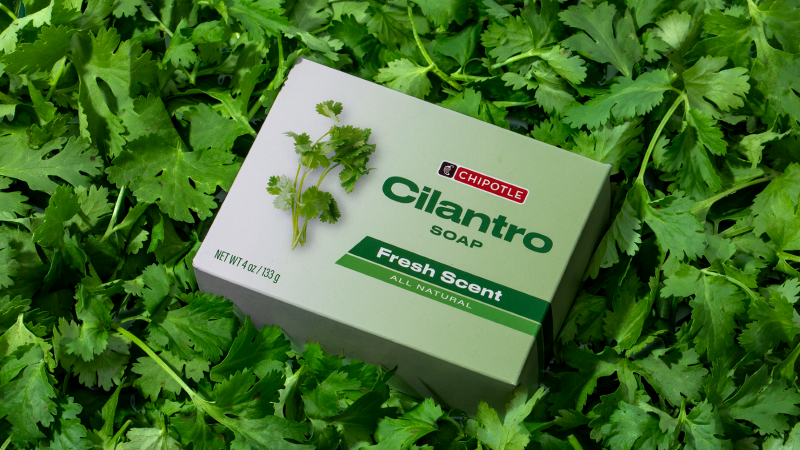 Watch out, cilantro-haters: Chipotle Mexican Grill is coming for you.

The Mexican fast casual is poking some gentle fun at the small segment of the population for whom the popular herb cilantro tastes like soap.

For $8, cilantro-lovers, haters and the herbally indifferent can purchase a bar of Cilantro Soap on Chipotle’s merchandise website—while supplies last. (The chain is even offering free ground shipping on all orders containing Cilantro Soap to sweeten the deal.)

Cilantro Soap got its start as a gag that Chipotle posted on Instagram in August, asking, “Oh but what if soap tasted like cilantro?”

“Our Cilantro Soap plays into a larger trend of turning digital moments into real life experiences,” CMO Chris Brandt said in a statement. “Every Chipotle fan, regardless of which side of the great cilantro debate they’re on, can appreciate this fan-inspired gift.”

Chipotle is extending the bit further, offering a Cilantro Lover badge to its rewards members who order menu items containing cilantro through Wednesday, allowing them to earn bonus points toward free food.

Chipotle is not the first chain to spin an actual product out of a joke.

Earlier this fall, Culver’s got widespread media coverage and monumental sales for its Curderburger. The giant cheese curd-topped burger started as an April Fool’s joke.

The real-life Curderburger, served about six months after that social media joke, sold out in less than two hours at nearly all of the quick-service chain’s locations.