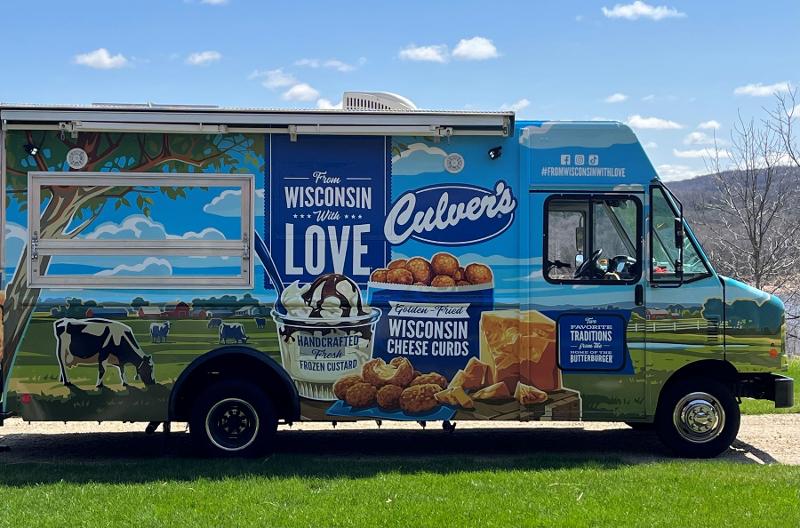 Craig Culver likes to believe that his burger chain Culver’s has exported a piece of Wisconsin around the country as it has expanded over the years. Now the company is making that clear in its new ad campaign.

The Prairie Du Sac, Wis.-based chain is kicking off a new campaign this week called “From Wisconsin With Love.” It features several new television spots and a 17-city food truck tour, some of which will involve Culver himself. The theme is about bringing some of what’s good about Wisconsin to other parts of the country.

“We’re taking Wisconsin on the road, so to speak,” Culver said in an interview. “We’ve exported a lot of people out of Wisconsin—especially when we decide to go to Florida and Arizona.”

The idea behind the television spots is to highlight the chain’s hospitality. The first ad features scenes of farm fields with customers getting together for made-to-order items from Culver’s menu. Craig Culver narrates the commercial and is seen scooping frozen custard in 1984. Culver cofounded the chain nearly 40 years ago.

“I’m a Wisconsinite,” Culver said. “When I think of Wisconsin I think of cheese. I think of dairy. That’s our custard. I think of high-quality things. That’s what we’ve been for years and years.”

But what gets Culver most excited is the food truck, which will give out free cheese curds and frozen custard. “I wanted a food truck for a long time,” he said. “We just never got it done. It’s so cool to see this thing. It’s a great piece of marketing for us.

The plan is to take the food truck to 17 cities total, 16 of which are planned. It starts this week in Indianapolis and then features several cities where the chain has expanded in recent years, including Tampa, Phoenix and Atlanta—though, Culver notes, “we don’t have a great presence there yet.” Customers can vote on the 17th city for the food truck tour in the “From Wisconsin With Love Sweetpstakes.” The contest runs from now through June 5.

For Culver’s, it’s an opportunity to build on a strong couple of years. System sales at the chain have grown 39% over the past two years, somewhat surprising given that the chain has long had a strong dine-in presence. But its drive-thrus grew more popular during the pandemic and customers frequently lined up at them for a Butterburger or a frozen custard. Culver’s has more than 850 restaurants in 25 states.

“Fortunately we had a drive-thru,” Culver said. “They had to learn a new way to do business. And we did a lot of business. We had a record year in 2020. We opened 50 restaurants. We finished with comp sales up 6%. That carried over into 2021.”

That has carried over into 2022, he said, though “I do see things slowing down right now. It concerns me. Like the pandemic, you’ve got so many things going against you,” he said. “Inflation is terrible. The supply chain is a struggle. I worry about this year a little bit.”

Still, Culver is enthusiastic about the food truck tour and the new ad campaign, which will take hold all year on television, social media, digital, radio and billboards.

“It’s expanding on our brand, but we’ll also have fun doing it,” said Culver, who will be on nine of the 17 food truck stops. “It’ll be a fun thing for me, as well as our team members in the support center. We hope to have a lot of those people visit.”