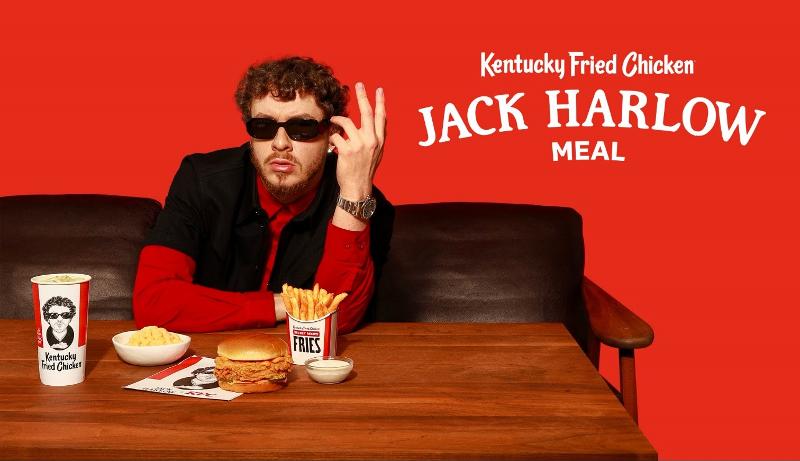 KFC is partnering with Kentucky native Jack Harlow on a limited-edition meal that the rapper curated from the chain’s existing menu.

“When KFC asked me to create my own meal, I knew it couldn't be just any meal. My meal brings together my childhood favorites from growing up in Louisville, the KFC Mac & Cheese, with my new go-to Spicy Chicken Sandwich (with plenty of ranch), Secret Recipe Fries, and lemonade—it doesn’t get much better,” Harlow said in a statement.

In teaming up with Harlow, KFC joins the growing wave of chains using celebrities and influencers to promote their brands. McDonald’s has had success collaborating with Mariah Carey, Travis Scott, J Balvin, Sawatee and BTS on its “Famous Orders” platform. The musician-endorsed meals helped drive sales of around 15% on a two-year basis.

Popeyes partnered with Megan Thee Stallion on a hot sauce, while athletes Russell Wilson, Tom Brady and Marshawn Lynch have promoted Subway sandwiches. In what looks like an effort to reach a younger demographic, Denny’s is tapping TikTok stars to endorse its pancakes.

On Saturday, customers in the Atlanta area can get an advance taste of the limited-edition meal before it launches nationwide. KFC is transforming a restaurant in Smyrna, Ga. into Jack’s Meal HQ. While scarfing down the Jack Harlow Meal, fans can listen to Harlow’s new album and other of the rapper's latest hits.

KFC and Harlow have also teamed up on a line of co-branded merch that will be available for a limited time, while supplies last.