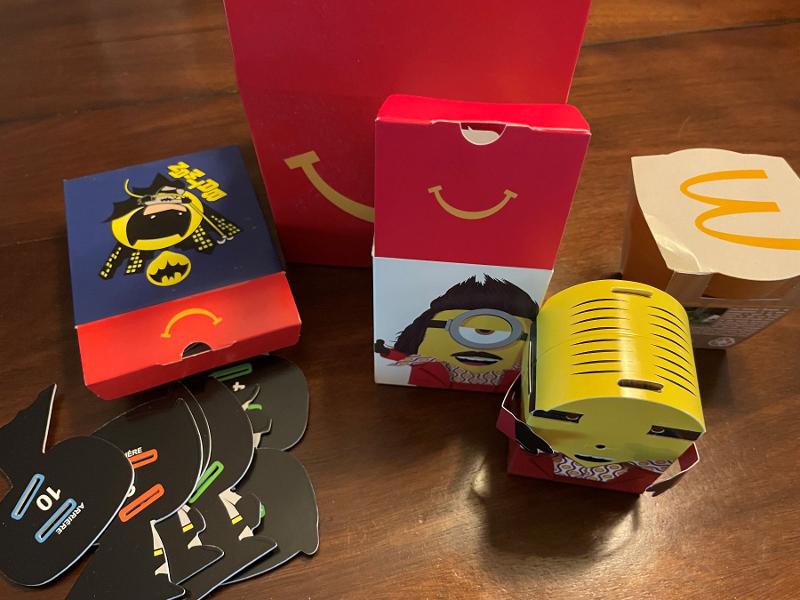 McDonald's is replacing its hard-plastic figurines in its Happy Meals with cardboard toys and games./Photo by Jonathan Maze

McDonald’s plans to remove the plastic in its Happy Meal toys by 2025, the company said Tuesday, a commitment that will replace some of the figurines and cars of years past with crafts, puzzles and games made from paper, cardboard or plant-based plastics.

The Chicago-based burger giant vowed to cut the use of virgin fossil-fuel-based plastic by 90% by the end of 2025. The company said this is equivalent to 650,000 people stopping the use of plastic every year.

The company described the move as significant, saying it will take years for it to shift its toy supply chain to reflect the new materials. Yet it’s one that the company said is rooted from consumer demand for less plastic in its toys and more sustainable materials.

“This is a huge step for us,” Amy Murray, vice president of global marketing for McDonald’s, told members of the media on Monday. “Our entire supply chain has to change with this. We’re really just transforming the way we do Happy Meals.”

McDonald’s Happy Meals are huge sellers for the chain, helping it draw millions of families into its restaurants. McDonald’s first created the Happy Meal in 1979 and the company currently sells more than 1 billion of them every year in all 100 of its markets. The popularity of the meal makes the company a massive buyer and seller of toys.

The company has already cut plastic use in its toys in the U.K., Ireland and France by 30% since 2018. Executives said the company’s toys will be changed in all of its markets and that customers can start seeing the new toys over the next several years.

“In a few years every Happy Meal toy everywhere around the world will be more sustainable,” Jenny McColloch, chief sustainability officer for McDonald’s, said in a statement.

The company said that toy figurines from movie characters will not go away and will be replaced by three-dimensional cardboard figurines—the example the company included was a 3D Batman figurine that kids can put together themselves.

But the toys will feature more games and crafts, such as a poster from the cartoon Teen Titans Go that kids color themselves.

Executives said the company has already started shifting away from its hard-plastic toys of the past, with fewer battery-powered items and more books. The company saw some success with a promotion in France giving parents the option of a toy or a book.

The company said the move is cost neutral, suggesting that this is not a cost-cutting move but a response to consumer demand. “We have been testing the toys with kids and parents,” Murray said. “We have a lot of work to do to get it right, making sure all the pieces are safe and sturdy.”

The move is just the latest by McDonald’s to improve its reputation among customers demanding more sustainable practices among restaurants. The company has vowed to cut back on greenhouse gas emissions, for instance, and is making investments in renewable energy. The company said that it was more than 80% towards its goal to source all of its packaging from renewable resources by 2025.