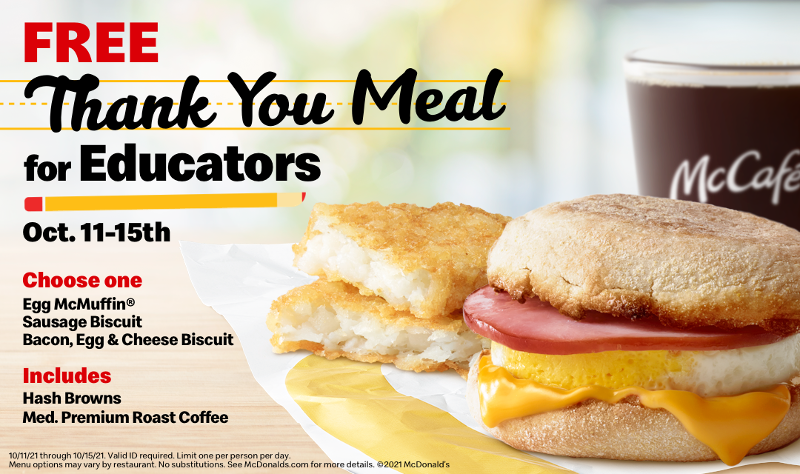 When Stefanie Cabrera Bentancourt’s Miami McDonald’s gives away free breakfast meals to teachers next week as part of its latest “Thank You Meals” promotion, she may well be handing out Egg McMuffins and coffee to her former coworkers.

Bentancourt was an elementary school teacher before she decided to take over her family-run McDonald’s location.

“The whole program is very near and dear to my heart,” Bentancourt said in an interview. “I love teaching. But it’s a very challenging profession. And it’s such a large contributor to our community, to our future and to society in general.”

McDonald’s latest Thank You Meal will give teachers the option of an Egg McMuffin, a Bacon Egg and Cheese Biscuit or a Sausage Biscuit, along with Hashbrowns and a medium coffee or soft drink. The meals will be served in a classic Happy Meal box. The “toy” will be a thank-you note. The meal will be available to any teacher, administrator or staff member who presents their work ID Monday through Friday next week, Oct. 11-15.

It’s a sequel to the successful Thank You Meal promotion the company offered during the depths of the pandemic last spring, when McDonald’s gave away some 12 million free meals to health care workers and first responders.

This time, the company targeted teachers, who have spent the past 18 months encountering all manners of challenges—on top of their existing challenges—so they can educate students.

“They’ve done so much in the last year and a half,” said Jennifer Healan, VP of U.S. marketing.

The company is also asking customers to share stories of their favorite teachers on Twitter, TikTok or Instagram using the hashtag #ThankYouMeal. “Everybody has a great teacher story,” Healan said. “We’re hoping to get this groundswell of gratitude.”

McDonald’s has long used promotions involving teachers and local schools as part of community outreach—notably through its “McTeachers Nights,” a fundraiser in which teachers and administrators of a local school work for an evening and invite students and their families to come in, with a portion of the proceeds are donated to the school.

The nights have raised the ire of some critics, including many educators, who say they indoctrinate kids into junk food culture.

Yet the nights have proven popular. Bentancourt likened it to a “night club,” at least in terms of how busy it gets.

“My first McTeachers Night was as a teacher,” Bentancourt said. Those nights became a victim of the pandemic because the crowds were forbidden.

Bentancourt, however, opted to do something else: A Teacher’s Night in the drive-thru, likening it to a “parade,” with teachers and administrators waving and holding signs. It was similar to the birthday parades many people held rather than parties.

McDonald’s is hoping that same community connection spreads across the country with its latest Thank You Meal.

Bentancourt said her restaurant gave 18,000 of the meals during the two weeks of the promotion. It also built connections with customers, she said. “We had no idea some of our customers were first responders,” she said. “It built a lot of relationships between us and our customers.”

The company believes that same result can happen with teachers this time around.