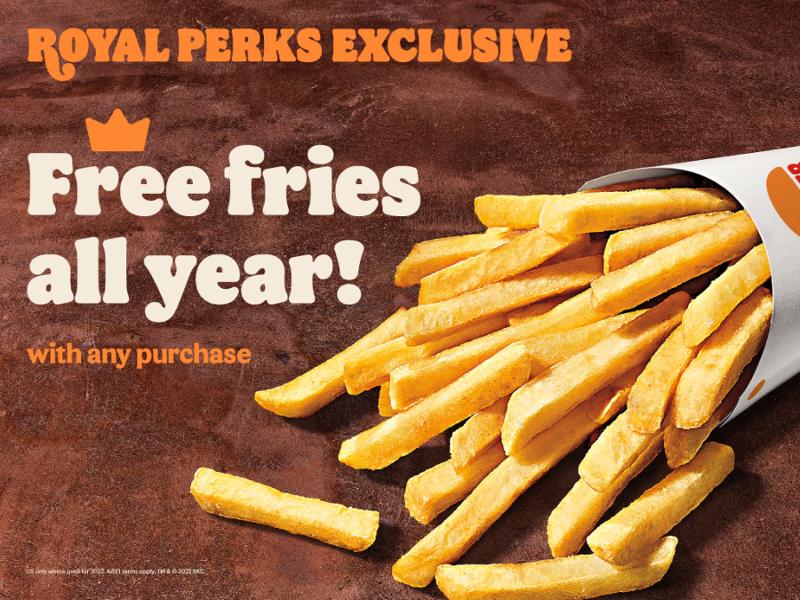 How valuable is your loyalty?

To restaurant chains, it’s incredibly valuable—both in terms of data collection and actual dollars spent when a customer signs up for a loyalty program.

They’re not quite handing out ponies or cars, but big brands do seem to be getting more aggressive in incentivizing loyalty.

Just this week, we’ve seen Burger King offer its Royal Perks members free fries every week for the rest of the year, with any purchase. Loyal customers, a.k.a “Frequent Fry’ers” in BK parlance, can choose whether they want a small, medium or large order of free fries. (Note: If you select “small,” I’m not sure we can be friends.)

Burger King’s Royal Perks program launched last September and the chain has been working to roll the rewards program into its drive-thru menu boards systemwide this year.  Just a month into the program, 80% of BK’s digital customers had already enrolled in Royal Perks, the burger brand said at the time.

Members of the MySnooze Bennyfits (not sure how I feel about this pun) program at the 52-unit chain can earn “jacks” whenever they purchase food.

The tiered rewards system allows diners to exchange jacks for free pancakes and nonalcoholic beverages in the lowest tier; score $5 off mimosas and Bloody Marys in the next tier; and earn free Snooze merch in the top tier.

We’ve seen a mountain of evidence of just how valuable these loyalty club customers are. Not only are restaurants able to collect data on them to craft one-to-one marketing messaging, but these customers simply spend more.

Chipotle Mexican Grill celebrated the three-year anniversary of its loyalty program last month, a rewards offering that has now grown to 27 million members. Those digital rewards users visit Chipotles more frequently and spend more when they do than non-rewards members. And now, with dining rooms fully reopened, the burrito chain is trying to figure out how best to convert the typical dine-in guest to sign up for Chipotle Rewards.

Earlier this month, Panera Bread changed up its coffee subscription program to include nearly unlimited access to all of the chain’s 26 self-serve beverages for $10.99 per month.

To join the Unlimited Sip Club, you have to be a member of the MyPanera loyalty program.

Panera is giving out free Unlimited Sip Club memberships through July 4 to incentivize sign-ups. And with good reason:

The chain found that members of its coffee subscription were visiting Panera eight times more often each month than non-subscribers. And they were spending up to 11 times more money at the chain annually than non-rewards members.

For that kind of payoff, maybe restaurant chains should start handing out a free pony with every rewards sign-up.

Friendly’s wants you to save room for ice cream

Friendly’s, the 80-year-old chain that has weathered plenty of ups and downs in recent years, launched a new multi-channel ad campaign this week to remind customers to “save room for ice cream.”

The marketing blitz is timed to coincide with the family dining chain’s biggest new menu launch in more than a decade, as well as the opening of its first fast-casual concept, Friendly’s Café.

In the 30-second ad, we see a diner considering getting another lobster roll before a “comically intimidating” Friendly’s ice cream server directs her to instead have an ice cream sundae.

“Our goal with the campaign is to remind everyone that Friendly’s is back and better than ever in a fun and memorable way,” Eric Kallman, one of the ad’s creators from Erich and Kallman said in a statement.

How restaurants are combatting multiple challenges

How foodservice operators are accelerating diversity, equity and inclusion initiatives