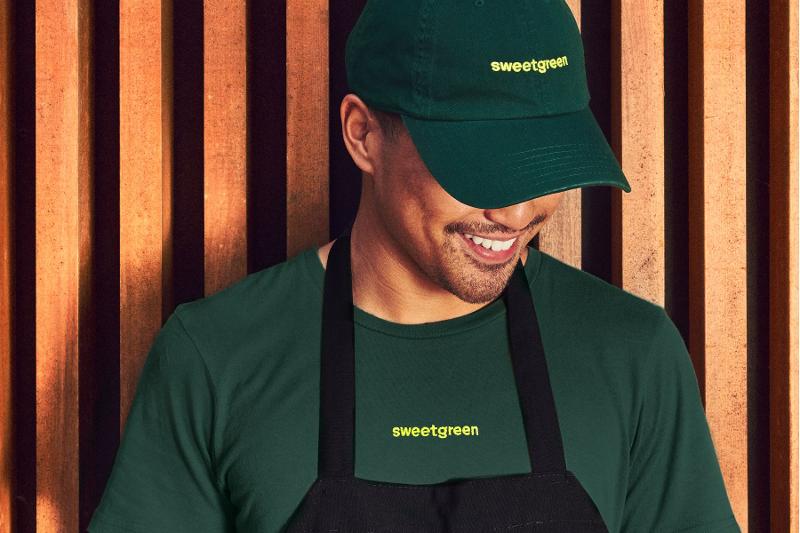 Sweetgreen is reimagining its visual identity, unveiling a new logo and other design elements that better express the concept’s vibe, the fast-casual salad chain announced Wednesday.

Some of the rebranding will be seen by guests starting today. Other aspects, such as new design elements in restaurants, will be rolled out over the next few years, the Los Angeles-based company said.

“At Sweetgreen, we create experiences that connect food and culture together and we want this brand identity to help reimagine what the fast food industry looks like in the years to come,” Nathaniel Ru, Sweetgreen co-founder and chief brand officer, said in a statement.

The most visible immediate change is to Sweetgreen’s logo, which remains all-lowercase. Unlike previous iterations, all of the letters are facing the correct way in this new logo which depicts the brand’s name in a bright chartreuse set against a dark green background.

The updated brand design will carry through the restaurants to marketing, advertising, social media channels, packaging, uniforms, signage and digital products such as Sweetgreen’s app.

“The goal was to create a flexible, sustainable design system that both reflects the culture of local communities and works at scale,” the chain said in a statement.

Sweetgreen is rolling out new food photography, menu designs and packaging to “show that fast food can be synonymous with real food,” the chain said.

Earlier this year, Sweetgreen announced an in-house creative agency. To create the new brand design, the chain worked with Collins, a strategy and design consulting firm.

Bloomberg reported earlier this month that Sweetgreen is working with Goldman Sachs on a potential IPO. Goldman declined to comment on the report and Sweetgreen did not respond to a request to comment on any such deal.

The chain, which has about 120 units, has long been a darling of investors, racking up a reported valuation of $1.6 billion in 2019.

But Sweetgreen struggled during the pandemic, laying off 20% of its corporate staff as traffic declined, especially in major urban areas. It recently announced an investment from its newest brand ambassador, tennis champion Naomi Osaka.