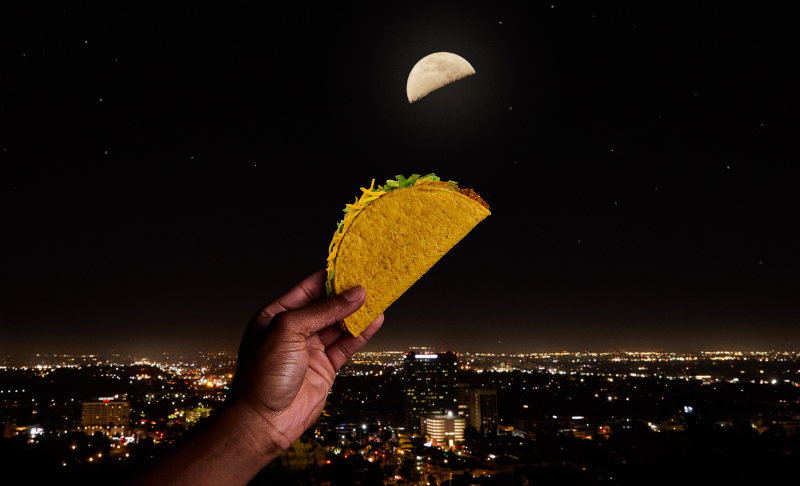 The moon may not be made of green cheese but it definitely looks like a taco twice a month.

Taco Bell, the Irvine, Calif., Mexican fast-food chain, is rebranding the quarter moon as part of the company’s first global marketing campaign. The “taco moon,” as the company calls it, will appear in the night sky on Tuesday, May 4.

“Once you see tacos everywhere, you can’t unsee it,” said Taylor Montgomery, head of international marketing for Taco Bell. “I don’t know if you’re a Harry Potter fan but whenever I see Dumbledore’s glasses I see tacos.” He was referring to the character whose half-moon glasses were a trademark.

Taco Bell is a U.S. powerhouse, the fourth largest restaurant chain domestically and one of its strongest performers. The company’s same-store sales in the first quarter rose 10% on a two-year basis, and David Gibbs, CEO of parent company Yum Brands, said on Wednesday that the brand is “hitting on all cylinders” right now.

International growth has been a bit slower, but the company has big plans to turn that around. Only 628 of the company’s locations are outside the U.S.—which runs counter to sister chains KFC and Pizza Hut, both of which have an enormous presence in international markets.

But Taco Bell wants that number to grow to 1,000 in the next couple of years as it works to grow to 10,000 locations globally in the coming decade. Taco Bell has more than 7,000 restaurants domestically.

The company is hoping global marketing in the chain’s famous irreverent style can help that process along. Taco Bell has not done a global marketing campaign, though it has certainly made an impression in some markets. In 2018 it announced its entrance into London by making it sound as if the city’s famous Big Ben clock was making the chain’s trademark bell sound—Big Ben was under construction and silent.

The “Taco Moon” promotion will take place everywhere, so customers at all the chain’s locations will be able to get a free taco to celebrate the moon.

“This is something only Taco Bell could do,” Montgomery said. He noted that the moon’s quarter phase looks an awful lot like a taco. “That was the ‘aha’ moment,” he said. “What’s the biggest billboard on planet earth? The moon. Any time there’s a quarter moon, we’re not going to brand it the ‘taco moon.’”

That the taco moon appears on May 4, the day before Cinco de Mayo—traditionally a big day for Taco Bell—was simply a matter of timing. “We can’t change when the moon looks like a taco,” Montgomery said.