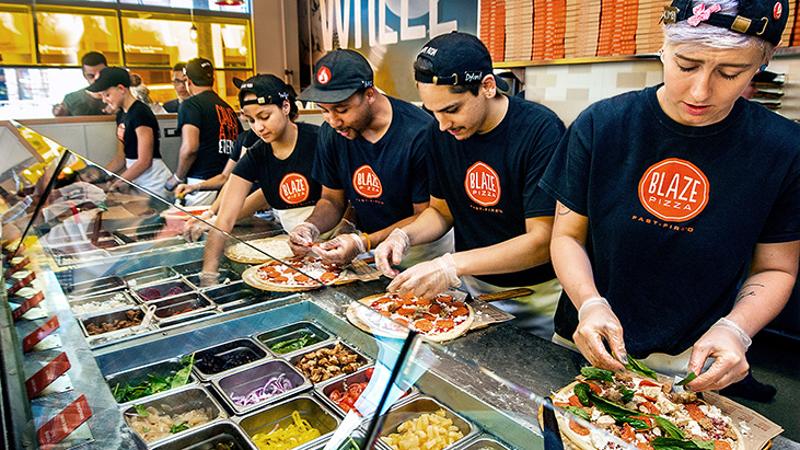 Cue the “Rocky” theme music: A preliminary ranking of U.S. restaurant chains by domestic sales and growth shows 2015 was the year of the challenger, with a number of big-name brands losing ground to brash upstarts and heavyweight innovators.

Among the old guard that hit the canvas, according to Technomic’s Top 500 Advanced Chain Restaurant Report: Subway, whose U.S. systemwide sales slid for a second year in a row, this time by 3.4 percent, or $400 million. The decrease came despite a slight gain in units.

In contrast, systemwide sales for Jimmy John’s rose by 17.2 percent on a 16 percent gain in store count, and Jersey Mike’s posted a 28.6 percent gain in the combined sales of corporate and franchised stores, which increased in number by 22.1 percent.

McDonald’s held onto the No. 1 position in the sales ranking, outstripping its closest rival, Starbucks, by $21.9 billion. With U.S. systemwide sales of $35.8 billion, McDonald’s domestic intake was still greater than the U.S. sales of the next three contenders combined.

Among the other insights revealed in the report, which will be released in final form, with additional data and analysis, in April:

The shift in the status quo was particularly evident in the pizza market. Pizza Hut’s systemwide sales were flat and its U.S. unit count slipped by 64 stores. Among the 500 chains measured by Technomic, three of the four fastest sales gainers were fast-casual pizza specialists (Blaze Pizza, Mod Pizza and Pieology, with systemwide sales increases of 204.8 percent, 181.5 percent and 67.3 percent, respectively.)

All of the top 10 chains and 17 of the top 20 were limited-service concepts. Two of the full-service brands that cracked the top 20, Applebee’s and Olive Garden, were basically static in unit growth and posted systemwide sales growth of under 3.6 percent. Only Buffalo Wild Wings, or what was once a limited-service concept, showed significant growth in casual dining, with systemwide sales growing 10.5 percent on a 7.7 percent increase in stores.

Officials of Pizza Hut’s parent company, Yum Brands, have contrasted the brand’s emphasis on quality and variety with archrivals’ focus on simplifying the ordering process for delivery customers. The latter strategy proved hugely successful for Domino’s, whose systemwide sales grew 14.1 percent with only a 2.6 percent increase in units.

Despite the softness in the sales of McDonald’s and several old-guard rivals (Wendy’s, for instance, increased its systemwide volume by just 1.6 percent), the burger segment showed considerable sales gains. The gainers included big established brands such as Burger King (with a 4.2 percent systemwide sales rise) and Whataburger (11.1 percent) as well as fast-casual upstarts (BurgerFi was the third-fastest grower on the Top 500 list, with a systemwide sales gain of 69.3 percent, and The Habit was 14th, with a 36 percent jump).

Limited-service chains specializing in chicken registered collective growth in systemwide sales of 9 percent, led by PDQ (60.6 percent, the fifth-largest sales jump) and its direct competitor, Raising Cane’s (26.4 percent). Chick-fil-A, one of the older brands in the coop, posted an 8.8 percent sales gain, while KFC eked out a 1.8 percent rise.

Family dining is a mixed plate

Once the flat-lining segment in any sales ranking, family restaurants showed mixed results in 2015. IHOP, the segment leader, pushed systemwide sales to $3.3 billion, an 8.1 percent increase on a much smaller rise in store openings, while onetime sector darling Golden Corral posted flat sales from a declining number of stores. Denny’s and Cracker Barrel were fair-to-middlin’, with chainwide sales gains of 4.1 and 3.5 percent, respectively.

To purchase or learn more about this and other industry reports from Technomic, visit Technomic.com.