Continue to Site >>>
Edit
Removing the barriers to food recovery is one proposed solution. /Photography courtesy of Shutterstock.

President Joe Biden on Wednesday called for an end to hunger in America by 2030 and a reduction in diet-related illness during the first White House Conference on Hunger, Nutrition and Health in more than 50 years.

The day-long conference was designed to be a launching pad for the implementation of a national strategy to address food issues, touching on far-reaching topics ranging from federal assistance programs and school lunches, to the potential reducing barriers to food recovery.

But the conference was also designed to be a call to action, an attempt to galvanize the disparate government agencies, nonprofit and community-based organizations, along with the food industry, to help the millions who go hungry, as well those who suffer from heart disease, obesity and diabetes—health issues that disproportionately impact communities of color, seniors, rural Americans, the disabled, LGBTQ+ people, military families and veterans, the White House said.

In 2020, 1 in 10 households, or more than 38 million Americans, were food insecure, the White House said. At the same time, 600,000 people died of heart disease, 1 in 10 Americans has diabetes and 4 in 10 are obese—illnesses related to poor diet. And the problem of being able to afford healthful food is only expected to get worse with rising inflation and a potential recession on the horizon.

The question of the day: What can be done about it?

Dee Adimora, a manager and soon-to-be-franchisee of Everytable, an omnichannel foodservice business based in Los Angeles, had arguably the best answer:

Adimora, who grew up in the Los Angeles neighborhood of Compton, said she spent years working in fast food, eating as many as half her meals at work. As a result, she said she developed health challenges that now she is learning to address—and help others with—at Everytable. 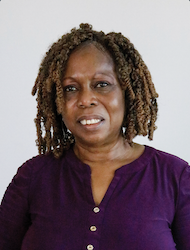 Dee Adimora, a manager and soon-to-be-franchisee of Everytable, spoke on a panel at the conference. /Photo courtesy of Everytable.

Founded in 2016, Everytable has about 40 locations in Los Angeles and New York City serving healthful grab-and-go meals for dine-in and takeout, made in a commissary kitchen, with prices that vary by neighborhood.

The chain also offers a meal subscription service and delivery, including Medically Tailored meals developed with dietitians to serve those with specific health needs, she noted. Everytable also relaunched a Pay-It-Forward program that allows guests to donate meals to organizations that feed the hungry.

But Adimora was one of few from the restaurant industry on stage during the White House event, though famed chef and restaurateur José Andrés was a keynote speaker.

Andrés called food “a national security priority,” saying a holistic approach is needed at the federal level to change the way our food systems work.

Andrés founded the multiconcept ThinkFoodGroup in Washington, D.C., as well as the nonprofit World Central Kitchen, which mobilizes volunteers to feed people in the wake of disasters.

He called for solutions that activate local communities “because locals know best.”

He also argued for diversity of food systems to better survive climate change, for example, and he called for the creation of “food improvement districts” to combat food deserts and build networks of healthy food sources in underserved neighborhoods.

“I ask you all to see hunger and poor nutrition not just as a problem to solve, but an opportunity for America to seize,” Andrés said. “The future of our nation depends on how we feed ourselves today and tomorrow.”

“This is something we should be rallying the whole country to work on together,” he said.

Biden said more than 100 organizations have responded to the call for action by committing about $8 billion, including public and private investments.

At least $2.5 billion will be invested in startup companies that pioneer new solutions for hunger and food insecurity, the White House said. And more than $4 billion will be dedicated to philanthropic efforts to improve access to health food, promote more healthful choices and increase physical activity.

Among them were commitments made by restaurants and their partners:

The national nonprofit Rethink Food, for example, pledged to rescue at least 2 million pounds of excess food from restaurants over the next five years to divert to food-insecure communities. That would be quadruple the organization’s current annual rate.

Rethink Food also plans to invest more than $10 million to support the capacity of local restaurants that are minority- or women-owned.

Celebrity chef Andrew Zimmern has joined with the Environmental Working Group, the James Beard Foundation, the Plant Based Foods Association and the Independent Restaurant Coalition to encourage chefs, restaurant owners and operators to offer at least one plant-based or vegetarian option on their dinner menus. The Environmental Working Group will track and report on progress on a quarterly basis.

The National Restaurant Association said it will expand the voluntary Kids Live Well program to 45,000 more restaurants, as well as create educational resources for restaurants to support healthier food options.

The program focuses on helping restaurants offer more healthful kids' meal options that meet certain guidelines on sugar, sodium, fats and calories, as well as a requirement that kids' meals be served with water, milk or juice instead of soda.

DoorDash said it will combat hunger in 18 cities by providing $1 million in DoorDash Community Credits so community-based organizations can provide free food delivery.

And Everytable said it will invest $100 million over the next three years to help low-income entrepreneurs become store owners in low-food-access areas.

Former President Richard Nixon was the first to host a White House conference on hunger in 1969, an event that is credited with the development of lasting public policy measures, such as the Supplemental Nutrition Assistance Program, or SNAP, and free school meals.

Sen. Cory Booker (D-N.J.) during the conference said the mission is clear: America can’t just lead the world in space exploration or strength of the military.

“America is going to be the best place on the planet to raise healthy children,” he said.