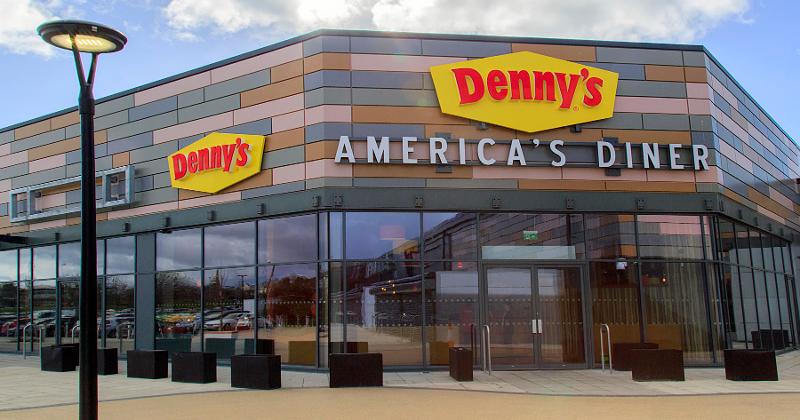 Distribution drivers and other vendors aren’t allowed into one of the 521 reopened Denny’s restaurants until an employee takes their temperature. While the contactless thermometer is aimed at their head, they can watch the store’s dedicated sanitation expert fulfill the duties of that newly created job.  The individual wears a vest or armband while scrubbing after every dine-in customer eats.

If the visitors opt to stay for lunch, they’ll be able to download a menu, which has been expanded from the narrowed choices offered while stores were limited to takeout and delivery. They’ll be served by someone in a mask and gloves who’s required to sanitize their hands every 20 minutes.

After 30 conference calls with operators in the field, Denny’s says it has an operations strategy in place for the next phase of the COVID-19 crisis. It’s the statistical realities that are vexing the family dining powerhouse.

A Denny’s restaurant generates 36% of its sales between late Friday night and lunchtime on Sunday, according to CFO Robert Verostek. With most states capping reopened dining rooms at 50% of their former on-premise capacities, the resumption of on-premise service “would likely impact Denny's restaurants for only a few hours during weekends,” Verostek told financial analysts.

Dining room business in the 21 states where Denny’s stores have reopened is still down by an average of 68% from a year-ago. In contrast, delivery and takeout sales are up 105%.

Figures released by the home of the Grand Slam are the latest indication that the dine-in capacity caps set by many states as a condition of reopening dining rooms may be insufficient for restaurateurs looking to cover their operating costs.

In a survey of New York City operators, 61% said they could not make a go of dine-in service unless at least 70% of their seating could be put back in use. Only one in four participants told canvassers for the New York Hospitality Alliance that they could turn an operating profit at 50% of capacity.

Operators have discovered that resuming dine-in service can carry a significant cost because of the need to buy masks, hand sanitizer and greater volumes of surface disinfectants.

Some full-service places are also seeing substantial upswings in labor costs because servers are making less in tips while fewer tables are in use. In states that have a tip credit, employers are having to supplement what they formerly paid the waitstaff to bring their wages up to the state or federal minimum.

For Denny’s, a unit offering limited dine-in service needs to generate daily sales of $2,000 to $2,500 to cover food, labor and other non-fixed costs, according to Verostek. The threshold for places offering only takeout and delivery is $1,500. The Denny’s restaurants offering only off-premise business are averaging more than that figure, Verostek added.

“I think to some degree the franchisees will be looking at sort of reloading, restaffing, reopening inventory and then waiting for a 50% [capacity] or better because of the gear up cost,” Denny’s CEO John Miller told financial analysts.

Employees re-offered their jobs might also have some hesitation, Miller continued. “Employees need a certain number of hours a week to make it coming off on employment,” he explained. “ Building cook hours in stages and then [adding] another cook and then building hours in stages, and then another server—all those things play a role.”

Stilll, Verostek said, the 521 Denny’s restaurants that have partially reopened their dining rooms are averaging a 50% decline in same-store sales, compared with negative comps of 68% for those offering only takeout and delivery.

California and other states that recently approved the reopening of dining rooms have not set a cap on dine-in capacities, specifying instead that tables be kept at least six feet apart.

About 272 domestic branches of the 1,695-unit chain have closed rather than offer any form of service during the pandemic. Denny’s officials revealed to investor that 82% of franchised stores have received relief loans from the Paycheck Protection Program, with another 7% approved and awaiting their checks.