There may not be a place to sit in the KFC of the future.

The Louisville, Ky.-based chicken chain on Wednesday revealed its newest prototype, a restaurant that will accentuate the skyrocketing demand for takeout service.

The prototype, which some of the company’s franchisees will begin opening next year, integrates technology and takeout capabilities throughout its restaurants. It could feature a double drive-thru, parking for delivery drivers and curbside orders, cubby systems for digital orders and self-service kiosks. And fewer—if any—seats.

“We have a very intentional focus on how we make it an easy off-premise experience,” Brian Cahoe, KFC’s U.S. chief development officer, said in an interview Restaurant Business. “It provides options and flexibility for the operator and the consumer.”

Quick-service chains, including KFC sister chain Taco Bell, have been introducing new prototypes aimed at taking advantage of a future where digital, drive-thru and delivery take up a larger percentage of orders. Those efforts intensified during the pandemic, which appears to have shifted much of the industry in that direction.

KFC has been working on its “Next Generation Prototype” for more than a year. Cahoe said franchisees in three different markets plan to open variations of the prototype next year, when the chicken chain expects to ramp-up its development.

Much of the chain’s work focuses on easing demand on the drive-thru. KFC’s U.S. drive-thru sales grew 60% in the third quarter compared to a year ago, and 80% of the chain’s 4,000 U.S. restaurants now have delivery.

That demand is expected to remain heavier coming out of the pandemic than it was going into it. “The drive-thru has been the hero through COVID-19 for us and many QSRs in the space,” Cahoe said.

At the same time, he said, it can be a problem for customers. “That drive-thru line is the order point and the pickup point,” Cahoe said. “How do we take the friction out of that if you’re a delivery driver or an online order customer? If your order is already in place and you’ve paid, you want to get it and go.”

KFC’s new prototype includes a digital cubby system for mobile and delivery orders. Delivery drivers will also get their own parking spots, and there will be spots for curbside service. The inside may also have self-service kiosks.

The company is also considering a second drive-thru lane, potentially for mobile or delivery orders.

That could also include a conveyor system, Cahoe said—making KFC the latest, after Burger King and McDonald’s, to acknowledge they’re working out on delivering food to the second or third drive-thru lanes to eliminate the merge at traditional double drive-thrus.

All of these options take up space, much of which will likely come from the dining room. Some of the options KFC is working on won’t have any indoor seating at all—again joining a growing number of concepts considering such seatless options.

“I don’t think dine-in has gone away forever in the U.S.,” Cahoe said. “But we’re going to continue to evolve and learn where the customer is. We see drive-thru-delivery-and-carryout-only restaurants as a great way to reduce the footprint of the building and the land needed and produce the same type of results as a freestanding with a drive-thru, but with lower investment and real estate costs.” 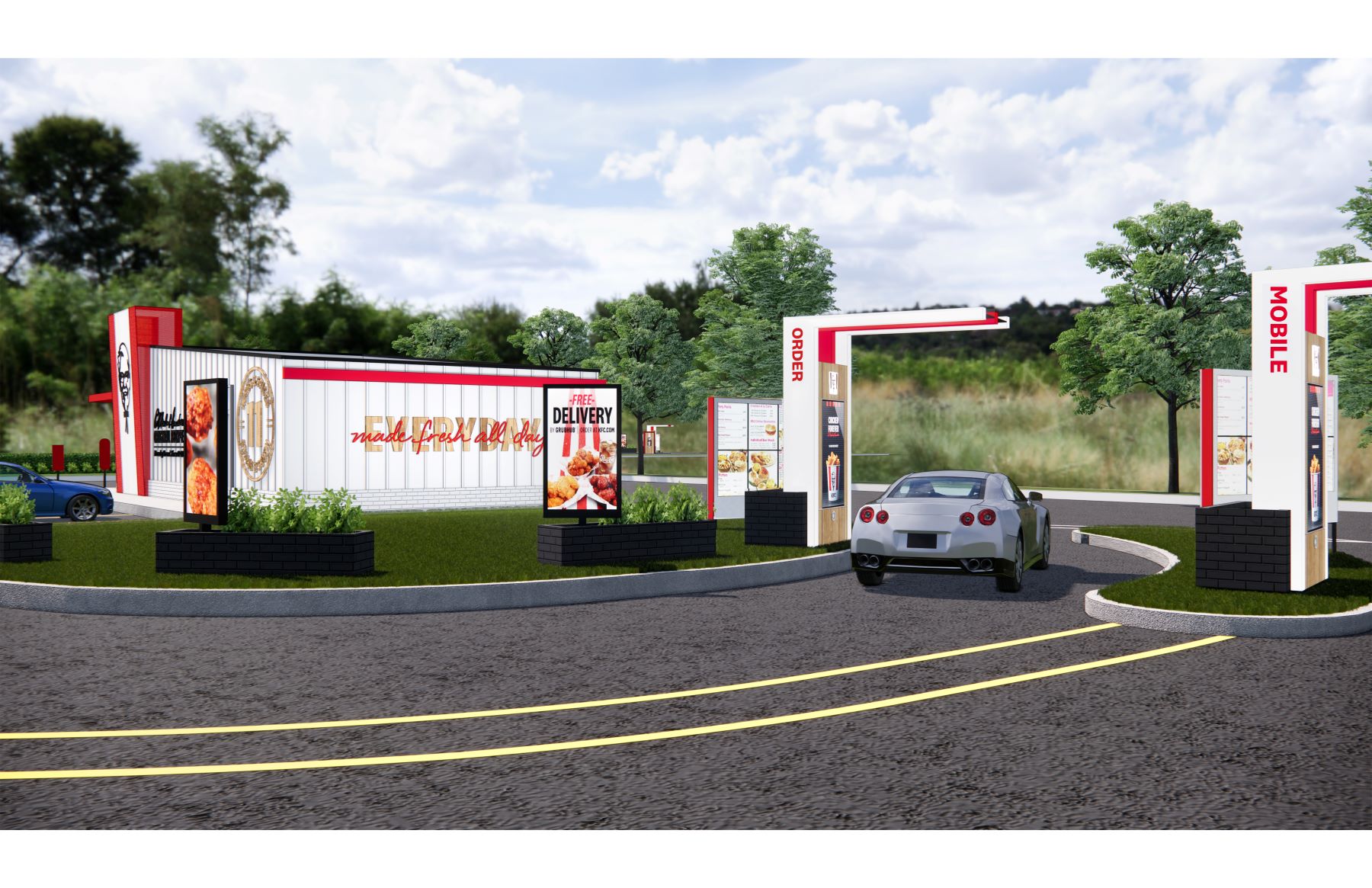 All of these strategies could at least in theory reduce another type of pain point for local restaurants: Local government regulators, many of whom may not want more drive-thrus in their communities, even if they don’t outright ban them, as Minneapolis has.

Cahoe noted that the growing number of options for picking up food could reduce some of the concerns associated with drive-thrus—notably the long lines of idling vehicles. By giving customers another convenient option, the company hopes to reduce the lines and ease regulator concerns.

“That’s part of the evolving landscape in the U.S.,” Cahoe said. “We’re trying to appease concerns and reduce the drive-thru stack. That’s what the convenience is of skip-the-line parking, running in, grabbing it and leaving. You don’t have that drive-thru stack.”