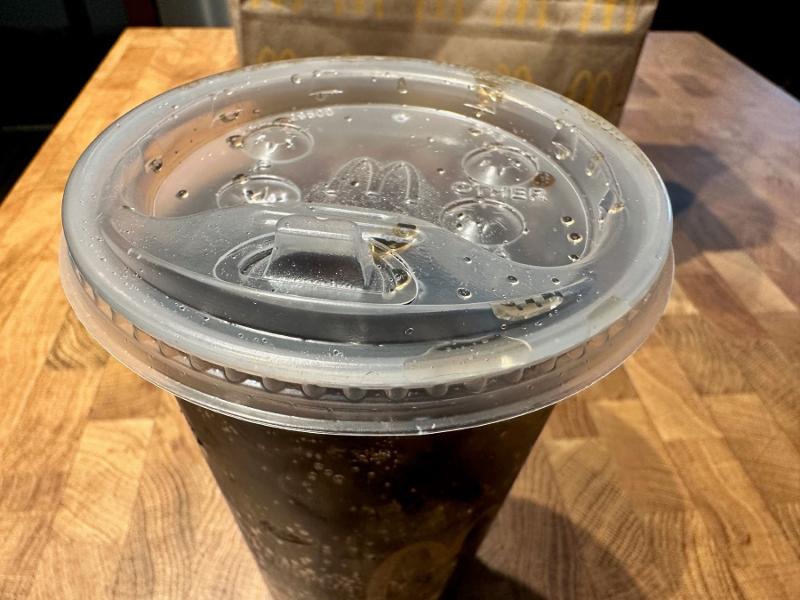 McDonald's new lid features a pullback tab that provides an opening for drinking without the use of a straw. / Photo by Jonathan Maze

The days of the McDonald’s straw may be numbered.

The Chicago-based burger giant is testing a strawless lid that enables consumers to drink their beverages without either spilling or using an additional plastic straw.

“McDonald’s is currently testing strawless lids for our cold beverages in select U.S. markets,” McDonald’s said in a statement to Restaurant Business. “These lids help optimize our packaging and eliminate the use of small plastics, just one example of the many solutions we’re reviewing as part of our ongoing global commitment to reduce waste across restaurants and advance recycling.”

The Minneapolis area is one of the markets where the lids are being tested. In some stores, workers are telling customers that they must request a straw to get one with their drink, though on our visit to a local restaurant on Wednesday we were given a straw without requesting one.

The lids come with a pullback tab that keeps the top closed for transport. When that tab is pulled, it exposes a half-moon opening for easily drinking the beverage.

For franchisees, the new lids lower franchisees’ paper costs and can reduce the number of items customers have to give out along with orders.

But it also comes as McDonald’s has been working to reduce the use of single-use plastics in its takeout containers. The company in 2018 joined forces with Starbucks and Closed Loop Partners to develop a recyclable or compostable cup. McDonald’s switched to paper straws in the U.K. in 2018, in part because of customer demand there.

But such moves also pose a risk for McDonald's, whose visibility can make the company a target, particularly in a politically divisive era. McDonald’s drew criticism in the U.K. from both sides of the political spectrum after its move to paper straws, both because they don’t work as well as the previous versions and because the paper straws are not recyclable.

Still, the company wants to reduce the use of single-use plastics and plastic straws are among the most frequently found plastic refuse in the ocean. Then again, according to Stanford University, straws represent less than 1% of the plastic found in the oceans and it fears that ditching plastic straws could give companies a “moral license” to avoid taking other steps to avoid plastics. There are an estimated 150 million metric tons of plastic in the ocean.

And indeed, at least one Twitter user critical of the move noted that the company is now using plastic cups, rather than paper, and likened the new lid to a “zippy cup.”