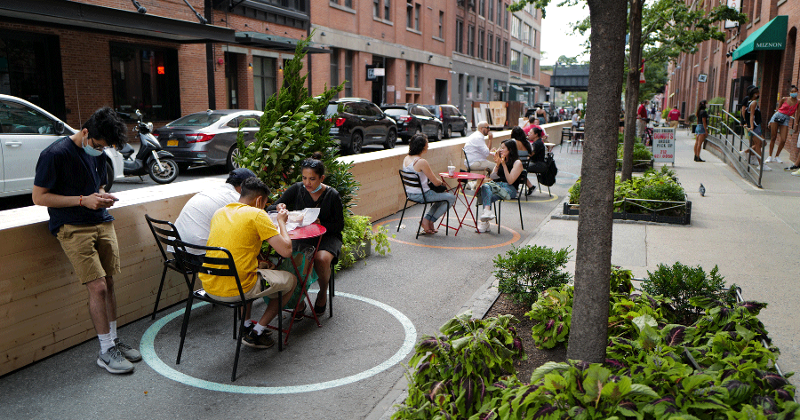 The move would plunge restaurants in one of the industry’s most vibrant markets back to where they were in March, when all service was limited to takeout and delivery to slow the spread of COVID-19.  Groups such as the New York City Hospitality Alliance (NYCHA) say the local industry has been decimated by the loss of dine-in service, and that outdoor dining has been what enabled many surviving places to stay afloat. They warn that thousands more of the city’s restaurants will be forced to shut permanently if their capacities are not increased.  They note that restaurants in every other region of the state have been allowed to resume using up to 50% of their indoor seating capacities, and that operators in the city have been just as diligent as their peers elsewhere in enforcing state-mandated safety measures.

During a press briefing, Cuomo repeated his frequent assertion that New York City poses a unique risk during the pandemic because of its population density. He also contended that restaurants and bars there have not been as zealous as operators in neighboring areas about enforcing mask requirements, discouraging the gathering of crowds and maintaining social distancing among their patrons. He has repeatedly railed against establishments in the city for allowing customers to congregate in large numbers outdoors as they socialize, linger over drinks and violate alcohol service rules.

“We have a much, much bigger problem in New York City today than any of the surrounding suburbs with a lack of compliance,” Cuomo said. Statewide, the liquor licenses of 150 establishments have been revoked because the permit holder failed to enforce state-required safety measures. The governor did not say how many of those places were located within the five boroughs of New York City.

As the weather gets colder, Cuomo said, he may suspend outdoor service to counter a possible flare-up of new coronavirus infections, the second wave expected by many health experts.

The NYCHA declined to comment. Hours before Cuomo spoke, the group had held a virtual press event to demand that Cuomo and Mayor Bill De Blasio set a date and a plan for reopening restaurant dining rooms in Manhattan, Brooklyn, Queens, The Bronx and Staten Island. If they don’t, “all legal options are on the table,” said Robert Bookman, the Alliance’s legal counsel.

Cuomo and De Blasio had said back in June that they would permit a resumption of dine-in service on July 6, but then reversed themselves a few days beforehand because of a surge in new COVID-19 cases elsewhere in the country. They feared that visitors from out of state would bring the virus with them, and that New York’s famed restaurants would serve as infection incubators. They also imposed a requirement that visitors from states self-quarantine for 14 days before being allowed to move freely through the state and city.

New York and its namesake city were the epicenter of the pandemic during its early days, with infection and mortality rates several times higher than what was seen in most other areas. After emergency safety measures were imposed by Cuomo and De Blasio, the curves were flattened. Today, key metrics indicate that the jurisdictions have a tighter control on new infections than does any other highly populated areas of the country.