Hoping to speed the restaurant development process, the parent of Quiznos and Taco Del Mar on Wednesday unveiled a tiny prefabricated restaurant model with the option of no dine-in.

Dubbed “The Qube” for Quiznos and “Baja Shack” for Taco Del Mar, the 650-square-foot restaurants are designed with both drive-thru and walk-up windows. The units are built off-site and shipped fully equipped, pre-wired, pre-plumbed and inspected — with the goal of dramatically reducing the development timeline, the company said.

Since the pandemic, restaurant growth has been hampered by supply chain delays and construction slowdowns, and many chains are looking to growth with smaller-format stores, particularly with drive-thru access.

Real estate developer BCubed President Jeff Konczak is credited with developing the new Quiznos/Taco Del Mar model. He also heads Alpena Marc LLC, which has signed a two-unit development deal to operate a Qube and a Baja Shack in Alpena, Mich., in the coming months, the company said. 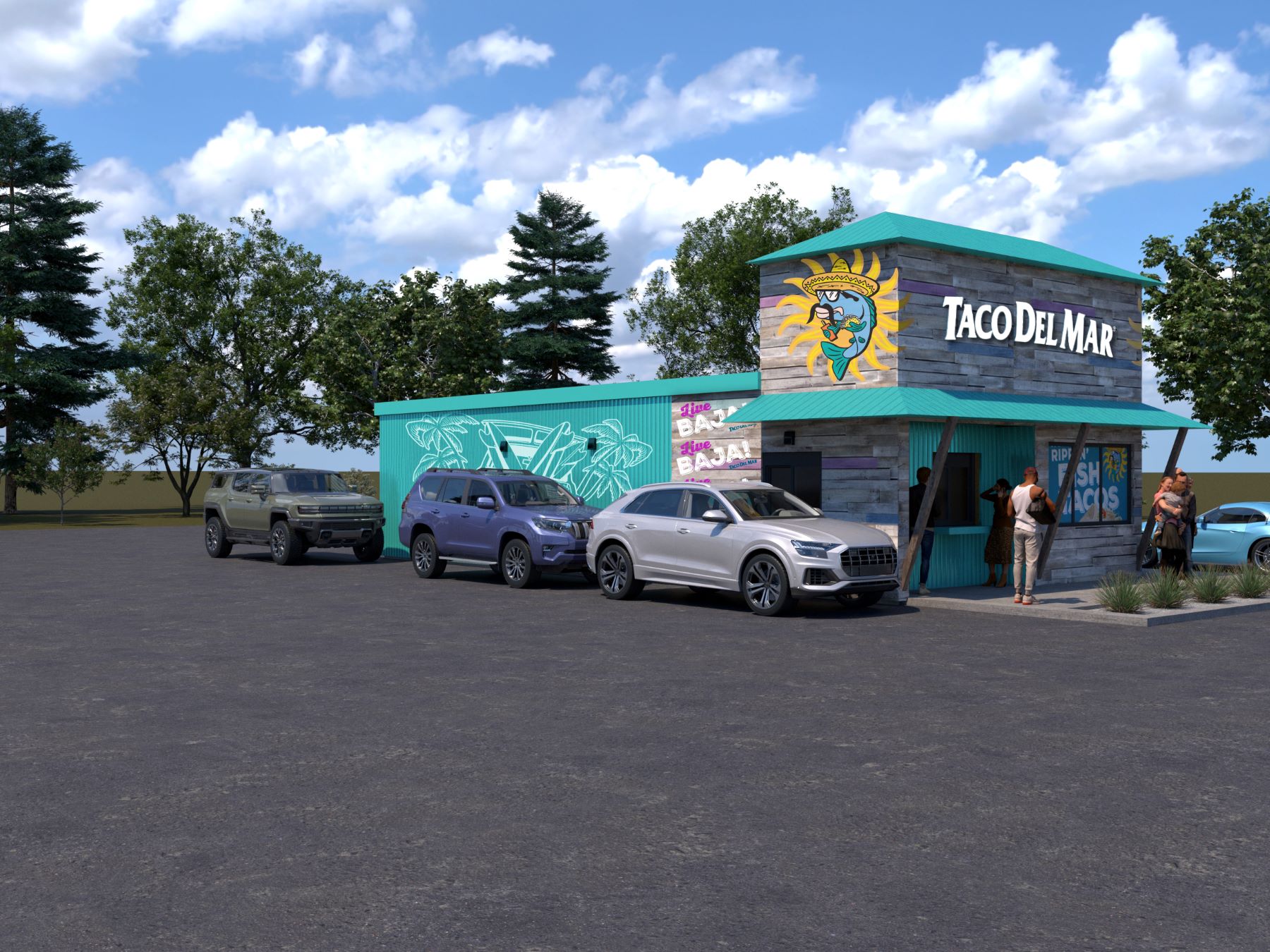 A rendering for the "Baja Shack" for Taco Del Mar. / Image courtesy of Rego Restaurant Group.

Konczak first pitched the idea to Biggby Coffee, which opened its first “plug-and-play” unit in 2018 and is scheduled to open its 40th this fall.

But the need for expedited restaurant development is giving the idea new life. Though inspections and permitting are still necessary for prefab locations, the company said most inspections occur at the manufacturing site, which helps eliminate reconstruction efforts once the unit is in place, Rego contends.

For Quiznos, the move comes amid an ongoing effort to rekindle franchise growth for the sandwich chain, which in 2021 had dwindled to 202 domestic units, a more than 90% decline from 2,349 in 2011, according to sister company Technomic data.

The rebranding began last year, when Rego rolled out a new store design and remodel package for Quiznos franchisees—including a drive-thru feature, as well as kitchens equipped with flat-top grills and fryers. The effort was designed to help attract guests for both lunch and later dayparts and build on the brand’s digital business.

High Bluff in 2021 also acquired the Church’s Chicken quick-service chain, with more than 1,500 restaurants worldwide, though it is not operated under the Rego platform.

Giving franchisees the option of an off-premise-only location is new for Quiznos and Taco Del Mar, though both brands have experimented with delivery-only virtual restaurants in some markets.

When asked about cost comparisons between the prefab units and traditional locations, Quiznos CEO Tim Casey said the savings opportunities are “multifaceted and include reduced construction and site preparation costs, as well as ongoing operating efficiencies.”

Casey in a press release described BCubed as a “compete disruptor,” like Quiznos when it first started in 1981, shaking up the sandwich world with toasted subs.

“It was doing things that no other brand was doing and we’re now returning to those roots as the most innovative franchise, by reinventing the brand and making Quiznos an outstanding investment opportunity for entrepreneurs who are seeking profitability and growth,” he said in a statement.

“We have every reason to believe that Quiznos and Taco Del Mar will be as ubiquitous as ever once again,” Casey added in the statement. “How fast we achieve that depends on franchisee enthusiasm, which to date has been resounding.”