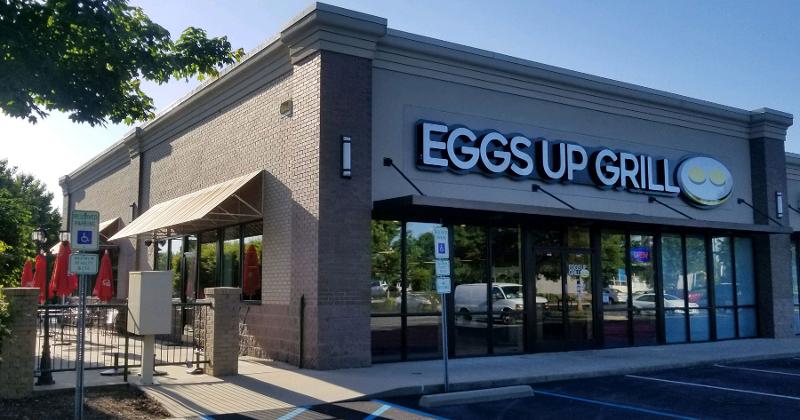 Photo courtesy of Eggs Up Grill

Franchisees of 40-unit breakfast and lunch chain Eggs Up Grill will be slowly reopening their doors in the coming weeks. About 18 are currently open, and five more will start serving customers again as they receive federal stimulus loans.

The reopenings have given the South Carolina-based chain practice as it prepares to open more locations and dining rooms while states gradually end weekslong quarantines and move into the next phase of the response to COVID-19.

So far, CEO Ricky Richardson said, the efforts have gone well. But he admits he’s concerned about something else: closing them again.

Restaurants around the country are preparing to reopen their doors or open their dining areas to customers again, beginning Monday in Georgia.

While that is giving many operators hope for the end of the economic shutdown that has threatened their businesses like nothing else in decades, it is also a process loaded with confusion, complexities and potential landmines.

Constantly changing state and federal regulations, differences in guidance from one market to the next, various cleaning and sanitizing requirements, and labor issues all present unique challenges almost no operator has gone through. There are no playbooks for recovering from a pandemic.

That’s on top of the everyday business challenges, such as how soon customers will return to restaurants and how they’ll use eateries once the economy normalizes, not to mention the prospect of a long economic downturn.

“It’s a challenge because it’s uncharted territory,” said Charlie Morgan, an Atlanta-based attorney with law firm Alston & Bird. “There’s not a single standard out there about what you’re supposed to do. There’s sort of a patchwork of limitations on what you can’t do right now. There is very little in the way of official guidance.”

“Prepare for criticism, because no matter what you do, it will come. But if you are doing what you believe in your heart of hearts is right, the negativity tends not to pierce as deeply.”

Guidance from Georgia does provide some indication of the restrictions other states will likely put on restaurants offering dine-in service: no more than 10 patrons per 500 square feet, no self-service drinks, no more than six people per table, no buffets, and servers must wear masks.

Still, for restaurant chains, the state-level requirements could present their own challenge, as executives have to pay close attention to states and local jurisdictions to determine their regulations before reopening.

“We’re taking our cue from state and local health authorities,” Joe Erlinger, president of McDonald’s USA, told reporters this week when asked about Georgia. “We know there are going to be things that are different in our lobbies. It’s a whole new round of changes.”

The National Restaurant Association has published its own guidance for restaurants looking to reopen.

And operators could look to some restaurants in Asia. Black Sheep Restaurants, an operator out of Hong Kong, published a “COVID-19 Playbook” with tips for restaurants preparing to reopen.

Its introduction included this warning from co-founder Syed Asim Hussain: “Prepare for criticism, because no matter what you do, it will come. But if you are doing what you believe in your heart of hearts is right, the negativity tends not to pierce as deeply.”

“Your plan has to be flexible, because it can be a difficult thing to readjust and recommunicate the rules.”

Preparing for the new normal

Restaurant operators have nonetheless spent weeks preparing for the day their dining rooms can open again.

Legendary Restaurant Brands, the owner of Bennigan’s, Bennigan’s On the Fly and Steak and Ale, is communicating heavily with franchisees, redesigning its lobbies to serve fewer customers and ramping up distribution and supply chain.

CEO Paul Mangiamele believes the most important strategy on reopening will be to show customers they’re safe. “It’s not just about putting chairs further apart,” he said. “It’s that we’re being safe, and that our guests see that we’re safe.”

BJ’s Restaurants CEO Greg Trojan on Friday said the company is “preparing to begin reopening restaurants once state and local officials allow us,” noting that the chain is developing social distancing and other protocols for the return of its dine-in areas.

“We believe our large restaurants and flexible seating layout will provide us a strong advantage to take care of our guests,” Trojan said.

“There are some blanks in the processes based on what the standards are going to be,” he said, referring to state and local regulations. “There is going to be some version of social distancing in every single community.”

Uno Restaurants, has ordered that digital thermometers be used to take employees’ temperatures before every shift, and it has masks and gloves for workers, too. It is also considering whether to use single-use menus. “We’re getting ready for what is the new guest experience,” CEO Jim Ilaria said.

The company is also trimming its menu. Its takeout menu is about half of its normal size. Its reopening menu will be larger, but not as big as usual. It won’t go back to a full menu until it gets 50% dine-in service, and even then, “it’s going to be smaller than our current menu,” Ilaria said.

He also believes that the industry will be able to easily adapt to whatever the new reality is, much like it has adapted to changes from one month to the next. The flexibility will come in handy. “We have to be proactive and nimble,” Ilaria said. “The whole situation is very fluid. It’s changing rapidly.”

Morgan of Alston & Bird suggests any restaurant include flexibility in its reopening strategy because there are so many uncertainties. “Your plan has to be flexible,” he said, “because it can be a difficult thing to readjust and recommunicate the rules.”

“What are we coming back to? Will we be in a deep recession? Those are the knock-on effects we haven’t had time to talk about.”

But what will restaurants open to?

The biggest question for many operators is what the environment will look like once dining rooms reopen. “We do not expect our dine-in to go back to 100% of what it was,” Ilaria said.

What kind of business restaurants come back to is an important question, because it guides a lot of decisions, from staffing to supplies.

Consider the challenges faced by many restaurants over the past couple of weeks as consumers armed with stimulus checks opted to order more takeout, generating a bump of several percentage points in many restaurants’ sales.

Some restaurants that had readjusted their operations based on a fraction of their earlier sales were suddenly overwhelmed. Some ran out of supply as customers lined up in drive-thrus and ordered from delivery apps.

Many experts believe there will be a surge in customers almost immediately. “I think there’s going to be pent-up demand, particularly among millennials who don’t cook and like to eat out four nights or more a week,” Stone said.

Others agree. “People really want to go back out to eat,” said Mark Wasilefsky, head of the Restaurant Franchise Finance Group at TD Bank. “We’re social creatures. We like to go out to eat.”

Kevin Burke, managing director with Trinity Capital, doesn’t expect any surge to last, however. “When we have the bulk of the country open, we’re not going to see a sudden resurgence in traffic,” he said. “Maybe for a few days as a lot of folks relieve themselves of cabin fever. But I think we’re going to find that certain demographic and subdemographic groups have not returned in force.”

Lessons from other countries provide some indication of what to expect at restaurants. For Starbucks, where same-store sales in China were down 90% in mid-February, sales improved steadily week after week. By late March, they were down 42%—an improvement, but still down.

Yum China, which operates mostly KFC and Pizza Hut locations in the country, said in late March that traffic was “recovering slowly” but “remains well below pre-outbreak levels.”

While there might be some pent-up demand, and Americans with stimulus dollars are clearly spending some of them at restaurants, there is also a continued fear of a virus that has killed about 50,000 Americans. As long as that virus is out there, a certain percentage of customers will be reticent to return to normal.

“Even if there’s a cure, we’ll still do this,” Ilaria said. “It’s only when there’s a vaccine and we have 100% compliance that we’ll be able to relax some of these” operational changes.

Another question is the economy. While the stimulus dollars are helping, they won’t last forever, and well over 20 million Americans lost their jobs recently. Not all of them will return to work.

“What are we coming back to?” Ilaria said. “Will we be in a deep recession? Those are the knock-on effects we haven’t had time to talk about.”

What if restaurants have to close again?

And then there’s this: Restaurants might have to close again.

For one thing, reopening could be premature—President Trump himself has questioned the timing of Georgia’s reopening, for instance. Reopening only to see a quick return of the virus that forces further closures would be a problem.

There’s also the fact that many experts expect the virus to make a comeback this fall. Many believe that restaurants should have a plan to address rolling shutdowns in various markets and states if the virus starts spreading again.

That’s also expensive. Every operator we spoke with said closing again after reopening would be a costly venture. “It would be very difficult and costly to reopen only to close again,” Mangiamele said.

But operators are an optimistic bunch. The rapid-fire closings that took place in March gave the industry a giant training exercise. Many believe they’ll be better prepared if closings happen again.

“If there’s any silver lining, it’s that if it does occur, we’ll know quickly how to respond to those,” Richardson of Eggs Up Grill said. “There will be less scrambling because we’ll have those processes.”

Indeed, Ilaria said Florida alone provided a lesson to Uno about a fast closing, making his company better prepared now than it was last month.

“When Florida closed, they gave us only five hours to close,” Ilaria said. “They sent a press release at 3 p.m. We had to close at 8 p.m. We had to turn around trucks that were going to deliver full orders because we wouldn’t have a full menu. It was a baptism of fire.”

Mostly, operators are keeping faith that the reopening will start getting them back to normal. And they’re confident in their ability to get through this period. For a business like Legendary Restaurant Company, whose concepts survived a near-death experience more than a decade ago, the current shutdown seems a cake walk.

“If we can survive a Chapter 7 bankruptcy, we can survive this,” Mangiamele said. “It’s just another bump in the road. We’ll come out the other side stronger.”