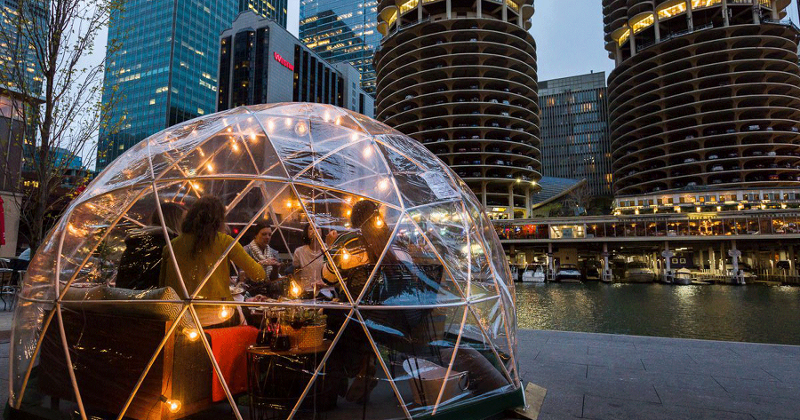 With the spread of coronavirus slowing in many areas, states and local jurisdictions are easing the service restrictions imposed on restaurants around 2020’s year-end holidays, though not as fast as many in the industry would like.

Officials of California, the largest state restaurant market, have informed the California Restaurant Association (CRA) that Gov. Gavin Newsom will lift his stay-at-home directive sometime Monday, the trade group said in a letter to members. That move will enable restaurants to immediately resume outdoor dining service statewide and indoor areas that meet the governor’s safety thresholds.

“We will send you further information as soon as it’s available,” the CRA said in yesterday’s letter to members. “For now, we thought you’d like to know this good news.”

Restaurants in Chicago were permitted starting Saturday to resume indoor service at 25% of their seating capacities, up to a maximum of 25 people. Bars that serve food can also seat patrons indoors again. No more than four people can be seated at a table.

Restaurants in New York City are pushing their governor to follow suit. After 90 restaurants in the Buffalo area successfully sued to reopen despite Gov. Andrew Cuomo’s ban on indoor dining, the state chief executive begrudgingly okayed a resumption of interior table service in areas with moderate rates of increase in new COVID-19 cases.

The Big Apple was not one of those jurisdictions, even though “our infection and hospitalization rates are lower than most counties in the state where indoor dining is permitted at 50% occupancy,” Andrew Rigie, executive director of the New York City Hospitality Alliance, said in a statement.

Ohio Gov. Mike DeWine frustrated restaurants in his state by announcing on Friday that he would extend a 10 p.m. curfew on restaurants for a week. The service limit was scheduled to expire on Saturday. But the Republican committed to easing the forced shutdown until 11 p.m. starting Jan. 30.

Massachusetts’ 9:30 p.m. curfew was lifted by Gov. Charlie Baker as of today. But the Republican kept in place the state’s 25% capacity cap, saying he’ll reconsider an expansion to 50% as of Feb. 8.

Michigan plans to impose a 10 p.m. curfew on restaurant service, a companion action to last week’s decision to permit indoor dining at 25% of seating capacities, up to a maximum of 100 interior customers.

Baltimore lifted its suspension on all on-site dining as of Friday. Restaurants can now use up to 50% of their outdoor seating and 25% of indoor capacities. However, customers can remain at their tables for no more than one hour, and they must sign in and out to verify they’re within that time limit.

Indoor dining was also reinstated in the District of Columbia, where interior seating was suspended in part because of safety concerns stemming from last week’s inauguration of Joe Biden as the nation’s 46th president.

Restaurants in Philadelphia were allowed to reopen at 25% of their indoor capacities starting Jan. 16.  Elsewhere in the state, more than 100 restaurants have been closed by order of the State Department of Agriculture for failing to follow Gov. Tom Wolf’s safety protocols, including mandates that employees and guests wear face masks.

Statewide, restaurants have a 50% capacity cap on indoor dining unless more stringent local requirements are in place.