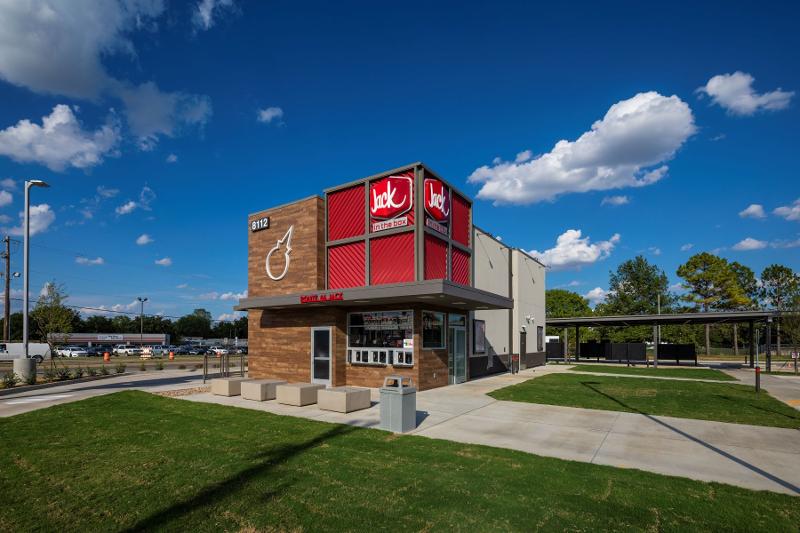 Jack in the Box hopes to convince franchisees to build new units, so it is jumping on the takeout-only bandwagon to get that done.

The San Diego-based burger chain on Wednesday said that it recently opened a location in Tulsa, Okla., that could provide operators with a more efficient expansion program in the coming years.

The location is 1,350-square feet. It features a double y-lane drive-thru, a walk-up window and a dedicated window for mobile and third-party delivery orders. The location also features a dual assembly kitchen.

The design also includes a “big red box” on the façade to pay homage to the company’s namesake. Exterior lighting turns purple to signify late-night hours.

Maybe most important: The location is cheaper. The company said the goal is to reduce buildout costs 18% to 23%. It also increases real estate flexibility, giving operators the ability to open new restaurants in locations that previously wouldn’t be available to the chain.

Jack in the Box says that the prototype is designed for free-standing locations. But it can be adapted to fit other areas, such as convenience stores, travel plazas and end-cap locations.

That’s key for the chain, which is eager to grow. Jack in the Box has 2,200 U.S. locations, most of which are operated by franchisees. Yet that is about the same number as the chain had a decade ago.

Most of the company’s locations are out West, in California, Washington and Oregon, along with Texas. But it has formed a franchise sales team and has deals with operators to build well over 200 more locations.

“We have had more site approvals in the past six quarters than the previous three years combined,” CEO Darin Harris told investors in August, according to a transcript on the financial services site Sentieo.

Here’s a look at the company’s new prototype: