Ex-offenders and the opportunity to learn new trade skills. | Photograph courtesy of NRAEF

Working in a restaurant is seen by many as an option of last resort, a route no one chooses if they dream big and yearn for a secure life.

Clearly, they’ve never been in jail.

It took Ernest Green just five days in a cell to realize almost anything was better than incarceration. “It was hell,” says the young Chicagoan. When MOD Pizza provided an alternative in the form of an entry-level job, he took it.

He discovered that the job was more than a get-out-of-jail ticket. To his own admitted surprise, it proved to be a lifeline, a second chance to get his life right. Now he talks about possibly having his own restaurant someday, or even getting involved in politics.

“I was this close to dying,” he says of the life his new opportunity replaced. “I was this close to getting arrested and having to do 10 years.” (Green can’t reveal what led to his stint in jail and negotiated release because the case is still open.)

In the process, he’s proven the viability of a new program that aims to address two seemingly intractable problems.

People who’ve run afoul of the law—the preferred term for them is the judicial-involved—often have no other option than to stick with crime because employers refuse to hire them for legitimate work. Yet restaurants are cutting shifts because they can’t find anyone to staff them.

The HOPES program promises relief on both fronts. The population of incarcerated adults in the United States totals 5.5 million, according to the statistics website Statista.com. Other data indicates between 30,000 and 40,000 are released every year. The restaurant industry needs about a million more workers. The initiative was conceived as a bridge between those two statistical realities.

The acronym stands for Hospitality Opportunities for People (Re)Entering Society.

The program is being piloted by the National Restaurant Association Educational Foundation, or NRAEF, and state restaurant associations under two grants from the U.S. Department of Labor.

Under the initiative, the NRAEF relies on a variety of community-based organizations and local departments of corrections to identify young justice-involved individuals who might embrace a restaurant job as an alternative to getting by through crime. About 750 people are currently involved.

“With HOPES, what you’re doing is providing that life-altering second chance to an individual who meets that opportunity,” says Rob Gifford, president of the program’s developer and administrator, the National Restaurant Association Educational Foundation. “The wonderful thing about this industry is it provides those second and third chances.”

It’s a given they’ll be unlikely to match the money from their prior endeavors. “I used to make in a day what I’m making now in two weeks,” Green says. But “it’s better than being in jail or getting killed.”

It’s also about doors opening. Ronnie Pettis, a participant from Chicago with a penchant for cooking, ultimately wants to create an app that helps parents and children spend time preparing meals together. He knows he’s unlikely to find the route in the neighborhood where he was shot and nearly killed.

The community-based organizations also provide what the NRAEF terms wraparound services. Someone exiting jail needs a job, but they also need housing, a way to get to the job, clothing to wear to the job, the upfront money to pay for those necessities, a bank account to deposit their paycheck, and other rudiments of a modern life.

They can’t even begin to assemble those fundamental forms of support if they don’t have identification. The community groups help the participants clear such high hurdles as getting copies of their birth certificates, a Social Security card and a license or other state ID.

MOD Pizza has been hiring ex-offenders since it opened the chain’s second unit. The breakthrough of HOPES is that it provides those additional elements for helping judicial-involved individuals restart their lives.

“The issues around creating that stability, if that’s not your expertise, are considerable,” says chain co-founder Ally Svenson. “The key is to be involved with organizations whose specialty is being case managers. We are not case managers.”

“It’s crucial,” MOD Pizza VP of Social Impact Robin Hamm says of the wraparound support HOPES provides. “One of the things that we observed and helped us make the decision to get involved is the continuation of case management along the way.”

“We can be part of that. We also have some of our own stability programs in place,” she says. But “we are seeking out organizations that will provide this resource of case management.”

Even then, the process might not be a cakewalk, employer and employee say. Hiring someone who’s been arrested or has done prison time can rouse plenty of misperceptions, apprehension and outright fears on the part of all the participants.

Ernest Green knew he’d be carrying a stigma when he started working at MOD in 2020.  In his first month on the job, Green worked 145 hours and was designated an all-star under MOD’s employee recognition program. He wanted coworkers to know he was there to work and be part of the team.

MOD is aware from speaking with other employers that many fear the youngsters will revert back to crime, especially with so much cash flowing through a typical restaurant.

Those worries discount how much value the justice-involved put on getting a second chance and being spared incarceration.

“We have definitely not felt or seen that we have a higher incidence of bad behaviors as a result of our hiring,” says MOD’s Svenson.

“I can’t begin to think about that,” says Lakisha Hunter, chef-owner of That Jerk Spot food trailer in Chicago. After employing three groups of HOPES participants, she can’t recall an instance of theft.

She certainly doesn’t see that worry as a reason to forego the benefits of having a full staff of highly motivated team members. “If it happens, it happens,” she says. Then she smiles and adds, “Then we have an opportunity to learn integrity.” 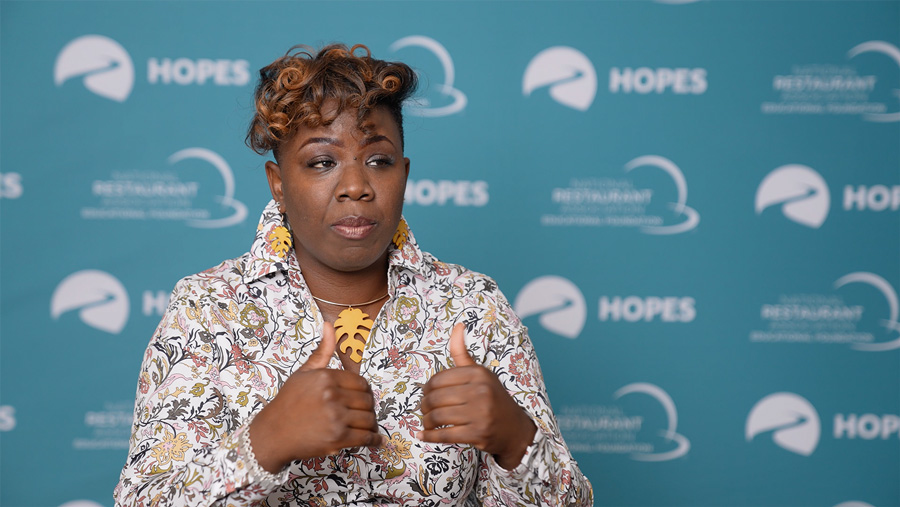 Employers have also voiced concerns they’ll teach the youngsters how to be good workers and then watch them leave because they’re now more employable, allowing others to enjoy the benefits of that hard work.

Indeed, Green left MOD as this story was being posted, with his new life choice not yet revealed. He had become a star of sorts, using a microphone for the first time at a presentation at the National Restaurant Association Show in May and leaving Chicago for the first time in October to address a group in Washington, D.C.

Still, MOD has found the justice involved to be more loyal than its workforce as a whole.

“This is not philanthropy,” says Hamm. “We have data that shows our MOD Squad members with justice involvement have higher retention, they have higher advancement. For the naysayers out there, they’re not going to find they train these people and then they leave.”

There’s also the fear that fellow employees or even guests might be apprehensive about interacting with acknowledged criminals.

“It’s not as if there’s a flag--they don’t come in with a scarlet letter,” says Hamm.

Besides, they are unlikely to be the only member of the staff who made a life-changing mistake in their youth.  “Everybody comes into MOD with a story,” Hamm observes.

Nervous about starting his new job, Green said he calmed down on Day One after learning his supervisor was on probation because of a crime.

Jerk Spot’s Hunter was arrested 27 times in her youth, though she was never incarcerated. She was also a gang leader.

HOPES is currently in operation within seven states: Virginia, Massachusetts, Illinois, Texas, Delaware, Michigan and Ohio.  Thirteen community-based groups are involved.  Employers are lined up through local correctional programs and the state affiliates of the National Restaurant Association.

The NRAEF’s Restaurant Ready training program, the educational foundation of HOPES, is available in 20 states.

“The only thing that limits our growth is funding,” says Gifford.

He suggests HOPES could become as big as ProStart, the NRAEF signature program that steers high school students toward foodservice careers. “it’s important to remember that ProStart started in two or three high schools in Illinois,” says Gifford. It’s now in all 50 states.

MOD intends to foster growth. Green may have left, but the pizza chain is sold on the program.

“It’s important to give Ernest all of the credit and all of the recognition for what he’s done,” says Hamm. But “we also have to be careful not to color Ernest as being unique.  There are a lot of Ernests out there.”

“Employment is just about to take off,” says Hamm.  “We’re looking forward to that.”