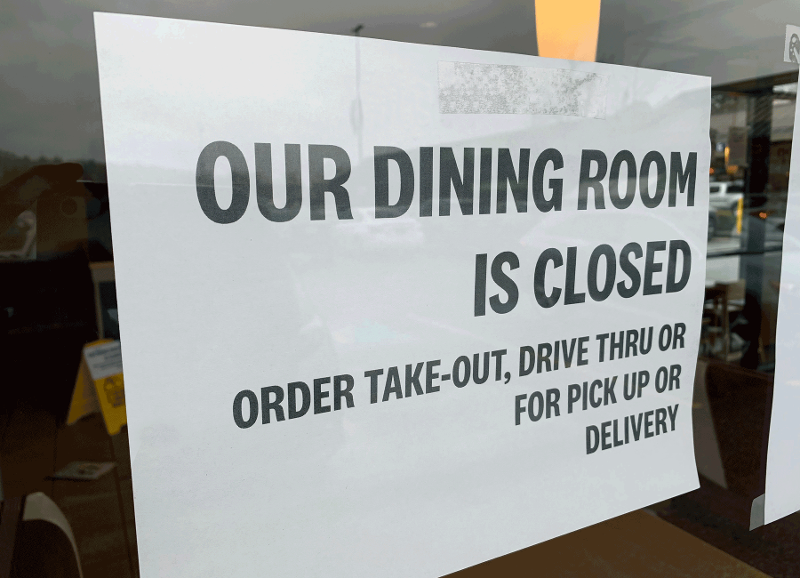 The fifth may well be Michigan, whose governor, Gretchen Whitmer, is scheduled to hold a rare Sunday press conference today at 6 p.m. EST. The Democrat has not yet revealed details, but the expectation is that she'll suspend at least indoor service at restaurants and bars.

Unlike New Mexico and Oregon, which both announced the re-closing of indoor seating areas at the end of last week, Washington will allow outdoor dining to continue, along with takeout and delivery.

Washington's bars will also be required to halt indoor service.

Washington Gov. Jay Inslee said his administration will strive to help affected businesses by creating a $50 million aid pool. But the Democrat said it is not feasible at this time for Washington to provide the $600-a-week supplemental unemployment payment that furloughed workers were eligible to receive earlier in the pandemic from the federal government. That additional payment expired during the summer, and Congressional leaders have not been able to agree on a new aid package, including any program that extends direct relief to small businesses such as restaurants.

More states are widely expected to suspend dine-in service a second time, or direct certain counties to close or limit indoor facilities, because of the steep recent climb in new COVID-19 cases.  New coronavirus infections totaled just under 160,000 nationwide on Saturday, or roughly eight times the rate that triggered the first nationwide lockdown in March and April. Infections this weekend represent an 80% increase over the average daily tally of the last two weeks.

Ohio Gov. Mike DeWine said he will indicate on Thursday if his state will also suspend dine-in restaurant service. The Republican has said he would impose a second lockdown if numbers for the Buckeye State don’t improve. He issued that warning when new daily infections were hovering around 6,000. The state set a new daily record of 8,071 on Friday and 7,853 on Sunday.

Inslee announced the re-closings within his state on Sunday, a day after new COVID cases hit a record of 2,286. “This spike puts us in as dangerous a position as we were in March,” Inslee said during a press conference. “And it means, unfortunately, the time has come to reinstate restrictions on activities.”

The governor was asked why he was targeting restaurants when many of those operations have maintained that dining-room service at worst poses a negligible danger of spreading coronavirus.

“Don’t tell me these things don’t work and there’s no transmission within restaurants,” Inslee responded. “They’re frustrated because they’re not the only places where transmission is taking place.” But, he acknowledged, “it is a difficult decision, believe me. They’ve been very creative, they’ve been very diligent in most circumstances, trying to keep their employees safe.”

Kathy Lofy, Washington’s state health officer, said restaurants pose a particular contact-tracing challenge. “Restaurants are the most common site of outbreaks here in our state,” she said. “The number of people involved in those outbreaks are very small, and usually involve staff.”

Identifying and isolating customers who might have been exposed would involve sifting through receipts and otherwise identifying what individuals were present when an infected employee is on duty, and then “we’d have to follow up with all the people who were at the restaurant.”

Shutting down indoor dining, she suggested, would spare that strain on the state’s containment efforts.

Inslee cited a number of reports and studies that indicate restaurants are a common point of coronavirus transfer. Much of that research has been faulted by the industry, including a recent Stanford University report that portrays restaurants and Starbucks-like cafes as “superspreaders” of the virus. Starbucks is based in Washington.