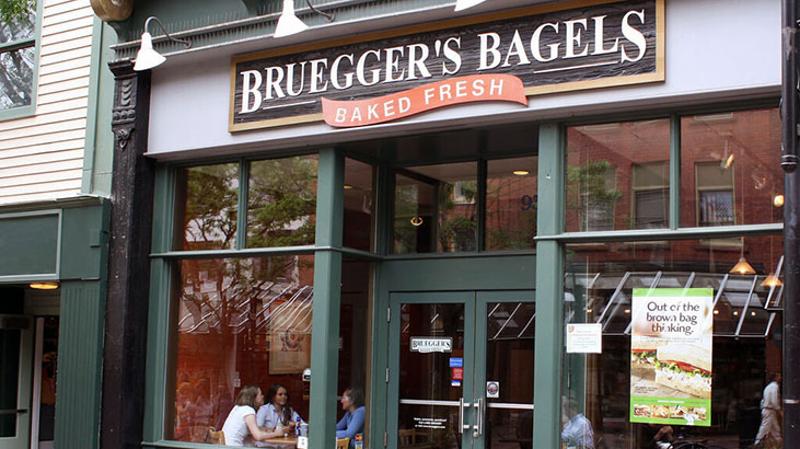 After closing on the $7.5 billion purchase of Panera Bread Co., Europe-based JAB Holdings is adding Bruegger’s Bagels to its extensive portfolio of bakery, coffee and breakfast chains.

JAB’s Caribou Coffee business has agreed to acquire Bruegger’s from Le Duff America, the U.S.-based operator of La Madeleine and Mimi’s Cafe, for an undisclosed amount. The deal is expected to close by the end of September.

The deal could hold more strategic significance for Le Duff than it does for JAB. The company, the American arm of French bakery giant Groupe Le Duff, has been preparing to expand its Brioche Doree in the U.S. Earlier this week, Le Duff America announced that it had hired Bloomin’ Brands veteran Julie Hauser-Blanner as president of Brioche Doree, a chain specializing in baked goods, sandwiches and salads. Its presence in the U.S. has been largely limited to nontraditional sites such as highway rest centers and airports.

Funds from the spinoff of Bruegger’s will presumably be used to fund the expansion of Brioche Doree.

JAB’s strategic plan for Bruegger’s was unclear. Caribou is the nation’s second-largest coffee chain, but a very distant runner-up to Starbucks.

The latter has been on a yearslong drive to focus more on food within its cafes. The effort has included buying several businesses. The only one still in operation is Milan-based Princi, a European bakery whose products will be offered in Starbucks' upscale Reserve Roastery branches.

As Princi’s global licensee, Starbucks has also indicated that it plans to open freestanding bakeries.

Its other restaurant brands include Krispy Kreme, Peet’s, Stumptown and Intelligentsia.

Retail brands within the fold include Keurig.