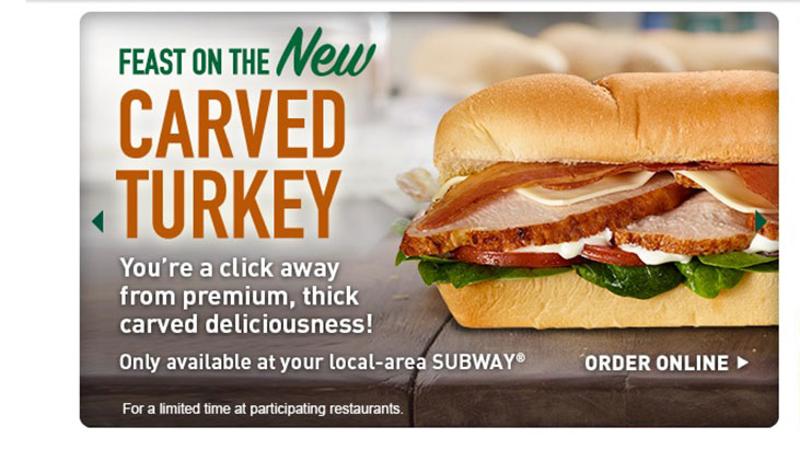 Subway is testing two premium sandwiches that could help the chain shake its perception as a place to grab a bargain-priced hero.

A 12-inch sub of carved roasted turkey is priced at $7.75 in the sales trial, and a footlong of rotisserie-cooked chicken sells for $6.75, reports BrandEating.com. Both are a marked departure from the chain’s signature offering of $5 footlongs.

Ironically, the test came to light as Subway is preparing for a modified BOGO deal on Nov. 3, National Sandwich Day. Customers who order a sub and a 30-ounce drink will be treated to a second sub at no extra charge.

The chain has struggled to boost sandwich prices beyond the $5 threshold, which it set for itself with one of the most successful quick-service restaurant campaigns of recent decades. A catchy jingle convinced consumers to sing along to commercials for the $5 footlong.

More recently, Subway has been pushing a Simple $6 deal, a bundled meal of a six-inch sub, a 21-ounce fountain drink and a bag of chips.

Subway has been smacked by catastrophic developments in recent months, including the death of co-founder Fred DeLuca and the public discovery that former pitchman Jared Fogle is likely going to jail for having sex with minors. It is also party to a class-action lawsuit involving anyone who bought one of its subs between 2003 and last month, a body that presumably includes millions of consumers. The plaintiffs contend that the chain’s signature footlong and six-inch subs failed to be as large as the advertising promised.

Subway proposed a settlement two weeks ago that calls for measuring the breads.