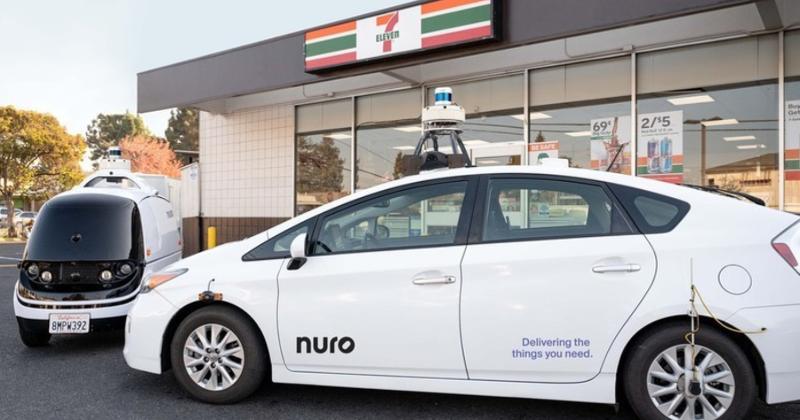 7-Eleven will start using self-driving Priuses from Nuro (foreground) and then the company's R2 bots (background). / Photograph courtesy of 7-Eleven

Convenience-store giant 7-Eleven is getting into autonomous delivery.

The 77,000-unit chain will use self-driving vehicles from Nuro to cart goods to customers in Mountain View, Calif., the company said Thursday.

Customers in the delivery radius can select autonomous delivery from 8 a.m. to 9 p.m. when they order with 7-Eleven's app, 7NOW.

The company did not reveal how many stores or vehicles would be part of the pilot, nor what the vehicles' service area will be.

7-Eleven joins the growing number of restaurant chains testing autonomous delivery either via sidewalk robots or on-road vehicles. Domino's, for instance, is doing limited tests with Nuro's R2 bots in Houston, and Chipotle is an investor in the company.

The Irving, Texas-based chain is a bonafide competitor for quick-service restaurants. It sells a variety of hot food and signature beverages, and it has its own restaurant brand, Laredo Taco Co., in some locations. It has also been an early adopter of technology.

Its robot delivery test will start with autonomous Toyota Priuses from Nuro and will later move to the R2 bots, which are designed specifically for delivering goods without an occupant. The Priuses will have a human operator to monitor the technology and delivery experience, the company said.

7-Eleven said it's the first company to offer autonomous commercial delivery in California, although other companies including C3, Kitchen United and Chick-fil-A have all reportedly tested robot delivery in the state.

Proponents of the technology say robots can deliver food more affordably and sustainably than human drivers. The service has started to gain significant traction in recent months: Large delivery providers such as Uber Eats and DoorDash have unveiled plans to deploy the technology, and the providers themselves are growing quickly behind private-equity funding.