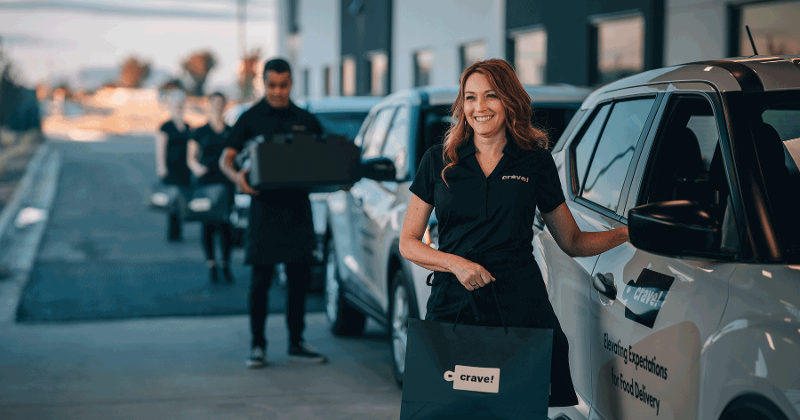 The Peached Tortilla, a Southern-Asian-fusion restaurant founded 10 years ago in Austin, chose an unlikely place to open its first location outside of its home market: Boise, Idaho.

The new branch is not a traditional brick-and-mortar, nor is it an addition to the restaurant’s fleet of food trucks. Rather, The Peached Tortilla Boise launched this week inside of a new facility operated by Crave Hospitality Group, a ghost kitchen provider promising end-to-end service for its restaurant partners, from a proprietary tech stack to a dedicated team of delivery drivers.

That all-in-one offer, along with the pressures of the pandemic, helped convince Peached Tortilla to take its brand 1,700 miles away.

“When Crave first approached us, my answer was initially, ‘We’re not interested in going to Idaho,’” said Eric Silverstein, founder of Peached Tortilla. But the more he looked into it, the more he liked what he saw.

“Crave to us seemed like it made sense. It was a very comprehensive plan—a lot of things were vertically integrated and put in-house that you typically wouldn’t see,” he said. “Typically there’s a few eggs outside the basket, so to speak.”

Crave was conceived as a way to give well-known independents a way to expand, with a model intended to offer premier service to those operators, said co-founder Scott Howard, who began developing the concept about a year and a half ago.

As a fine-dining chef, Howard witnessed the industry shifting toward delivery, and saw ghost kitchens as a way to capture some of that business. But he didn’t think the traditional model did enough for restaurants.

“You’re dependent on the gig economy drivers, and you’re also responsible for your own marketing,” he said. “So it’s really kind of hard to get a voice.”

Crave’s integrated technology system, marketing and culinary teams and fleet of “mobile servers” are intended to offer a better experience for both restaurants and guests.

Crave has seven concepts up and running in its Boise facility, with a total of 14 set to launch by the end of the year. They include Tony G’s Pizza out of San Francisco, Elliott’s Oyster House out of Seattle and Los Angeles-based Rock House Sliders.

Guests can order from multiple concepts via Crave’s app and have them delivered together. Once Crave receives the order, its tech system calculates the cook times for each item and fires them appropriately so they’re all finished at once, Howard said.

Drivers are trained on the Crave menu as a waiter would be. When they drop off an order, they’ll arrive in branded Crave cars and uniform, address the customer by name and reference what they’ve ordered.

“One of the key things that we spoke about from the very beginning was bringing hospitality to the delivery business,” Howard said.

Though Crave operates the same as other ghost kitchen providers, Howard doesn’t like the term because he feels it’s associated with warehouses tucked away in low-trafficked areas.

“Our buildings are very visible,” he said. “We’re buying great properties in very visible areas,” with storefronts and pickup areas for guests. The 15,000-square-foot Boise property is in a business park that’s home to 8,000 employees, Howard said.

Venture-backed Crave has aggressive growth goals, with plans to open 11 facilities in the next two years in midsized markets such as Salt Lake City, Dallas and Scottsdale, Ariz. Crave’s strategy, like that of other ghost kitchens, is to bring concepts to new markets for less than what it would cost to open an actual restaurant there.

“One thing people might say, going to Boise, smaller population—how does it all work, the economics of it?” said Silverstein of Peached Tortilla. “I don’t have the answer to that. I just know that in Austin, there’s a tremendous amount of competition and noise. Some of the thought is there’s not as much noise to cut through in some of these other cities that are also booming in their own way.”

Crave restaurant partners pay $6,000 per month to cover things like rent, gas, electric and water, Howard said. Crave also takes a 20% cut from each order to pay for marketing and drivers. Eight of its concepts have signed on for three-year terms, and these “anchor tenants” will expand with Crave as it grows, Howard said.

The Peached Tortilla’s Crave operation has been open for less than a week, and Silverstein said it’s too early to say how things are going. But he has confidence in the Crave model.

“I think that Crave understands that there needs to be a significant marketing push for this type of concept,” he said. “Once we get the product and service in people’s hands, then it should speak for itself.”