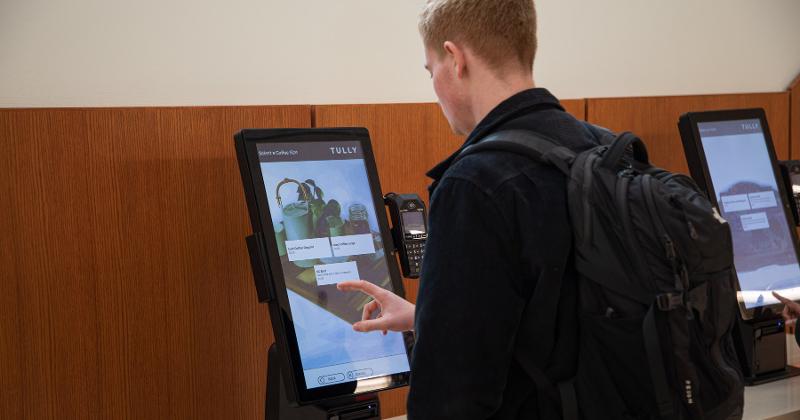 Focus on STEM (Science, Technology, Engineering and Math) has been a long-running trend in education, from elementary schools to universities. And it’s on full display at Boston College’s newest eatery, Tully Cafe, which is infused with the spirit of science and advances of technology.

Tully’s opened on Jan. 18, the same day as the building that houses it: 245 Beacon Street. The 150,000-square-foot, state-of-the-art facility is the centerpiece of the college’s $300 million initiative to invest in the sciences.

The BC dining team took the science theme and ran with it at Tully’s, which serves customizable Mediterranean-style bowls. Technology is on display there, too, with self-serve kiosks, mobile ordering and smart lockers for contact-free pickup.

The “Lunch Amalgam” menu lets students mix and match ingredients to build their own bowls, called “experiments,” or choose from a variety of signature ones.

“It’s not every day that you get to roll out a new dining [operation], so it was really exciting for us, particularly during the pandemic, that a new building was going up,” says Beth Emery, director of dining services. “We knew that the focus of the building was integrating the sciences with many other departments on campus, so we wanted to embrace that—and [expand on] some of the newer technology we had been exploring.” 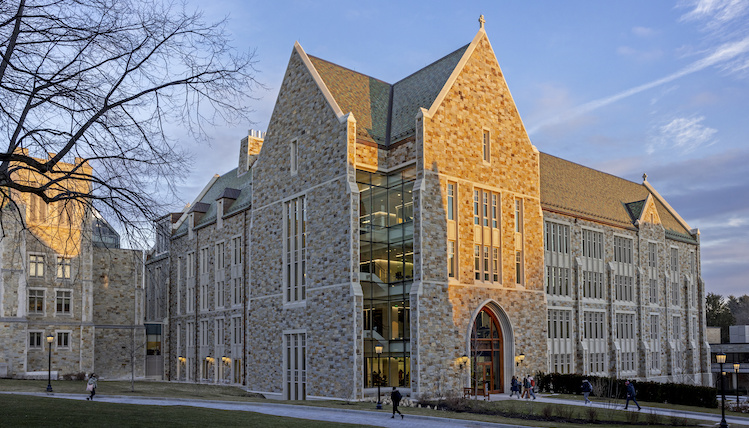 Boston College had already launched mobile ordering, which allows students and staff to place orders ahead via an app. And some locations had smart lockers where staffers can place orders for customers’ secure pickup. Those existing technologies proved helpful once COVID hit, facilitating contact-free ordering.

“We had really wanted to test out self-order kiosks, though, and as soon as we heard about the new building we thought: This is the place to do it,” Emery says. “We're always benchmarking with what's out there in the community, and if you go down near Fenway Park, all of the casual quick-serves had these kiosks.”

So Tully’s was built not just around the smart lockers, but also self-service: Students simply walk up to the large touchscreens with attached PIN pads; tap to select their beverages, bowls, snacks and more; and check themselves out. Emery made sure to set up a professional photo shoot so the team can display high-quality photos of menu items on the kiosks. 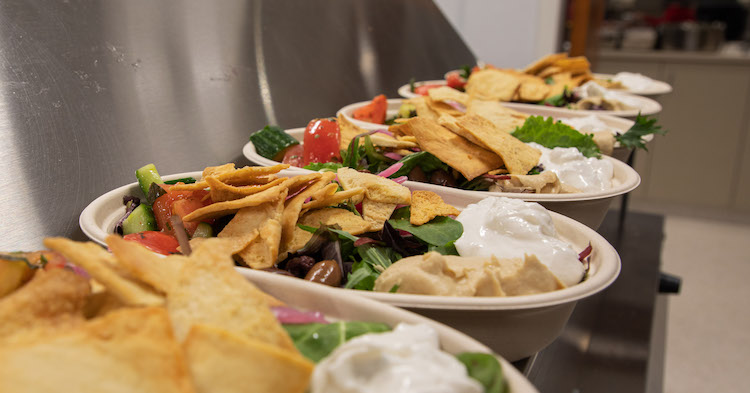 More than 4 million meals are served at Boston College each year. / Photo courtesy of BC University Communications

“It does take some education at first, but once they do it, the second and third time, they’re moving through a lot faster,” Emery says. During the first two weeks, it took Tully’s customers an average of 68 seconds to place an order, and that number quickly fell to 54 seconds—a figure Emery suspects is even lower now.

The tech-focused foresight proved particularly helpful given the COVID-fueled staffing challenges that have ramped up in 2022, says Assistant General Manager Tony Dedek.

“The whole technological end of foodservice has changed 180 degrees, especially since COVID,” he says. “[Operators] are getting out of that comfort zone of, ‘Of course we need a register.’ The question is instead becoming, how can we make this faster and more efficient? How can we better utilize the people we would have had working registers, instead putting their time toward something else that helps move the operation along?” 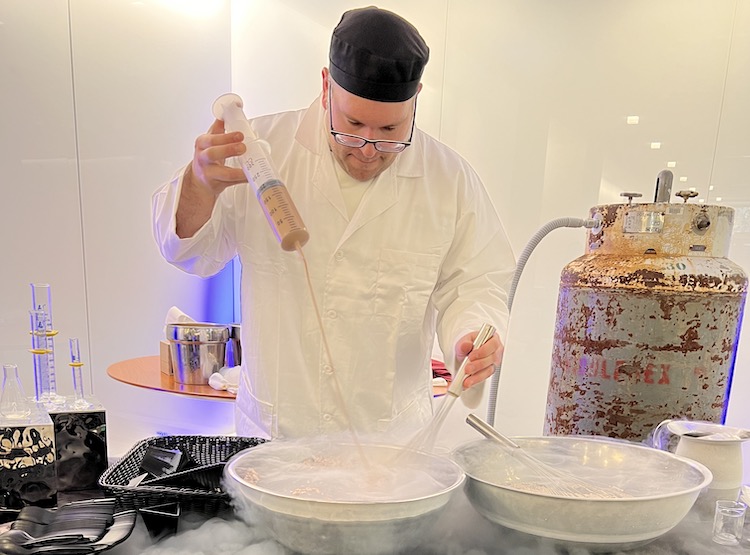 Liquid nitrogen plays a role in a pop-up event at Tully. / Photo courtesy of BC University Communications

That’s a more attractive proposition for Boston College’s army of 800-plus student foodservice workers, who are “an absolute godsend” amid staffing challenges, says Dedek, who has only two full-time employees working with him at Tully’s. They plan to test the kiosks at other BC dining locations as well.

Both Dedek and Emery recognize some operators might shy away from certain technologies, particularly those that replace a point of potential interaction like checkout. But they feel strongly that when operations are intentional about keeping connections strong, tech complements rather than usurps that human touch.

“It all boils down to that old-school customer service: It can free you up to have more time to talk about the menu with a customer, to say hello as they’re passing by, to welcome them, to show them how the kiosks work,” Dedek says. “New technology doesn’t change that need for old-school service.”