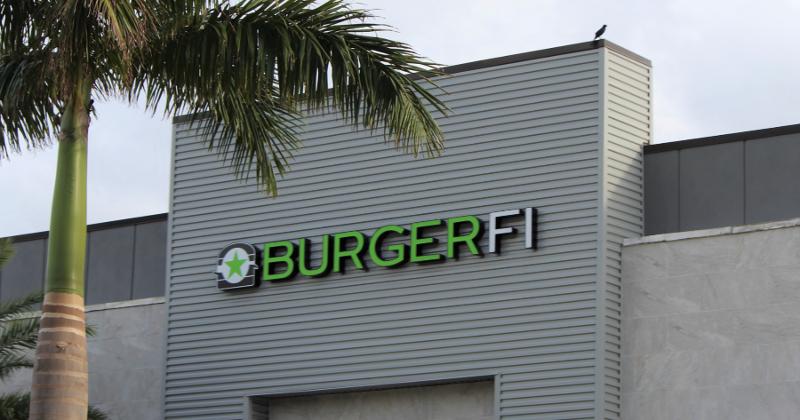 When BurgerFi began installing self-service kiosks in four of its restaurants in November, it was hoping they would do a number of things: Free up cashiers, increase revenue, improve the customer experience.

Six months later, the devices appear to have accomplished all three and then some. Now, the Boca Raton, Fla.-based fast casual is bringing them to 17 of its 27 corporate-owned locations and is encouraging franchisees to use them as well.

After a look at the results, it’s clear why BurgerFi is so gung-ho about the kiosks, which marry hardware from Samsung with software from Grubbrr. Average ticket sizes for orders placed through the devices were 18.5% higher than those placed at the register, and they captured an average of 133 orders per day, or about three out of every four transactions, according to data provided by the chain. 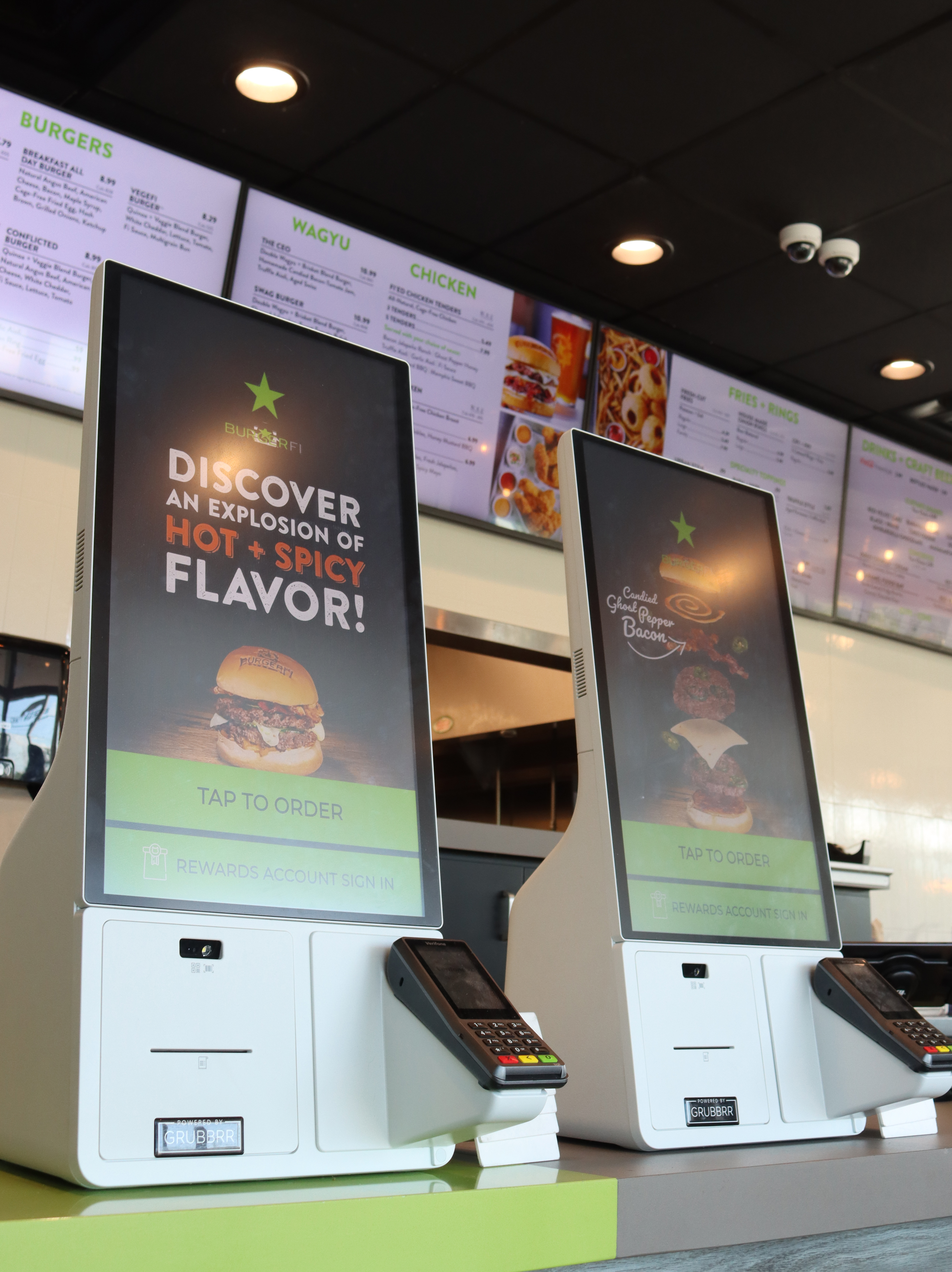 BurgerFi has found that two kiosks plus one or two registers works best. / Photograph courtesy of BurgerFi

That should come as welcome news for a brand that has struggled to generate sales recently. Same-store sales for the fourth quarter were down 8% at corporate restaurants and 5% at franchised locations, the chain reported, citing the omicron surge in January.

The new technology could benefit the bottom line, too: With kiosks shouldering more of the order-taking load, BurgerFi has reallocated cashiers to the dining room, where they can refill drinks, promote dessert and otherwise assist customers. The extra attention contributed to the chain’s highest customer satisfaction scores in the past 12 months, said Chief Technology Officer Karl Goodhew.

“There’s probably a tipping point in terms of customer experience in the store and making sure the customers are getting the service that they need,” he said.

Ordering kiosks have been in restaurants for a while. McDonald’s made a big push to add them to all of its stores starting in 2018, for instance. But the technology has been given a fresh jolt by the hiring problems that have plagued restaurants coming out of the pandemic.

Customers seem to like them, too. Given the option, guests gravitate to the kiosks, said Grubbrr CEO Sam Zietz, who would often visit BurgerFi to observe how people interacted with them. And without the pressure of a long line behind them, they’re able to get a long look at the menu.

When ordering at the register, “it’s always easiest to go with, ‘I’ll get a cheeseburger, fries, drink, done,’” Goodhew said. “Now they’ve got time to browse through the menu.”

“We refer to it as the hover effect,” Zietz added. 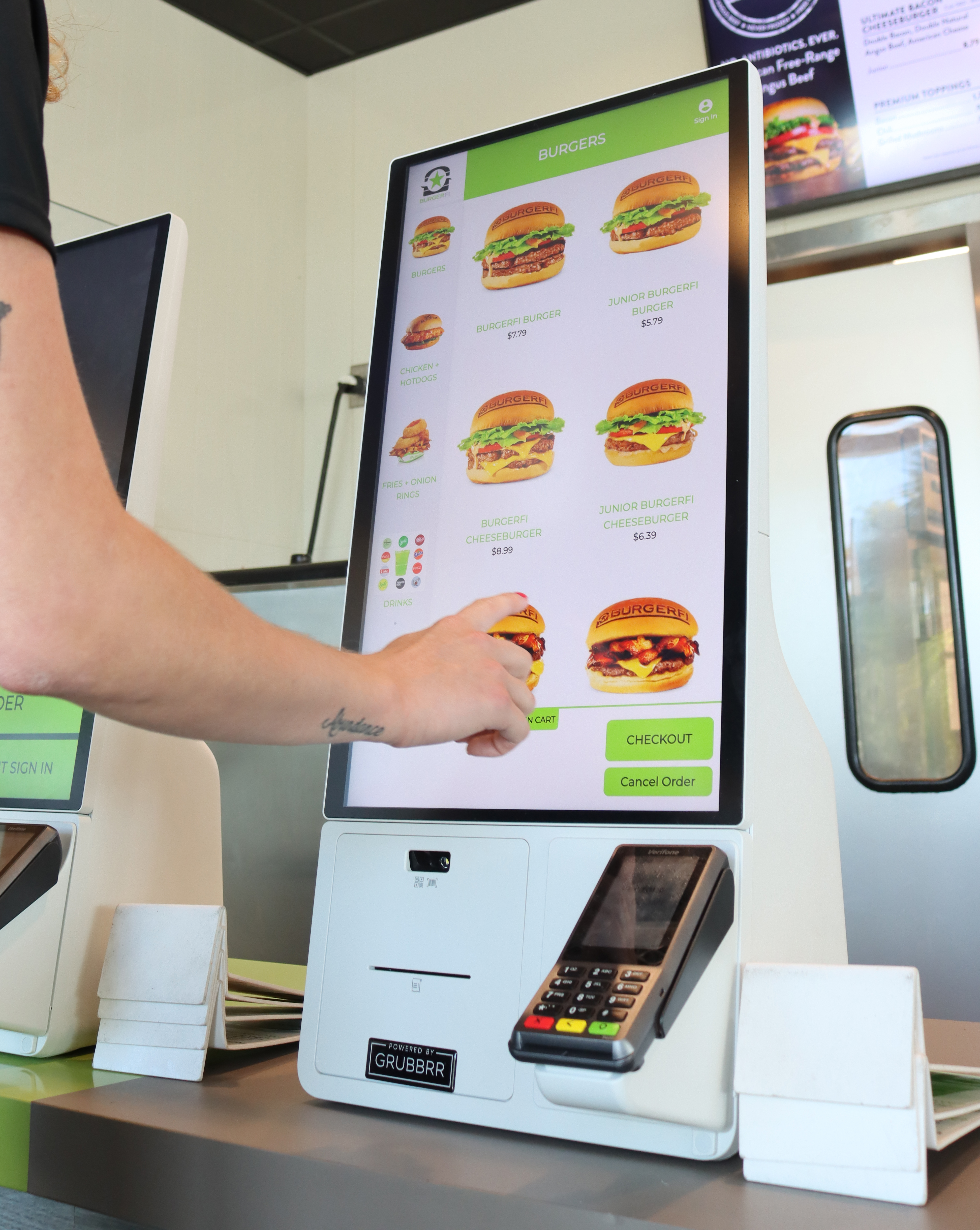 BurgerFi customers spend an average of 18.5% more when ordering at a kiosk. / Photograph courtesy of BurgerFi

The extra browsing hasn’t necessarily led kiosk users to order different things, Goodhew said, but they do tend to order more items. More than half (52%) opted in to automated upsells at a kiosk, choosing to tack on fountain drinks, fries and shakes at a higher clip.

And to Goodhew’s surprise, customers typically tip the same amount at a kiosk as they would at the register.

“Tipping percentage was, to the second decimal point, identical,” Zietz confirmed—and that was coming on higher checks.

That allayed Goodhew’s concerns that staff might see lower tips as a result of the machines, and therefore balk at working with them.

BurgerFi has found that two kiosks paired with one or two registers works best, with kiosks positioned on the counter to save floor space.

“We’re trying to do it so that the customer is greeted with kiosks, and then they have the option of POS a little later on,” he said.

They are part of a broader technology push under Goodhew that also includes server robots and QR-code enabled ordering, all intended to ease the labor shortage.

The CTO came to 124-unit BurgerFi last May, moving over from the big-box retail sector, where self-ordering kiosks have been around for years. Restaurants have been slower to catch on, partially because of sticker shock.

“They just assume that they can’t afford it,” Zietz said. Grubbr, though, has “democratized the pricing” of the technology, he said: The Samsung hardware retails for $2,500, and Grubbrr’s software costs about $200 a month.

The design of the hardware itself was a selling point for BurgerFi, Goodhew noted. While most kiosks are cobbled together from different components, the Samsung machines are self-contained. “I don’t have to go buy three different parts,” he said.