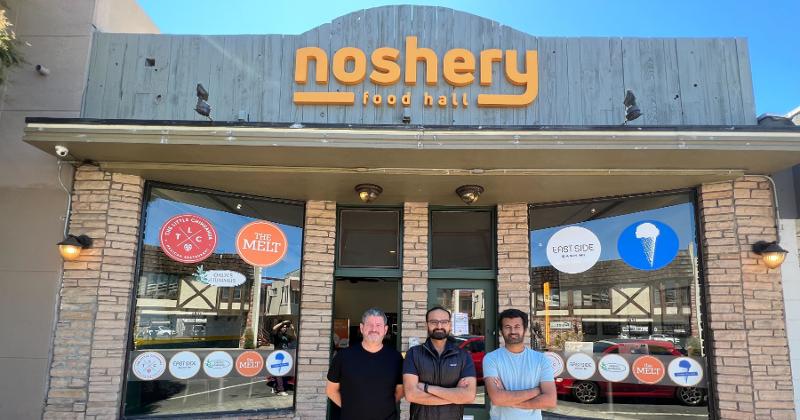 Byte Kitchen, a startup that operates high-tech food halls, has raised $6 million from a group of investors including the co-founder of Caviar and the founder of Black Bear Diner.

The company’s stores, called Noshery Food Halls, house up to eight local restaurants that license their brands to Byte. Byte cooks the food and runs the facility. The company says the model allows independent restaurants to reach new markets without having to make a big investment.

Byte currently has two locations, in San Carlos and San Mateo, Calif. Each one is home to eight restaurants, most of which are from the Bay Area: Oren’s Hummus, The Little Chihuahua, the Melt, Kasa Indian Eatery, Curry House by Asian Box, The Pastry Cupboard, and Humphry Slocombe Ice Cream. One brand, East Side Banh Mi, hails from Nashville.

Customers can mix and match from multiple restaurants for delivery or pickup. They can order online or at kiosks in the store.

Byte Kitchen is part of a trend of so-called virtual food halls that has developed out of the ghost kitchen boom. A similar startup called Local Kitchens, also located in San Francisco, raised $25 million last year. And big ghost kitchen companies like Kitchen United, Reef and CloudKitchens are also opening their own takes on food halls.

The format combines a focus on takeout with a more welcoming front-of-house experience that traditional ghost kitchens tend to lack.

“Independent restaurants are the heart of local communities, and we started Byte Kitchen to amplify their reach across the nation,” said Byte Kitchen CEO Divyang Arora in a statement. “However, in a market saturated with ghost kitchens and virtual brands, we believe product quality is what will win in the long run. At Byte Kitchen, we’re committed to upholding the trust of our restaurant partners, from faithfully executing their recipes to maintaining strong relationships with customers.”

According to Byte’s website, brand partners sign off on the food before Noshery is allowed to serve it, and the chefs “can stop by to test the product at any time.”

Byte also offers a loyalty program that gives customers points for every dollar they spend.

Byte said it would use the capital to help it expand in California and beyond.