Tiffany Rogers wanted a permanent home for her catering business.

Latisha Clark hoped to pursue her passion for feeding people.

One by one, the chefs found their way to Carnegie Food Hub, a CloudKitchens facility in Cleveland’s MidTown neighborhood.

They were drawn in by a proposition of $5,000 or more in weekly sales, their own kitchen and equipment, plus marketing, cleaning and other support from the company.

But their visions of success soon faded. And one by one, they left.

Clark closed her kitchen after just 30 days. Instead of generating $5,000 a week, her soul food concept, Our Favorite Auntie’s Kitchen, grossed $6,600 in its first month. That wasn’t enough to cover her $5,000 monthly fees—let alone recoup the $6,342 “kitchen commitment” Clark had to pay before she opened.

Clark said CloudKitchens misled her about how much money she’d be able to make. “They just set you up to fail,” she said. “And it’s not like Cleveland is the first place they’ve done that.” 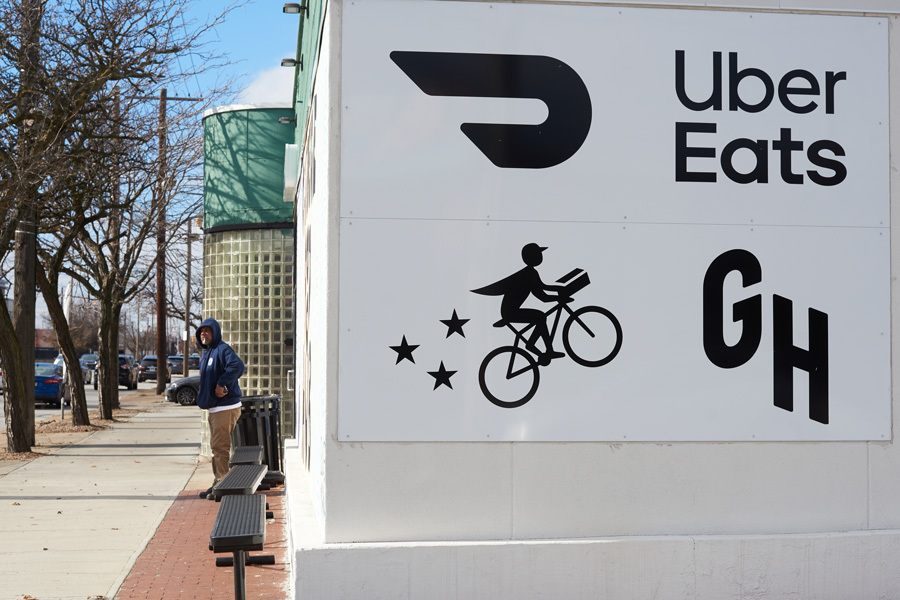 Delivery apps are the main source of orders at CloudKitchens. / Photos by Emily Baldwin

CloudKitchens, founded in 2016 and led by Uber founder and former CEO Travis Kalanick, has more than 60 locations across the U.S. It buys buildings and converts them into warrens of commercial kitchens, then rents them out to operators.

The company’s website makes a simple pitch to prospective tenants: You can start a restaurant quickly (in about six weeks) and for far less (about $30,000) than the cost of opening a brick-and-mortar. CloudKitchens handles things like order processing and handoff, so you can focus on cooking. You can break even in six months. It’s “the secret ingredient to growing your business,” the website reads.

And yet many restaurants within CloudKitchens have failed. A Restaurant Business analysis earlier this year found an average turnover rate of about 65% across 20 locations. Former tenants described a lack of marketing support, poorly maintained facilities and defective technology. Some poured thousands of dollars into their kitchens before closing, unable to turn a profit.

At Carnegie, which opened in early 2022, the story was similar—and the turnover even higher.

When Freeman opened his restaurant, Greedys 2, in February, there were about 12 other operators in the building, he said. When he left, earlier this month, there were four. Only one of them was there when he started.

Freeman, echoing Clark and others, said CloudKitchens’ salespeople gave operators false hopes to get them to sign up, then left them to fend for themselves.

“They target people who just basically have a dream,” Freeman said. “The biggest thing is getting that deposit from you. Because they know once you’re out of there, they got the deposit.”

After Greedys 2 moved in, he said, support from CloudKitchens was hard to come by. When he asked his initial contact for help with technology and advertising, it took them weeks to respond.

“How can I ever resolve situations when the person who signed me up for a lease never gets back in touch with me?” he said. “It was like they really weren’t trying to help.” 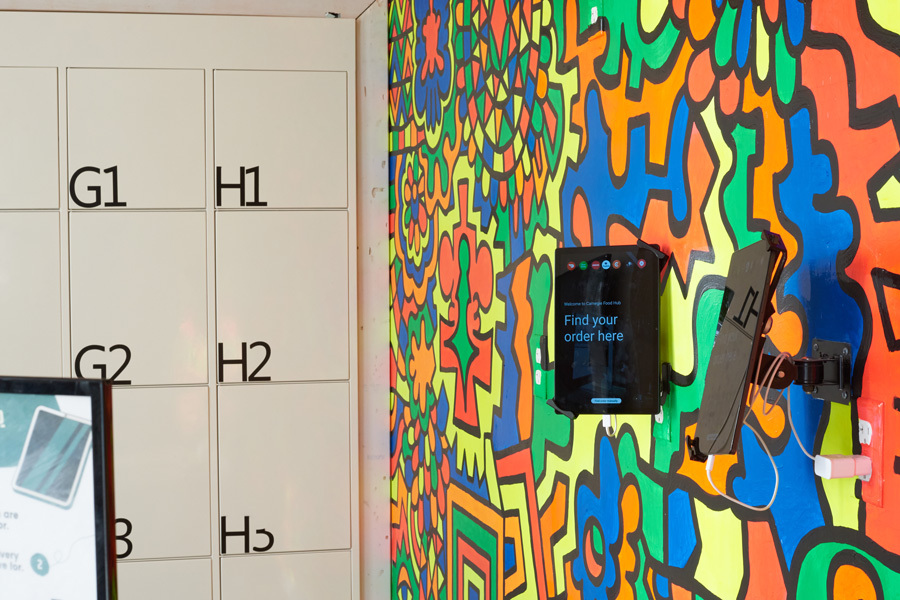 Pickup lockers and tablets in the lobby of Carnegie Food Hub.

Tiffany Rogers, a graduate of Loretta Pagliani School of Cooking in nearby Chesterland, came across CloudKitchens while looking for a dedicated space for the catering business she’d been running since 2014.

She opened Mema’s Soul Food inside Carnegie last spring behind $10,000 in startup expenses. But the restaurant struggled to generate enough sales to cover her $5,000 monthly dues.

Her efforts to improve the business were sometimes thwarted by CloudKitchens itself, she said. More than once, she put business cards in the lobby. Management removed them, she said, and told her she’d have to pay to put up a sign. Mema’s was never fully onboarded to Uber Eats and DoorDash within CloudKitchens’ ordering system. And when she fell behind on payments, the company turned off her system altogether.

Dave Pruitt, a former truck driver with a catering business, also came to Carnegie hoping to advance his food career.

With his two concepts, 216 Cafe and the more upscale Krejuns, CloudKitchens estimated he’d be able to do $20,000 in sales a month. Instead, the restaurants bled money.

Pruitt criticized CloudKitchens for not doing enough to promote Carnegie, which is located near the main campus of the Cleveland Clinic as well as Cleveland State University. “Nobody knew what it was,” he said.

And he was constantly going back and forth with the company over invoices he felt were incorrect. He was told, for instance, that his first two months would be free, but was billed within 30 days.

“The first month, we weren’t even really on the delivery apps,” he said.“They put us in bad situations. It’s like they will not do anything to help the business.” 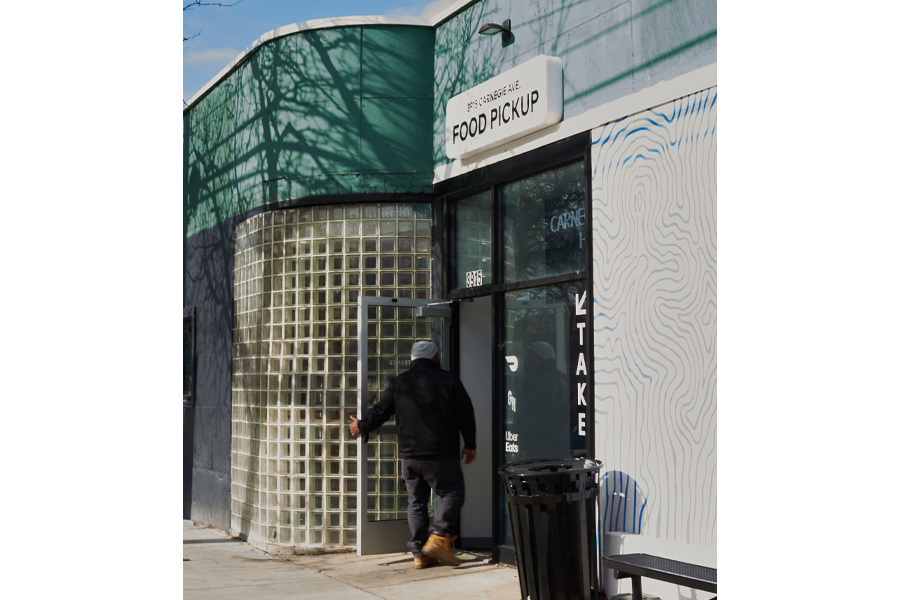 Carnegie is located in Cleveland's MidTown neighborhood, near a major hospital and a university.

While most former occupants contacted by RB blamed CloudKitchens for the failure of their restaurants, at least one looked inward.

“I knew what I was getting into when I signed my lease,” said Ayanna Augustine. “I knew there was a risk that I was taking.”

Augustine ran two restaurants at Carnegie: jerk chicken concept Yanna’s Dough Spot and the potato-centric Big Starchy Bihhhh. She was featured in a local news segment in July, and her restaurants got good ratings online. But they ultimately didn’t make it.

“I failed,” she said. “I learned from my failure. … I don’t necessarily want to put any additional energy into CloudKitchens.”

Augustine agreed with others, though, that CloudKitchens had not been fully transparent.

“Of course they lied,” she said. “They’re salespeople.”

And she said that she’s better off now. After leaving Carnegie, she quickly got a GM job at a fine-dining restaurant.

But for others, the experience at CloudKitchens left them in dire straits and dampened their ambitions.

“I took my savings and put it all into [CloudKitchens] for it to blow up in my face,” Rogers said.

She still does small catering gigs here and there, she said, but for the most part, “I just ain’t been motivated.”

Pruitt, too, came out of the situation broke and discouraged.

“They took all my money, literally,” he said. “I’m done with the food business now.”

Former tenants’ efforts to hold CloudKitchens accountable have fallen short. Pruitt filed a complaint with the city of Cleveland in an attempt to get some of his money back, but it was unsuccessful.

Clark, meanwhile, has been trying to organize a class-action lawsuit against the company. But she said lawyers have been unwilling to challenge an arbitration clause in her contract that says disputes have to be resolved by a mediator rather than in court.

“I’m so frustrated and feeling defeated,” she said in an email this week.

CloudKitchens’ perspective on the parade of closures at Carnegie and other locations is unknown. A manager who answered the phone at the facility this week declined to comment and instructed a reporter to contact corporate. Emails to the company’s public relations account have gone unanswered.