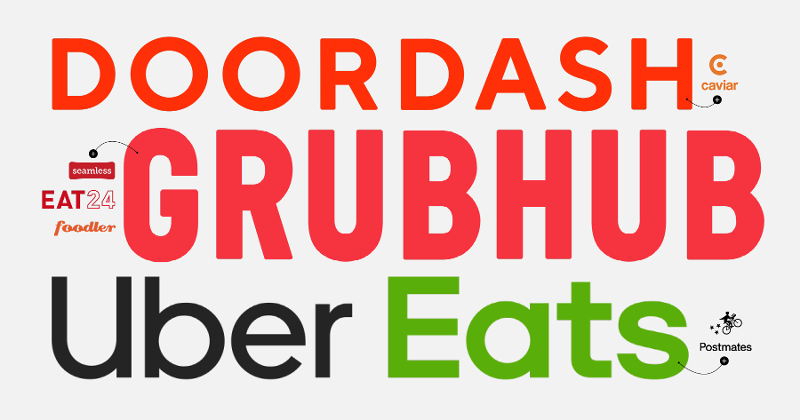 And then there were three.

With the acquisition of Postmates by Uber Eats last week, a food delivery market that just five years ago included a range of national and regional players is now almost entirely concentrated under three behemoths: DoorDash, Uber Eats and Grubhub.

The market also features a different leader than it had in 2015: the fast-growing DoorDash, which owns more than 50% of the food delivery space and will look to continue its dominance with the help of an initial public offering launched last week.

It’s a clear win for the big three, who have gobbled up most of their smaller competitors to create massive networks that will make their services more efficient. For restaurants, it’s a decluttering of a once-crowded marketplace, but it also limits restaurants’ leverage when dealing with delivery providers.

“On one hand, yes, reduced competition among suppliers tends to make it harder to negotiate,” said Melissa Wilson, principal with RB sister company Technomic. “On the other side, one of the challenges for many operators has been working with so many providers. Particularly when there were so many they had to work with to cover an area … some would have six to seven tablets in the kitchen,” she said.

Technomic used to track 12 or 15 delivery companies, Wilson said. In a 2016 report on third-party delivery, though, the researcher foresaw the winnowing of that group.

“For [third-party] providers, there is a clear impetus toward consolidation, operator expansion, and service evolution,” the On-Demand Delivery Report said. “The delivery market is increasingly crowded, which will compel providers to invest in training, support services and POS integration to differentiate themselves from competitors.”

Acquisitions picked up over the next few years, with Grubhub—then the market leader with more than 50% of sales—swallowing smaller competitors like Delivered Dish, Eat24 and Foodler. Last year, DoorDash acquired Caviar, and this year saw the completion of the Uber/Postmates deal. Delivery providers outside of the big three now account for roughly 1% of sales, compared to more than a quarter in 2015.

The consolidation took place alongside the growth of delivery itself, driven to a fever pitch this year by the COVID-19 pandemic. Providers are reporting huge increases in revenue as consumers and restaurants alike have come to depend on the service. More than a third (37.5%) of restaurants said they would have gone out of business during the pandemic without a third-party delivery partner, according to an October report by digital signage provider Raydiant.

However, those conditions won’t last forever. Delivery levels are likely to remain elevated, but when dining rooms reopen and it’s safe to congregate again, providers’ rapid growth could slow. DoorDash, in particular, will have new investors to answer to. That pressure, combined with a consolidated delivery market, could set up a dangerous dynamic for restaurants.

“The biggest risk to restaurant owners in this model is that you have such a powerful force like DoorDash that will have all this cash, that at some point when their growth gets affected, they can squeeze restaurant owners even more,” said Eric Schiffer, CEO of the Patriarch Organization, a private-equity firm focused on tech and media.

That could mean higher fees and commissions, which, at levels as high as 30%, are already hard on restaurants. Or it could mean delivery companies competing directly with restaurants via ghost kitchens or co-branded concepts, Schiffer said.

As a delivery provider, “you have the distribution system, why would you not want to do that?” he said.

Some of that is already happening. DoorDash has dabbled in ghost kitchens with its DoorDash Kitchens service and a recent effort to help restaurants reopen as ghost kitchens—though it has yet to create its own brands. And in October, it worked with Bay Area restaurant Burma Superstar to open a delivery-only location called Burma Bites.

Acquisition is another way delivery providers could continue to grow, either by buying small, regional providers or through another megadeal.

“I would think that there would be more absorption of the smaller companies,” Wilson said. “I think [the big three] are too large to gain approval for consolidation. They’ve reached that point.”

But Schiffer did not rule out the potential for a deal between two giants, such as Uber buying DoorDash.

“For the smart money, I think that’s the most likely probability downstream,” he said. “DoorDash runs out of gas, and then Uber comes to pick them up.”

Such a deal would draw intense scrutiny from federal regulators: Uber’s attempt to acquire Grubhub this spring collapsed under antitrust concerns. Grubhub instead agreed to be acquired by Amsterdam-based Just Eat Takeaway in a $7.3 billion deal that CEO Matt Maloney told CNBC was simply better than Uber’s offer.

Grubhub, the former delivery leader, has slipped to third among the big three, with 16% share, according to documents filed by DoorDash with the Securities and Exchange Commission. But as the original consolidator watches its competitors get bigger, the company seems content with keeping its head down rather than playing catch-up.

“There were lots of competitors before, there will be lots of competitors after. It’s not like Postmates is going away,” said Chief Revenue Officer Seth Priebatsch. “So Uber, DoorDash, Postmates can all build their businesses in ways that they see fit, and we try to, in a healthy way, keep some blinders on.”