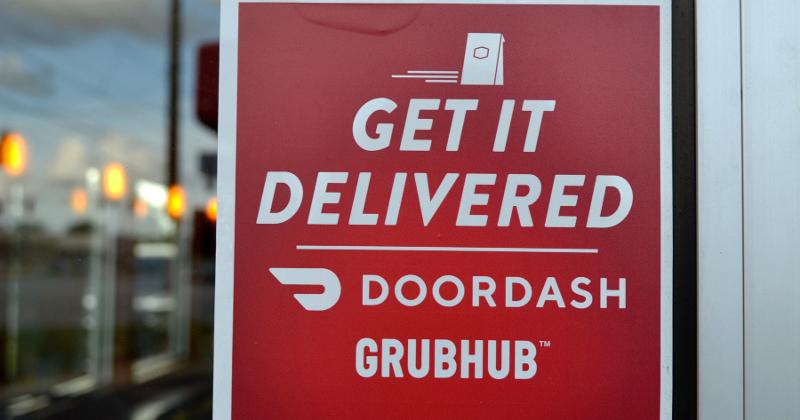 CORRECTION: A previous version of this story included an inaccurate description of San Francisco's fee cap. It has been updated.

DoorDash and Grubhub are suing the city of San Francisco over its permanent 15% cap on delivery fees, arguing that the measure is unconstitutional and a "dangerous overreach."

The cap, initially created as a temporary aid for restaurants during the pandemic, became permanent this month despite concerns from San Francisco Mayor London Breed.

The companies said it violates their rights under both the U.S. and state Constitutions and is asking for damages and for the court to put a stop to the law.

"Left unchecked, the ordinance’s interference with voluntary, private contracts between businesses would set a dangerous precedent for government overreach," the companies said in a complaint filed Friday in U.S. District Court in Northern California. "It should be struck down."

The complaint also reiterates the companies' belief that caps ultimately hurt restaurants—a stance they have held since the limits began popping up nationwide during the pandemic. They said a permanent cap will result in higher prices for consumers and could affect the services the companies offer in San Francisco.

The city's cap is the first in the nation to be made permanent. It prohibits all fees charged to restaurants by delivery companies from exceeding 15% of an order total. The Board of Supervisors voted unanimously to make it permanent last month, a move met with praise by the Golden Gate Restaurant Association (GGRA).

"This legislation will help ensure our San Francisco restaurants can continue to operate in a financially sustainable way as they recover from the past year-plus with limited capacity and lost revenue," the group said at the time.

When the measure reached Breed's desk, though, the mayor chose not to sign it, ultimately allowing it to go into effect.

"Though I appreciate an intent to continue to protect our small businesses, this ordinance is unnecessarily prescriptive in limiting the business models of the third-party organizations, and oversteps what is necessary for the public good," she wrote in a letter to the board on July 9.

She welcomed the prospect of further legislation that would add some flexibility to the restrictions.

The GGRA said it was disappointed to hear about the lawsuit. It is working with officials on legislation that would expand upon the cap, allowing restaurants "to sign additional contracts for marketing services, SEO and consumer discounts, and pass-throughs for credit card fees," it said in a statement.

Delivery fee caps have been generally embraced by restaurants, which have complained about the fees charged by delivery providers, particularly during the lean days of the pandemic. Most of the caps land at either 15% or 20%, and are designed to expire sometime after restaurants are allowed to return to normal operations.

Delivery companies have responded by raising prices for consumers to help soften the impact of the caps. DoorDash has said those measures have in turn hurt order volumes.

In April, the company also rolled out a new pricing plan that gives restaurants more control over the fees they pay. Restaurants can choose from one of three commission tiers—15%, 25% or 30% per order—with a higher level of service at each tier.

Grubhub also has a negotiable fee structure based on the level of marketing and visibility a restaurant wants.

DoorDash said it will continue to abide by the 15% fee cap regardless of what tier a restaurant chooses, noting that the "vast majority" of San Francisco restaurants have opted in to one of the higher tiers. But it said it might need to limit the products and services it offers if the fee cap remains as-is.

"Imposing permanent price controls ... is an unprecedented and dangerous overreach by the government and will limit the options small businesses rely on to compete in an increasingly competitive market," a DoorDash spokeswoman said in a statement.