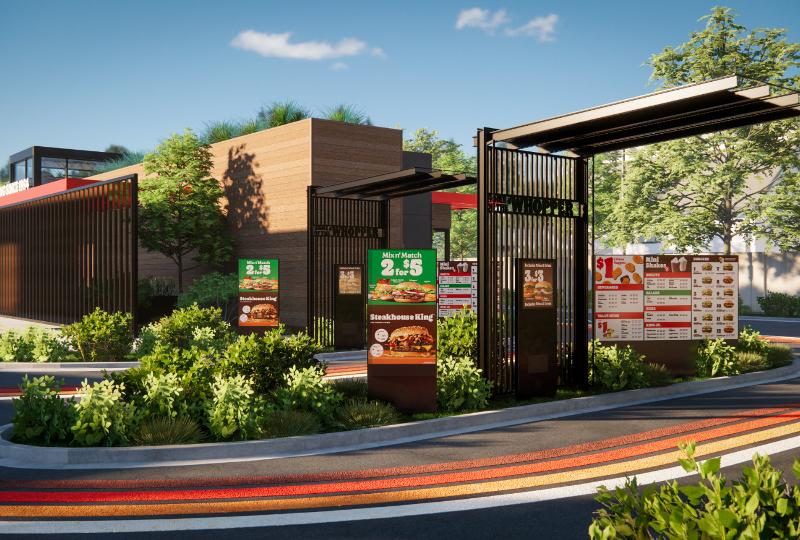 Sometimes you want to go where everybody knows your name. Soon, that place is just as likely to be the nearest drive-thru as the corner bar.

That’s because chains are working rapidly to make their drive-thrus smarter, with the help of technology that can do things like identify a customer and then offer them “the usual.” As the lane has become fast food’s premier channel during the pandemic, restaurants want to make sure they’re getting the most out of all those customers passing through.

“Drive-thru was always the balance between the speed of service and [personalization],” said Rakesh Patel, executive director with NCR Hospitality. “Especially in a contactless environment, how do you become more personable with your consumer?”

Dunkin’ is among the brands working to answer that question. The Canton, Mass.-based chain is testing drive-thrus that can recognize a loyalty member as soon as they pull up using geolocation within its mobile app. That triggers AI-powered digital boards that will greet them by name, display their loyalty points and recent orders, and ask if they want to add their customary donut along with that coffee.

“If you happen to be a loyalty guest, and I know that you are there in front of the digital menu board, you have that moment of time where you have this one-to-one relationship with that menu board,” said Gagan Sinha, VP of IT with Dunkin’ Brands, during RB’sFSTEC Community last month.

That kind of personalization can produce upsells, and also help with throughput by easing the decision-making process for customers, Patel said.

“On digital channels such as app or web, you see people take a lot more time” compared to the drive-thru, he said. They browse the menu, make customizations and add items at their leisure, often resulting in a higher check. “Because you don’t feel the pressure of the line behind you, you go through that natural progress.”

Artificial intelligence could make the drive-thru more like that. Picture the following scenario: An incoming customer is identified, which could happen in a number of ways—a camera scanning license plates, mobile app geolocation or even facial recognition—activating changes to the menu board tailored to that person. Not only could it influence what they order, but it could also help them make the decision faster by displaying items they’re likely to choose.

NCR currently provides the infrastructure that unites the various layers in that process and is also working on its own end-to-end solution.

“It was really around creating that personalization experience but keeping the drive-thru still with the speed of service that you would expect,” he said.

This type of technology is not new. McDonald’s has been using AI in the drive-thru since acquiring tech company Dynamic Yield in 2019, with operators reporting bigger tickets as a result. But more restaurants are starting to recognize its benefits, and becoming increasingly sophisticated in how they use it, said Chris Siefken, global head of technology with Xenial, a tech supplier for restaurant chains.

“Not only have we seen an uptake of technology we’ve had in the past, but we’ve seen people embrace machine learning and the AI component of this,” he said.

That means moving beyond simple rules-based selling—in which anyone who orders a burger would be asked if they want fries, for example—to powerful algorithms that draw from troves of data and become smarter with each transaction.

“I don’t think I’ve ever seen marketing departments so technologically aware of the math behind what they’re doing,” Siefken said.

Burger King is one chain leaning heavily into AI. Its team of five in-house data scientists worked with tech giant Intel to develop a drive-thru recommendation algorithm that uses variables such as weather, time of day and the first thing a customer orders to generate targeted suggestions.

“If you put a milkshake as the first item in your basket, that’s going to influence other items the system suggests to you based on what we know about what has sold in the past, what’s selling today, what sold at that store and other factors,” said Whitney Gretz, VP of digital and loyalty for the Miami-based chain.

That technology along with new digital menu boards are in place in about 1,000 Burger King locations, with the main goal being to increase ticket size, Gretz said.

A/B tests have revealed that the AI-driven recommendations are not only succeeding in that goal, but are also improving, with customers adding those offers at a higher rate over time.

“We’re getting better at this. We’re getting smarter at this,” Gretz said. “At the end of the day, the core finding is that more and more people are liking our recommendations.”

The chain made some surprising discoveries, too, that illustrate the limitations of basic rules-based selling. For instance, Burger King customers will order milkshakes in any weather, even when it’s cold out.

“Sometimes it’s that counterintuitive thing that makes the most sense,” Gretz said.

Investing in the drive-thru was a no-brainer for Burger King: A majority of its transactions came through that channel before the pandemic, and that number has only grown since.

“Drive-thru is here to stay for our space and definitely for us as our main channel,” Gretz said.

Dunkin’ has taken a similar approach, as its approximately 6,400 drive-thrus were key to its pandemic recovery. It is testing its new system in a few of them, with plans to roll it out nationwide.

“As we look at the drive-thru of the future, tech plays a huge role in what that experience will look like,” Sinha said.