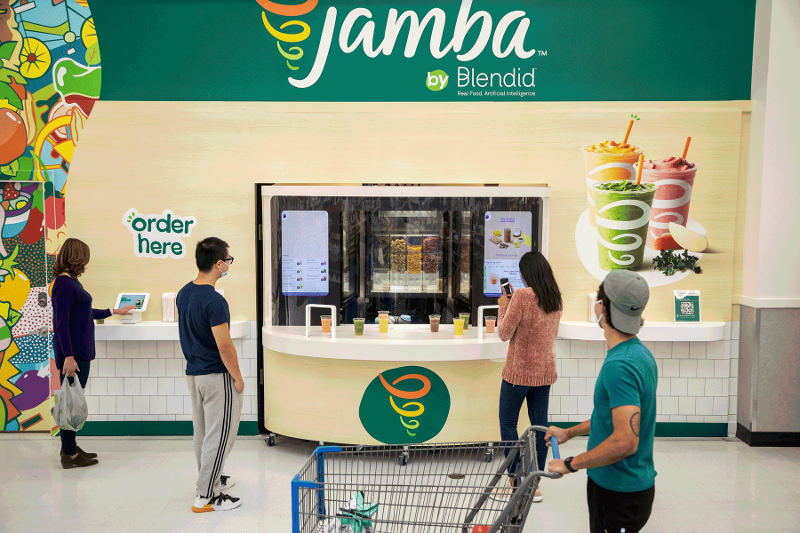 Photograph courtesy of Jamba and Blendid

Juice chain Jamba is getting into the robotics world with a new automated smoothie-making kiosk.

The unit is a co-branded venture with robotics company Blendid, which is licensing the robot to Jamba. It opened Wednesday inside a Walmart in Dixon, Calif.

It’s a significant development in the realm of fully automated, vending machine-esque devices like Piestro, Bobacino and others—most of which are in the early stages of fundraising and marketing. These stand-alone bots are pitched as a way for restaurants to expand their footprint and provide a unique experience for guests.

“You can scale up the business in a big way because there are so many places where people go and expect good food,” said Vipin Jain, CEO and co-founder of Bay Area-based Blendid.

That thinking aligned with Jamba’s strategy around growing with technology.

“We see an opportunity to get Jamba into more locations, make it even more accessible, and create solutions where our team members can leverage the latest in technology to efficiently serve our guests,” said Jamba President Geoff Henry in a statement.

Jamba has more than 850 locations worldwide, including about 360 in California.

Blendid’s 8-foot by 8-foot kiosk features a robotic arm and various ingredient dispensers that automate smoothie prep and delivery in a process that takes about three minutes. The bot can produce 45 smoothies per hour, and it can make nine smoothies at once, Jain said.

Customers can order via Blendid’s app or at the kiosk itself using a QR code, selecting from a menu of plant-forward blends co-created by the culinary teams at Jamba and Blendid.

In tests, Blendid was fulfilling between 100 and 200 orders daily, Jain said. A Jamba employee will be responsible for cleaning and restocking the machine, probably once or twice a day.

Jamba will pay Blendid a licensing fee per order and will share some revenue with Walmart.

The Atlanta-based juice chain, owned by Focus Brands, is Blendid’s first licensing partner. More agreements are in the works, Jain said, including additional locations with Jamba.

“We obviously are working with everybody you can imagine in the food retail and foodservice space,” he said.