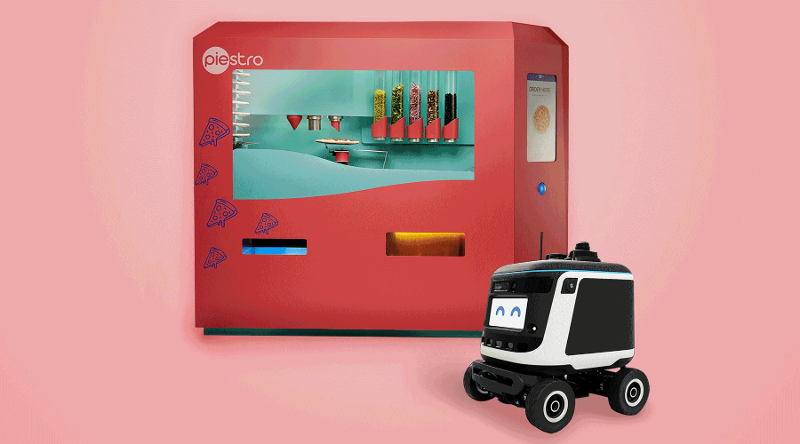 A robot that can make a pizza in three minutes is attracting interest from investors and restaurants alike.

Piestro, billed as a fully automated pizzeria, is a stand-alone unit stocked with enough fresh ingredients to make up to 80 pizzas. A customer can walk up to the machine, place their order on a touchscreen and watch through a window as it’s being made. Piestro’s pizza will also be available via third-party delivery and robot delivery under a partnership announced Wednesday with Kiwibot.

The California-based company, which is backed by venture capital firm Wavemaker Partners and led by the founder of Kitchen United, is still in its prelaunch phase. It recently maxed out a $1.7 million funding round on crowd-funding site StartEngine and is planning a second round with a $5 million ceiling.

Piestro’s plan is to grow as its own pizza brand in spaces like food courts, office buildings and college campuses, as well as provide a white-label solution for pizza restaurants, by next year.

“[Restaurants] can really expand fast, and for a lot less money” with Piestro, said Massimo De Marco, the company’s CEO. They could use the bot to test new markets as part of a hub-and-spoke model, or they could put a Piestro inside of an existing restaurant, he said.

The company has fielded interest from regional and national chains across the country, and is working with two to launch branded Piestros in 2021, De Marco said.

“We are working with a couple of different brands, to perfect their recipes so they can be made by our fully automated pizzeria,” he said.

Each robot costs $60,000, with restaurants responsible for restocking and basic maintenance and cleaning. Pizzas are 12 inches, and the average price is about $10, De Marco said. The current model offers five toppings, plus cheese, sauce and protein options, and the company is aiming to grow that number to at least seven.

Piestro is not the only pizza bot on the market to generate some buzz recently. Picnic, which automates the assembly of pizza and other food items, last week announced a $3 million fundraise. It has a unit at T-Mobile Park, home of the Seattle Mariners, under a partnership with hospitality provider Centerplate. And xRobotics last month announced the pilot of its own pizza-assembly bot at a Dodo Pizza restaurant in Oxford, Miss.

While Piestro touts some of the same efficiencies promised by those bots, it’s envisioned as a front-of-house solution, with an emphasis on the spectacle of automated pizza-making.

“This is a full experience. This is something the customer can actually enjoy,” De Marco said. “You can walk over to the Piestro machine and order the pizza and then watch the pizza be made right in front of you.”

But customers will also be able to have Piestro’s pies delivered. Under the company’s integration with Kiwibot, customers within a 1-mile radius of a Piestro can place an order via mobile app, which will alert a Kiwibot to retrieve the pizza and deliver it.

In a video on its website, Kiwibot promises free delivery in under an hour. The bot is currently in use at several college campuses.

“We want people to get the pizza there fresh,” De Marco said. “Having another tool in their box besides just Piestro, having the Kiwibot, allows them to reduce the cost” of using a third-party delivery provider.