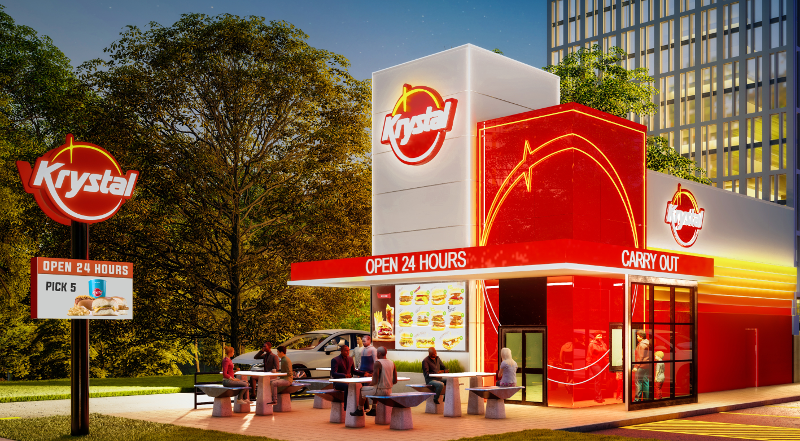 Krystal has a new prototype that takes into account takeout orders and provides more flexibility./Photo courtesy of Krystal

The burger chain Krystal operates 300 restaurants. Most of these are in the Southeast, particularly four states: Tennessee, Georgia, Florida and Alabama.

Thus, the artificial intelligence the chain is about to start testing in its drive-thrus can’t just pick up the English language. It needs to pick up the many different accents of that language in the chain’s markets.

“We’re a Southeast brand,” Chief Marketing Officer Alice Crowder said in an interview. “We are in some heavily rural markets with lovely Southern accents. We need something to understand our customers.”

Thus, Crowder said, Krystal’s A.I.-enabled drive-thru menu boards, which the company will start testing next month, will be able to understand those accents.

It’s part of a strategy by the Dunwoody, Ga.-based chain to evolve nearly a year after its sale out of bankruptcy court.

Krystal under its new owners is moving aggressively to shift its direction after a tough couple of years. The company filed for bankruptcy in January last year, before the pandemic, amid unit closures and sales challenges. Krystal closed 18 locations last year and 63 since 2017, according to data from Restaurant Business sister company Technomic. The chain was sold to one of its lenders last year.

The company has high hopes for its new prototype, which is designed to jumpstart growth by improving flexibility and taking more advantage of a customer that is ordering a lot more of their food for takeout or delivery.

“People want to eat where and when they want,” said Crowder, who returned to Krystal in June to head marketing for the chain. “Off-premise dining is growing and expanding every day. This build allows for faster in-and-out times, faster speed of services and multiple ways for the guest to access us, through walkup, drive-thru and grab-and-go.”

The company plans to start testing digital menu boards in its drive-thrus next month that incorporate A.I. The program is expected to learn and gather data on what people order at what time of day and what items customers are more likely to add to their orders based on the items they initially requested.

For instance, Crowder said, the program may know that a customer is more likely to add an Icee to a chicken sandwich combo than they would additional fries. “You get increased check and increased add-ons,” she said.

The goal, however, is for the program to take the orders. Ease of ordering and drive-thru speed have become table stakes in a fast-food business where the drive-thru is even more popular than it was before the pandemic. As it was, drive-thru orders frequently accounted for more than two-thirds of sales at many quick-service chains before quarantine. In many cases that’s as high as 90% or above.

“When I came in one of my first and highest priorities was the menu and menu ordering process, to make that as efficacious as possible,” Crowder said.

It’s also coming at a time when many fast-food restaurants struggle to adequately staff their restaurants. Artificial intelligence that takes orders in the drive-thru could reduce the need for some labor inside of restaurants. “Labor is tight,” Crowder said. “If I can get rid of a unit of labor by getting this up and running, that makes it more valuable.”

The combination of increased demand for takeout and the labor challenge is pushing more companies to explore artificial intelligence, viewing that as a solution to some labor and efficiency problems. Several companies are at least exploring the idea of A.I. ordering, including the giant burger chain McDonald’s.

Crowder expects the artificial intelligence to start taking orders in company locations by the middle of next year.

The new prototype also increases real estate flexibility. It has a much smaller footprint that can fit into smaller sites and doesn’t need as much parking space. Crowder said the company expects to build “several” of these new locations next year, including new company units, new franchises and renovations.

“We move aggressively in this brand,” Crowder said.