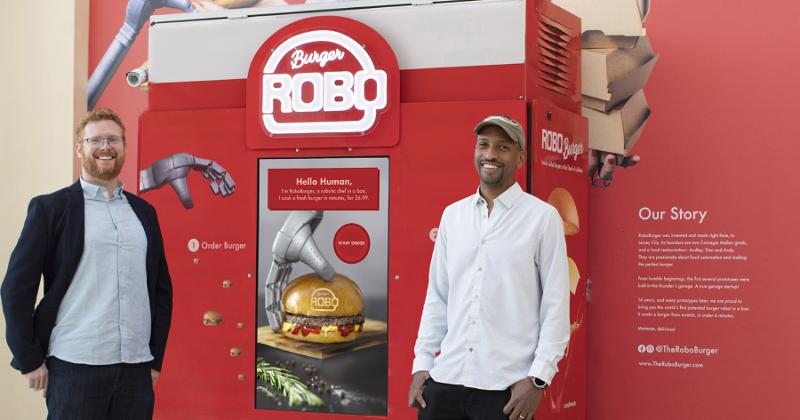 RoboBurger, a maker of automated burger vending machines, has landed an undisclosed amount of funding to help scale up production.

The infusion came from London-based Promethean Investments and is part of a seed round that RoboBurger hopes will bring in $10 million. Creative Director Teo Bazgu said Promethean's investment makes up "a good percentage" of that sum.

RoboBurger was launched in 2019 by friends Audley Wilson and Dan Braido, who met while attending Carnegie Mellon University. They built an initial prototype in Wilson’s dad’s garage and have honed it over the years into a 12-square-foot box that can produce a freshly cooked burger in about four minutes.

It’s part of a growing crop of fully automated food kiosks that can make everything from pizza to smoothies—though RoboBurger may be the first to offer grilled burgers on demand.

As it looks to expand, RoboBurger has its eye on places like airports, hospitals and universities, where its machines can offer a hot meal around the clock with no human labor. Bots will soon be headed to a Pilot Flying J truck stop in Newark, N.J.; a university in Queens, N.Y.; and the Port Authority Bus Terminal in Manhattan.

Its first location opened in March at Jersey City’s Newport Centre mall. It incorporated feedback from that experience into its latest model, RoboBurger Mark 2, which features an improved burger recipe and cooks patties in four minutes instead of six.

Each RoboBurger can hold up to 50 burger patties as well as buns, cheese, ketchup and mustard. Additional toppings, like tomatoes and lettuce, aren’t offered for food safety reasons. A burger sells for $6.99 plus tax.

“We have received an overwhelming amount of interest from around the world,” CEO Audley Wilson said in a statement. “This new round of funding will allow us to rapidly scale up and keep up with the incredible demand as we continue to roll out RoboBurger units across the U.S.”

UPDATE: This story has been updated to correct the amount of money RoboBurger raised.