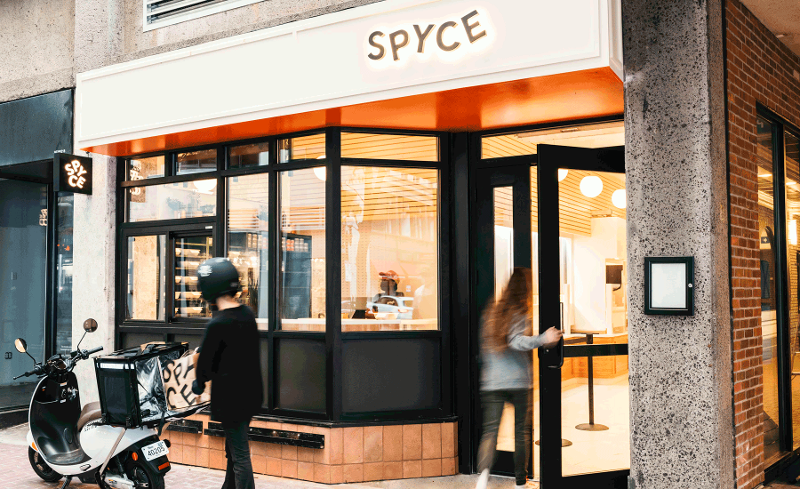 Spyce, the robot-powered Boston-based bowl concept, is relaunching this week with a new robot, a new menu and an all-electric delivery fleet.

The restaurant, founded in 2018, shut down temporarily last November, citing a need to “make [customers’] experience even better.”

Specifically, the food could be better, and the ordering process more personalized, CEO and co-founder Michael Farid said in an interview with RB. To accomplish that, Spyce underwent a reinvention that touches just about every part of the restaurant, from the food itself to the robot that cooks it. It reopens Tuesday in Boston’s Downtown Crossing area, with a second location planned for Harvard Square.

“It made more sense, instead of scaling, to go back to our model … and reinvent what we invented,” Farid told the media during a call in October.

Spyce added salads and created new bowls using flavors and cooking techniques from around the world. And ingredients are now prepped in-house for optimal freshness. Previously, food was prepped off-site in the name of efficiency and to save space in the 1,200-square-foot restaurant.

“What we learned was that the food can sometimes not be quite as good when it’s prepped off-site,” Farid said. With the revamp, Spyce was able to find the space to do it in-house. 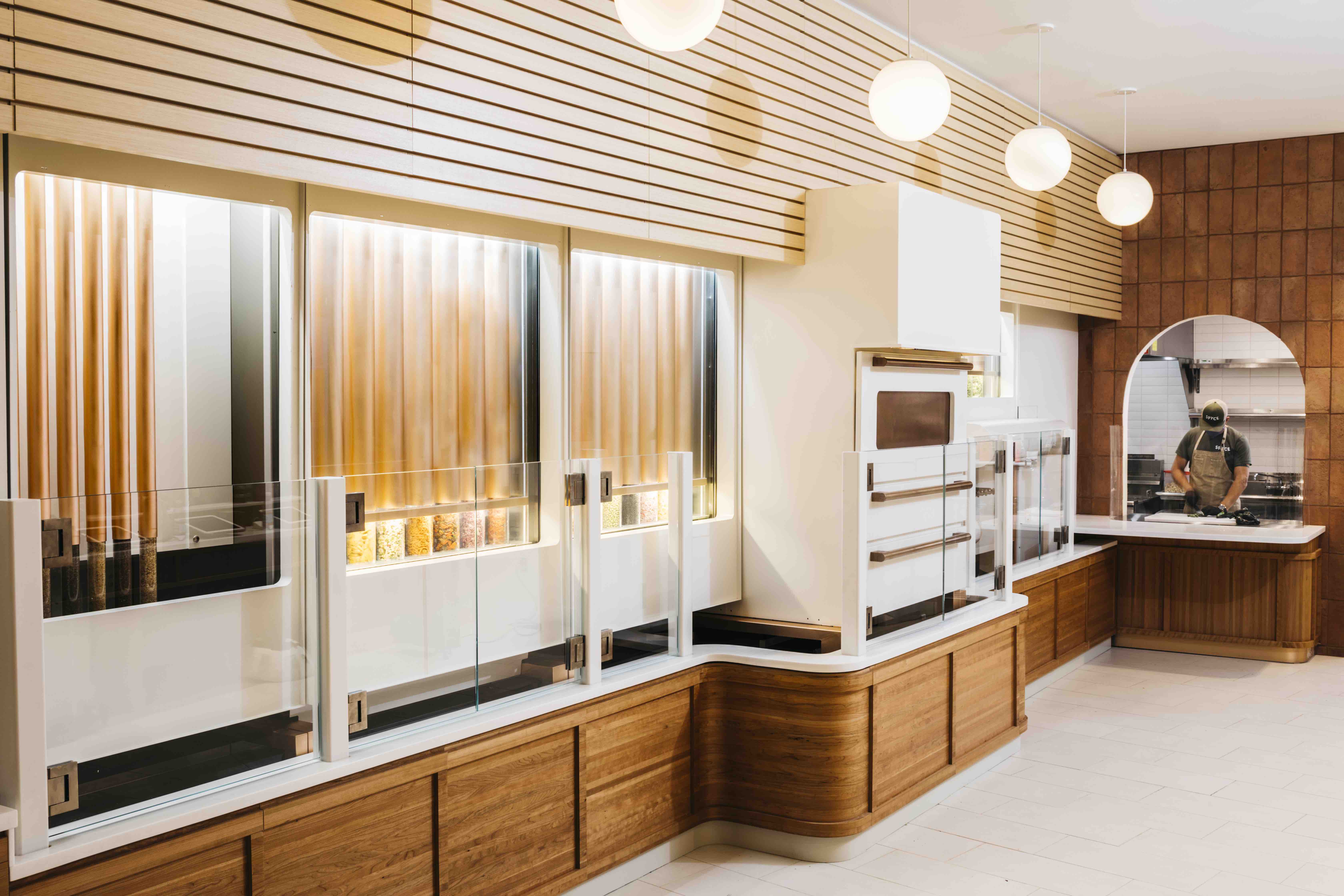 The bot is made up of a plancha or griddle divided into multiple temperature-controlled lanes, each for cooking a different ingredient. A steamer component cooks grains and pasta, and a separate element dispenses sauces and garnishes. The ingredients are deposited at intervals into bowls that travel through the bot on a conveyor belt.

The Infinite Kitchen can produce up to 350 bowls per hour, Farid said, and can complete an order in two to five minutes. 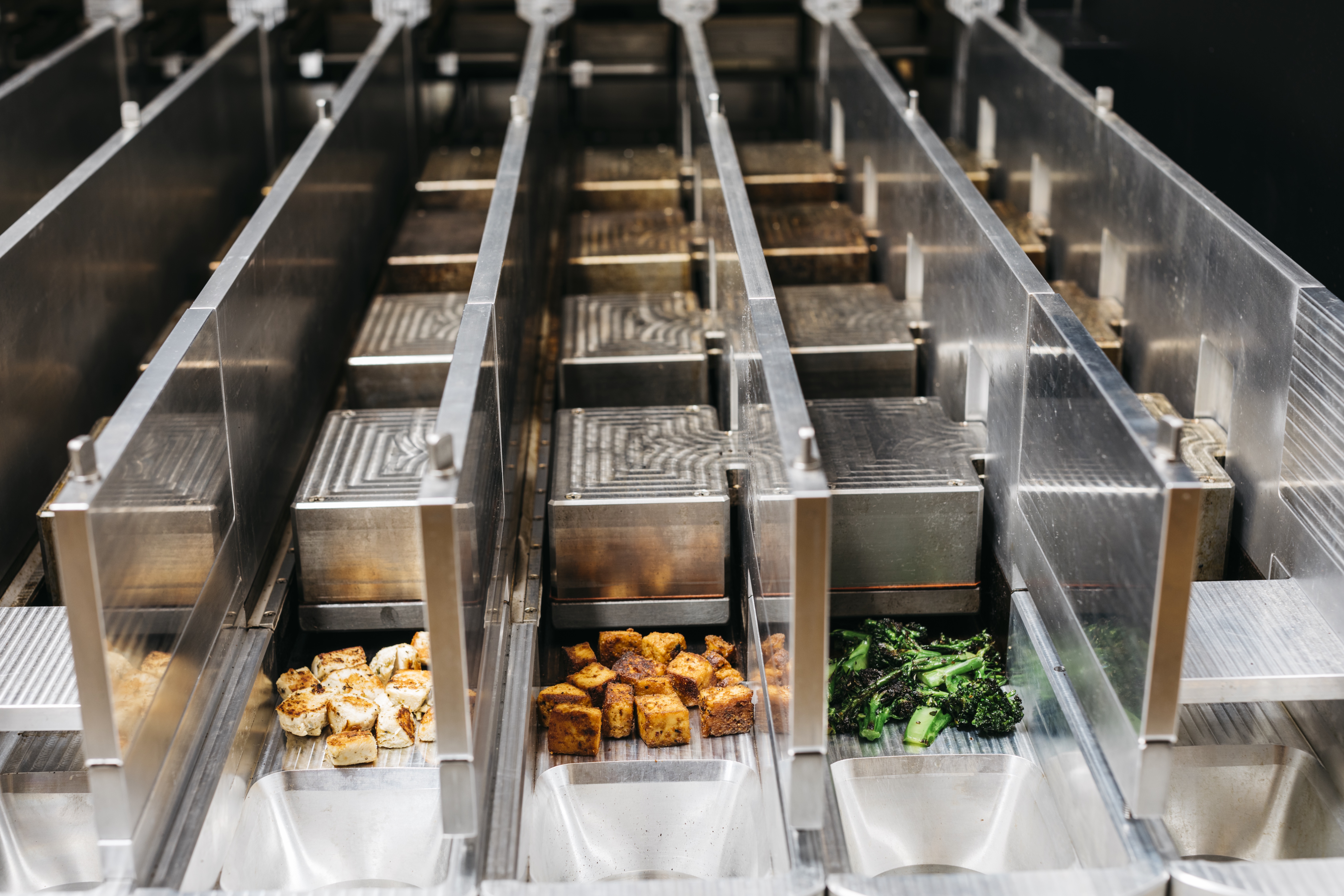 Ingredients are cooked on an automated griddle in separate, temperature-controlled lanes. / Photograph courtesy of Spyce

Customers can order via Spyce’s website, in-store kiosks, or via a new app optimized for personalization. Using what Spyce calls its “dynamic menu,” guests can select a dietary or allergy preference, and the app instantly reshuffles an item’s ingredients to fit those parameters.

And they can now have their Spyce delivered, via a fleet of 20 electric-powered mopeds that will begin a test phase this week. To preserve the food’s freshness, hot and cold ingredients will be delivered in separate containers.

The zero-emission vehicles made by SomEV also have separate compartments for hot and cold. They’ll be driven by Spyce employees and will initially service Boston’s Back Bay area before expanding their radius to half of the city, Farid said.

Labor efficiencies provided by the Infinite Kitchen made the investment in a delivery fleet possible, he said. With the bot on cooking duty, Spyce is able to operate at about half the headcount of a restaurant doing similar volume, he said.

With its ability to both cook and assemble meals, the robot represents some of the most cutting-edge foodservice automation out there. But Farid said Spyce doesn’t consider itself a tech company, and has no plans to license the Infinite Kitchen.

“Our goal is not to make best automation in the world—our goal is to make the best, fresh-tasting, vegetable-centric meal,” he said.