The Dubai-based ghost kitchen company will give Reef a foothold in the Middle East and North Africa.

It is the latest step in fast-growing Reef's plan to open thousands of its delivery-focused kitchen vessels this year. It currently has more than 300 locations worldwide. Most of them are in North America, but the company's expansion plans are global in sccope.

“The Middle East and North Africa are crucial markets in the rapidly evolving F&B and retail industries, and our acquisition of iKcon will position REEF to become a leader in the region,” said Tommy Rosen, Reef's head of development, in a statement.

IKcon has 15 "smart kitchens" across the United Araba Emirates and Saudi Arabia, with eight more scheduled to open soon, according to its website. Those kitchens house some combination of more than 70 restaurant brands, including Dunkin', Just Salad and Charleys Philly Steaks.

DoorDash is launching nationwide shipping. Starting Monday, customers can order food from restaurants across the country and have it delivered in a few days. Restaurants currently offering the option include icons such as Katz's Deli and Carbone in New York as well as local favorites like Big Shakes Hot Chicken from Franklin, Tenn. DoorDash is partnering with UPS and FedEx to fulfill the orders, and restaurants can also choose to ship the food independently. The feature mirrors the services of Goldbelly, an online marketplace for long-distance restaurant delivery.

A robotic restaurant raised $3 million. Mezli is an automated Mediterranean grain-bowl concept created by a group of Stanford engineers and chef Eric Minnich. A prototype has been serving food to some customers in San Mateo, Calif., and the company will use the seed funding to develop an updated version expected to launch next year. Investors included Zaid Ayoub, CEO of the Sajj Mediterranean fast-casual chain. 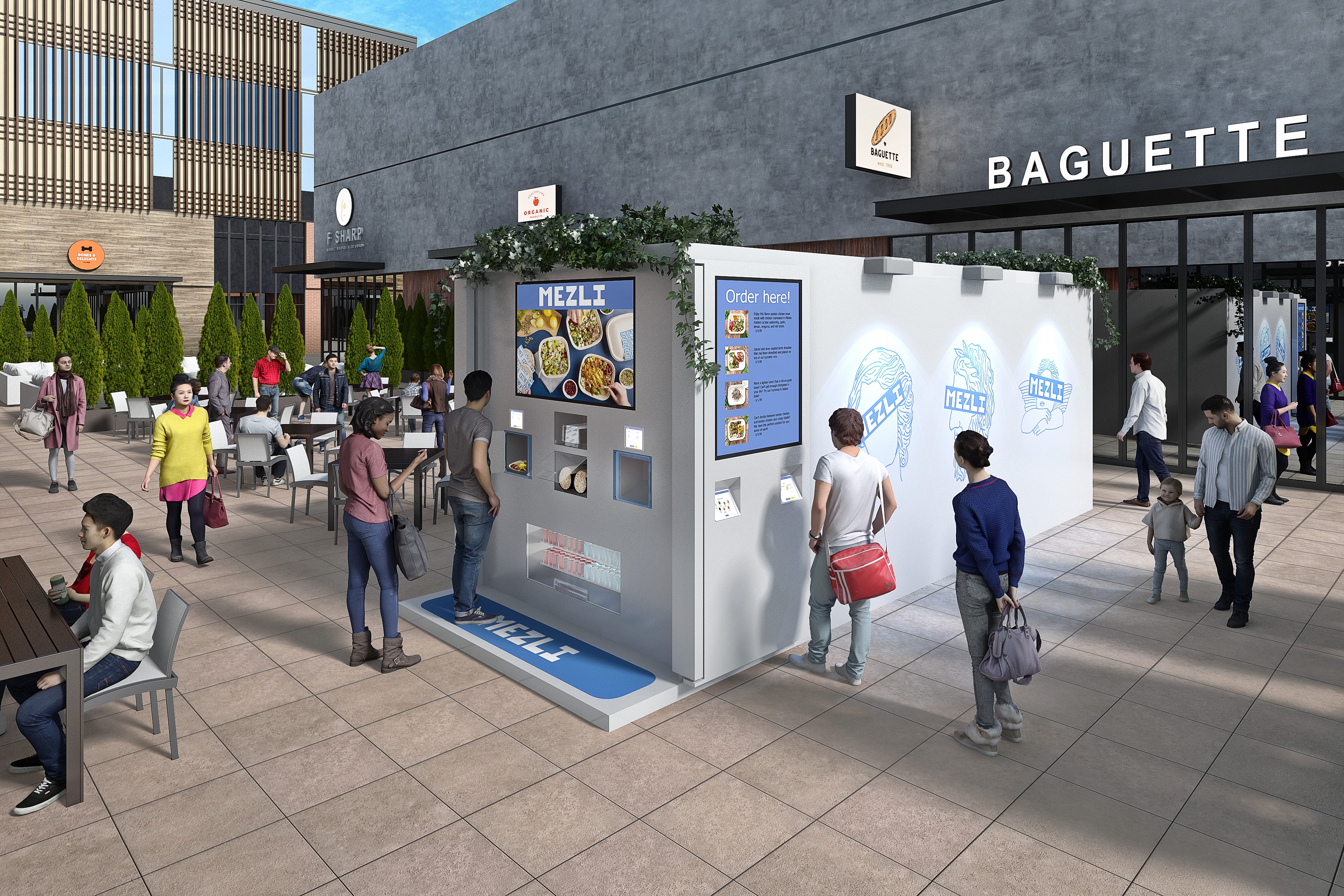 A rendering of Mezli's robotic restaurant expected to launch next year. / Image courtesy of Mezli

Bite Ninja raised $4 million for its remote staffing system. The company calls itself "the Uber of drive-thru"—allowing restaurants to use remote workers to field drive-thru orders during busy times. It said it is in the "discovery/onboarding phase" with just about every fast-food chain in America and will announce its first partners this month. Owl Ventures led the seed round, which follows a $675,000 pre-seed round in August.

Miso Robotics unveiled a new version of Flippy, the robot fry-cook. Flippy 2 can do more at the fry station than its predecessor, including basket-filling, emptying and returning. The updates are a result of feedback from White Castle, which has been testing Flippy at one of its restaurants. Employees reported that Flippy still needed human workers to load and unload the food it was prepping, so more functions were added to make the bot more fully automated. Flippy 2 also takes up less kitchen space. 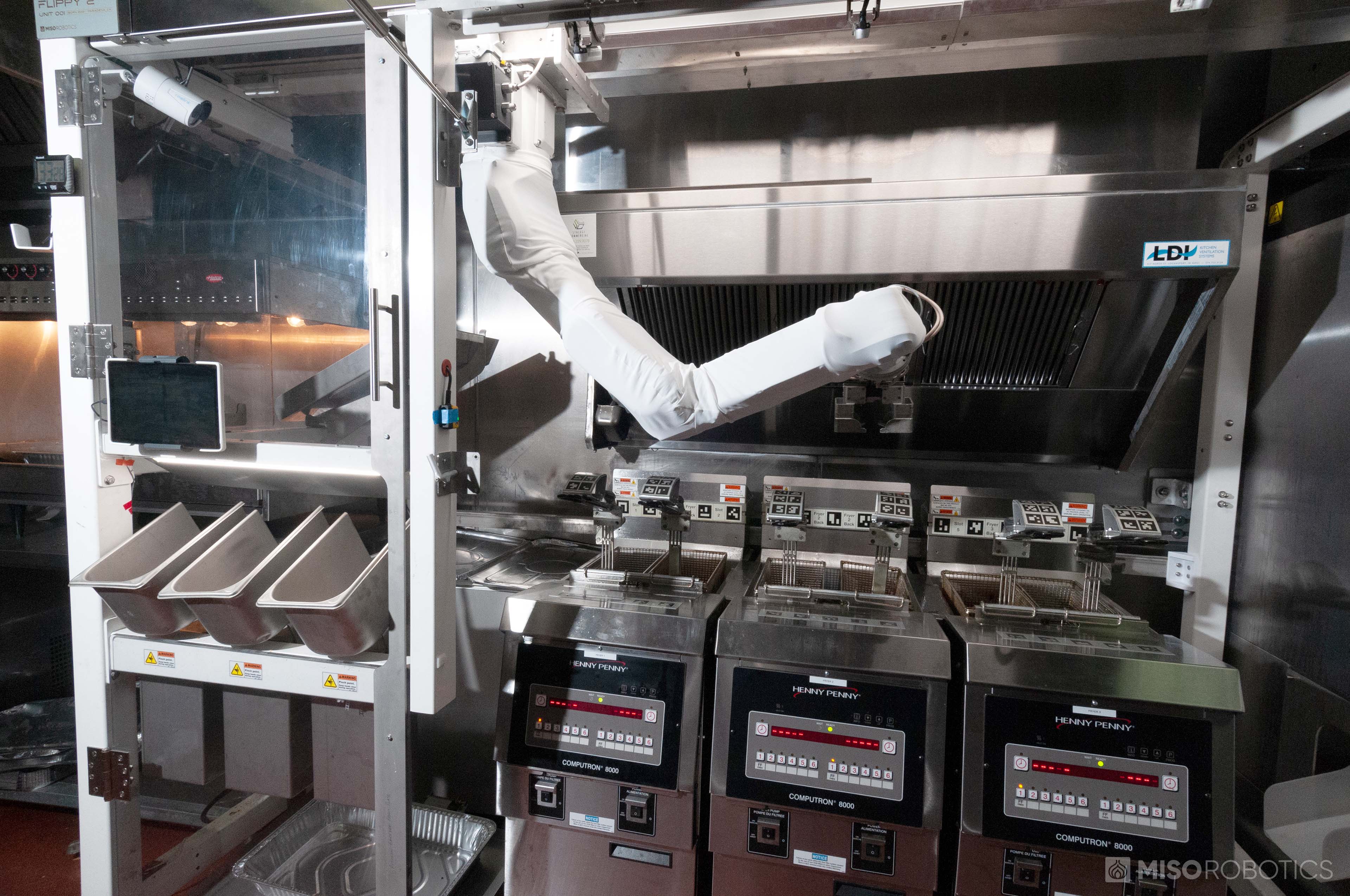 Flippy 2 can handle twice as many tasks as the original. / Photograph courtesy of Miso Robotics

Square for Restaurants integrates with ItsaCheckmate. Restaurants that use Square for ordering and payment will now also be able to use ItsaCheckmate to channel orders from multiple third-party providers directly into the POS. It also allows restaurants to update digital menus across all of those sources at once. Square works with more than 10,000 restaurants worldwide, from independents to large chains.