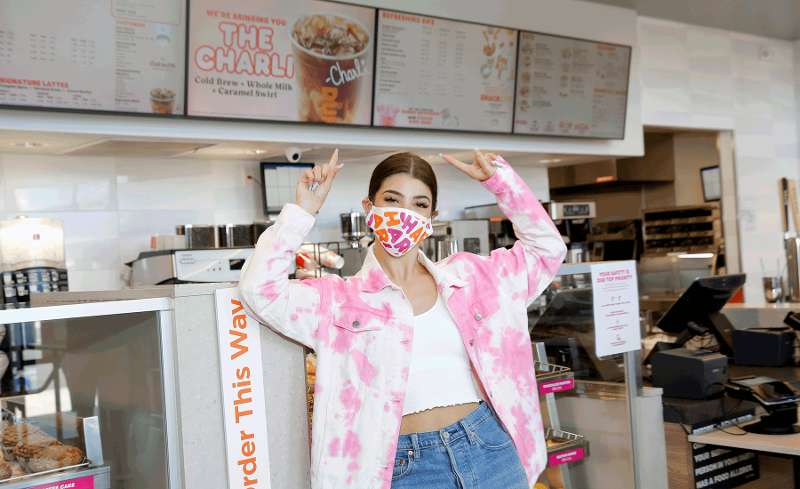 Ever heard of Charli D’Amelio?

If you’re not on TikTok—the fast-growing, video-based social media platform—chances are you haven’t. At least not prior to Sept. 2, when Dunkin’ launched a collaboration with the 16-year-old TikTok megastar—and immediately broke its record for daily active app users.

“On launch day, we saw a 57% increase in Dunkin’ app downloads in comparison to our previous 90-day average,” said Drayton Martin, vice president, brand stewardship, for the Canton, Mass.-based coffee chain, in an email.

D’Amelio, a dancer and New England native, has more than 90 million TikTok followers, making her the most-followed account on the platform. The centerpiece of her partnership with Dunkin’ is a new drink called The Charli: cold brew with whole milk and three pumps of caramel swirl—D’Amelio’s go-to order and a fixture in many of her videos. Dunkin’ sold “hundreds of thousands” of them in the first five days; cold brew sales rose 20% on the first day and 45% the next, Martin said.

The eye-popping results highlight the potential marketing power of TikTok, now one of the most downloaded mobile apps in the world. It has about 800 million monthly active users worldwide, an 800% increase since Jan. 2018, according to the company. And a significant portion of those users are teenagers: As of June, nearly a third were between the ages of 10 and 19, according to Statista.

The app is young, having been introduced in the U.S. in 2018, and still relatively small compared to other social media giants such as Facebook, with 2.7 billion monthly active users. It has also faced concerns over privacy and national security in the U.S. Most recently, President Trump threatened to ban TikTok unless Chinese parent company ByteDance divested from its U.S. operations. (That doesn’t seem to have stopped people from using it, though.)

All that could be part of the reason restaurants have yet to take to it in earnest. Chipotle Mexican Grill was the first major restaurant brand to launch a TikTok account, in May 2019. Dunkin’ joined last October, and Wendy’s, Taco Bell and Little Caesars also have accounts.

“I think people want to get it right,” said Tressie Lieberman, Chipotle’s VP of digital and off-premise marketing, when asked why more restaurants don’t use TikTok. “It’s a platform that you need to show up in the right way,” she said, adding that brands can’t just copy/paste content from their other social media channels.

“There’s just so much content [on TikTok], and it’s a different expression of content. It’s just a different level of access and learning than you can get from other platforms.” —Tressie Lieberman, Chipotle Mexican Grill

The app, with its own vocabulary and memes, has a learning curve, but Chipotle seems to have cracked the code. The Newport Beach, Calif.-based burrito chain has more than 1 million followers, and has seen views of Chipotle-related content grow fourfold—from 22 million to 92 million—since the beginning of 2020, Lieberman said.

The chain’s sole goal with TikTok is to engage with Gen Z consumers. Recent posts include a montage of baby boomers mispronouncing “Chipotle” and a list of reasons to work at Chipotle. (Reason No. 4: “You get this fire hat.”) As of Thursday, the boomer post had more than 13 million views.

TikTok has been particularly useful for simply observing what people are saying about Chipotle, which in turn helps inform its content, Lieberman said.

“There’s just so much content [on TikTok], and it’s a different expression of content. It’s just a different level of access and learning than you can get from other platforms,” she said.

For restaurants thinking about joining TikTok, listening and sharing is a good place to start, Lieberman said.

Much of the TikTok ecosystem revolves around viral “challenges.” Chipotle capitalized on this last summer with its lid flip challenge, prompting users to post videos of themselves flipping their burrito bowl lids atop the bowl. It generated more than 100 million views and a record-breaking digital sales day for the chain. Ultimately, the idea is to drive sales, “but in a really unique and engaging way,” Lieberman said.

“Most of our content is built on just creating that relationship with the brand,” she said. “You can talk about things that are sales drivers, you just need to talk about it in a way that’s authentic to the platform.”

“No rinse and repeat content from other channels,” she said. “Go all in on what makes TikTok special.”

“I’m not out there doing anything crazy. ... Trust that the video will rope people in and see that and want to go themselves.” —Brandon Murphy, Liberty Hall Pizza

Growth on the platform isn’t necessarily reserved for big brands, which can afford paid promotions and partnerships. Brandon Murphy, a 23-year-old kitchen manager at Liberty Hall Pizza in Lambertville, N.J., has accumulated more than 200,000 followers with fairly straightforward videos of himself making pizza in the restaurant’s wood-fired oven. His very first post, from last February, has more than 8 million views.

“I was joking with my boss, ‘Oh watch, this will go viral,’” he said. “A thousand views is what I was expecting.” When his shift ended five hours later, the video had already reached the 50,000 mark.

Murphy said he has spoken with TikTok, which credited his surprising success to the fact that “a lot of people are on TikTok” and Murphy is “just a real person, doing real things.”

In June, TikTok revealed some of the details behind what determines which videos show up in users’ feeds, including a user’s past interactions and the content of the video such as captions or hashtags. “Neither follower count nor whether the account has had previous high-performing videos are direct factors in the recommendation system,” TikTok said.

Liberty Hall has seen at least some business impact from its TikTok exposure—mostly teenage customers saying they’d seen Murphy’s videos. “Not a huge impact,” he said, “but every person counts.”

His advice for restaurants is to keep it simple. “Don’t try to force it,” he said. “I’m not out there doing anything crazy. ... Trust that the video will rope people in and see that and want to go themselves.”

And both Chipotle and Dunkin’ emphasized moving fast to find out what works.

“Don’t wait for a perfect strategy,” Martin said. “See what sticks and continue to build off of that.”