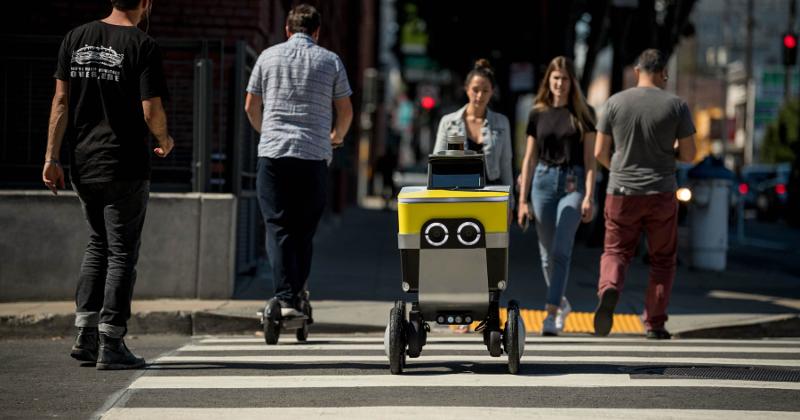 Some Uber Eats customers will soon be grabbing their lunch from a robot rather than a human delivery person.

That's because the food delivery giant is planning to enlist autonomous vehicles to cart some orders in Los Angeles starting early next year.

Uber is partnering with Serve Robotics to make it happen. Serve was formerly part of Postmates, the delivery company Uber acquired in November. Uber then spun off Serve as an independent company and took an undisclosed stake in it.

Founded in 2017, Serve's self-driving rovers have completed tens of thousands of deliveries in LA and San Francisco. The four-wheeled carts travel on the sidewalk and can cross the street, and have a delivery radius of 3 miles. A restaurant employee loads food into its compartment, which the customer can access by entering a code on a touchscreen. Uber is the company's first commercial partner.

Robot delivery will be assigned to Uber Eats customers based on availability and location. The companies are still working out the details on the fees associated with each order, a Serve spokesperson said.

The spokesperson declined to reveal how many robots would be hitting the streets for Uber Eats next year but said, "it goes without saying that Uber Eats represents a lot of deliveries." The company is the second-largest food delivery provider in the U.S., accounting for more than a quarter of all sales in September, according to data firm Second Measure.

Robots are viewed as a way to make delivery more efficient, affordable and sustainable, and they have been gaining traction all year. Late last month, digital restaurant company C3 said it is using Coco robots to deliver food in Los Angeles, and ghost kitchen companies Kitchen United and Reef are also testing it, along with numerous restaurant chains.