As a one-upmanship to the ordering capabilities Taco Bell and Chick-fil-A added to their mobile apps last quarter, Wendy’s is testing a beacon-based version of its app. While anyone can download the free Wendy’s Ordering app, only users at one of the six test sites in central Ohio can use it, for now. 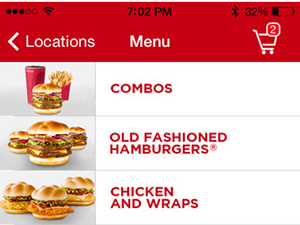 The location-based app can detect when a diner who placed an order via smartphone has arrived by reading phone signals. App orderers can either skip the line inside or queue up in the drive-thru. For the latter, their orders appear when the driver pulls up to the menu-board screen.

And it looks like this is just the start for the Dublin, Ohio-based chain. Wendy’s announced in February that it had opened a “tech lab” to test new apps and other technology. It coincides with CEO Emil Brolick saying on a February earnings call that “these initiatives are essential elements of not only our growth strategy but also our ongoing efforts to increase our brand relevance and enhance our economic model.” As such, Wendy’s plans to spend $40 million on tech-related initiatives in 2015.