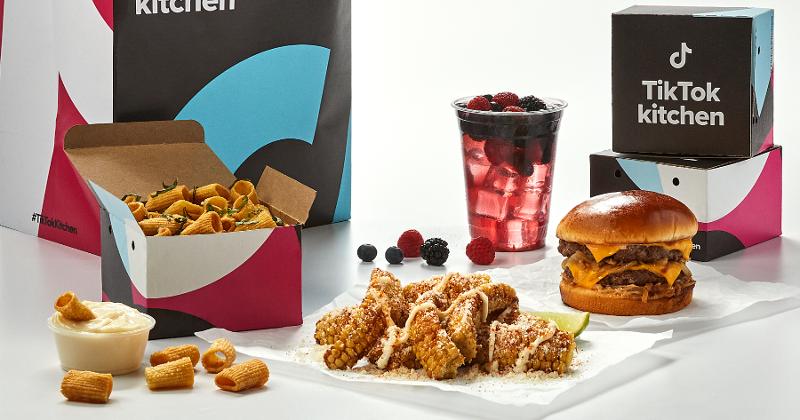 TikTok Kitchen's menu will change quarterly, though the most popular dishes could become permanent. / Photograph courtesy of Virtual Dining Concepts

The company that created the popular MrBeast Burger virtual brand is queuing up another concept that is built to go viral.

The menu, which will be available for delivery only, will feature an ever-changing selection of dishes that have gone viral on TikTok, like baked feta pasta and whipped lemonade.

The app itself is an endless scroll of short videos made by users, known in TikTok lingo as creators. Some of those videos feature recipes, and some of those recipes have blown up online, generating millions of views and even leading to reports of product shortages.

"The things that one needs to address [with a virtual brand] are very much addressed with [TikTok Kitchen]," VDC co-founder Robert Earl told Restaurant Business.

He cited the brand's ability to constantly adapt to what's popular as one thing that separates it from the average delivery-only concept. Most virtual brands tend to focus on one or two items that people commonly search for in delivery apps, like chicken wings or burgers. Earl believes that offering up the viral dish du jour will distinguish TikTok Kitchen from the rest.

The question is, will consumers make the leap from the app to the restaurant? There is evidence to suggest that fast-growing TikTok—which hit 1 billion active worldwide users in September—has an influence on what people eat. A study by marketing agency MHG found that 36% of TikTok users had ordered from a restaurant after seeing a video about it on the app.

"I think that if massive numbers of millions of people love the roasted salmon and rice and all the sauces that went with it, and they've experimented at cooking it, and also that they can now buy it, that you’re gonna have huge demand for that," Earl said.

TikTok will select what dishes from the app make it to the menu, with input from VDC and Grubhub. In addition to the aforementioned pasta and lemonade, options could include a BLT with twisted bacon, a Korean hot dog, and air-fried penne pasta with cheese dip.

Each item will be vetted to make sure it can work inside a commercial kitchen. The menu will change quarterly, but the biggest winners could become permanent dishes, Earl said.

TikTok will get part of the revenue generated by the brand, and will use it to both pay creators and encourage new ones to get involved, Earl said. He did not provide a detailed breakdown of how revenue would flow to the various parties, including the restaurants that make the food. VDC's website says TikTok Kitchen could generate up to $500 in daily profits for restaurant partners.

In addition to payment, creators will be part of TikTok Kitchen's marketing. Their names or handles might be incorporated into menu branding, or they may have a video embedded in the digital menu, Earl said.

The brand will launch in March at about 300 restaurants, joining other VDC concepts including MrBeast Burger, NASCAR Refuel and Pauly D's Italian Subs. After the announcement Friday, Earl said he was "inundated with calls" from chains wanting to sign up with TikTok Kitchen.

"They recognized that the deficiencies that can exist in the virtual brand, the majority of those are eradicated by having TikTok involved," he said. One of those deficiencies, he said, is marketing: It can be hard to get consumers to order from a restaurant they've never heard of.

"To have something that’s ever-changing and to have a brand that is not brick-and-mortar that you’re already familiar with the items that are going to be offered, that just doesn’t exist anywhere else," Earl said.