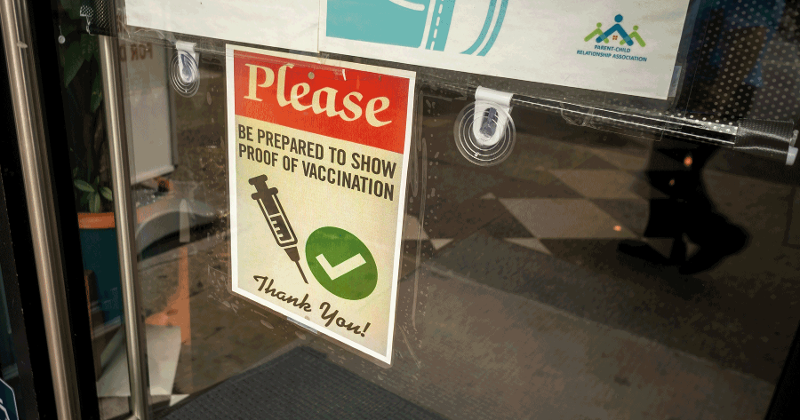 Restaurant companies employing at least 100 people will be required under an emergency directive issued Thursday by the Biden administration to mandate vaccinations or weekly COVID-19 tests across their workforces.

President Biden said he will direct the Department of Labor to draft the requirement immediately. Officials have indicated that the new rule will be enforced by the Occupational Health and Safety Administration (OSHA).

Other particulars, such as when the mandates would take effect or how the 100-employee threshold would apply to chains, have not been disclosed.

Biden’s move was welcomed by the National Restaurant Association.

“The National Restaurant Association and the restaurant industry support vaccination for everyone because higher vaccination rates are our best bet for containing the spread of COVID-19,” Sean Kennedy, the group’s EVP of public affairs, said in a statement. “Our COVID-19 Operating Guidance best practices continue to suggest that all restaurant employees be vaccinated if possible.”

But, he added, addressing a major concern of operators, “While we appreciate the intent of this executive order, we hope that the Administration will work with us to take into consideration the unique operations of restaurants when creating the guidelines for implementation.”

Remembering the friction that arose in enforcing face mask requirements, many operators have voiced fears that an employee vaccine mandate could strain relations with a workforce that’s already demonstrating deep dismay with the industry. The level of quitting restaurant jobs has never been higher, according to a recent report by Snagajob and Black Box Intelligence.

The mandate came despite Biden’s repeated indications that he doesn’t believe the federal government has the right to impose a universal vaccine mandate. But the employer requirement will likely extend the safety requirements to tens of millions of workers.  Biden estimated that two-thirds of the U.S. workforce would be affected by the new rule.

Restaurant employees are already required to provide proof of vaccination or a negative COVID test in San Francisco, New Orleans, Philadelphia, Honolulu and two counties in Seattle. New York City joins their ranks on Monday. Those jurisdictions also require consumers wishing to dine inside a restaurant to prove they’ve been inoculated or have recently tested negative for COVID.

Some companies in the industry, including McDonald's and Disney, have required that headquarters staffers be vaccinated.

No state has mandated the inoculations, though lawmakers in California have aired several proposals. Most recently, two state lawmakers proposed mandating employers to enforce a vaccine requirement, but they backed away from their proposals just as the state’s legislative year was ending.

During his speech, Biden noted that 80 million Americans—about 25% of the population—has yet to get even one vaccination shot.

“The vast majority of Americans are doing the right thing,” the president said. “At least three-fourths of those eligible have gotten at least one shot.” That amounts to 175 million people, he indicated, but stressed that the gap in protection is still too large to bring the spread of the delta strain of coronavirus under control.

“We must increase vaccinations among the unvaccinated,” Biden said. “The time for waiting is over. This is not about freedom or personal choice.”

He also revealed that he will air a new, more comprehensive plan in the coming weeks to prepare the nation for any future pandemics.

“Get vaccinated,” he said in ending his presentation.